You are here: Home / Blog / RV Travel Tales: Bears in the Park
This post may contain affiliate links or mention our own products, please check out our disclosure policy here. 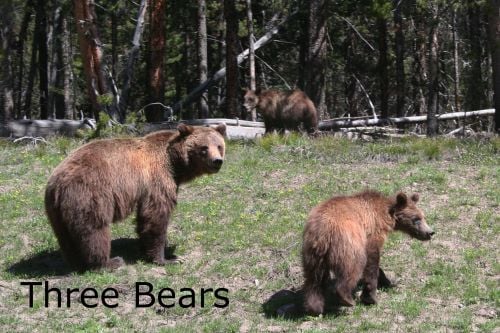 Grizzly and black bears are residents of Yellowstone National Park. In West Yellowstone, Montana, the western gateway to the park, shops up and down the small town’s streets display figurines or stuffed images of soft cuddly bears for visitors to take home with them. Many of the souvenir or home décor items depict  bears tumbling in play, fishing from manmade canoes, or even in nativity sets. One in particular is a Father Black Bear sitting in a chair, reading a book to his cub. We look at these figures and think…cute, loveable, and huggable. But bears are wild creatures and in Yellowstone and other national parks, they live out their lives in the wild—doing what bears are supposed to do. They forage for food, and often kill other animals for a meal. They raise their young. And they protect their cubs and their territories.

In Yellowstone, particularly, when a guest catches sight of a bear near the roadway, cars form a city-sized traffic jam. People jump from behind their wheels—often leaving a vehicle in the middle of the highway—grab a camera and take off to get that once-in-a-lifetime shot. I watched a Mama Black Bear with two cubs forage close to a main road through the park. Dozens of people, peering through camera lens, moved dangerously close to the sow. She continued scavenging while her cubs ran up and down trees. But if she had felt the slightest threat, that Mama Bear would have charged and perhaps, mauled an onlooker. Bears are not the cutesy models that we see in stores. One bit of information said bears seem to experience moods like humans. And we like to give human attributes to them—such as shyness, curiosity, and loveable natures. But they can be aggressive. Encountering a bear is no different from encountering any other individual who might act differently depending on the situation. Bears are basically solitary animals. Each has its zone of danger or personal space, which varies from animal to animal.

The warning material went on to say that many attacks from bears are caused by close encounters. The bear is surprised or feels threatened by human presence. Most bears are timid enough to flee a possible face-to-face meeting. Many attacks can be avoided if the bear sees a way out of the situation. Since we take hikes in Yellowstone, we bought bear spray. The instructions are downright scary:

? Be aware in bear country. (Our parks and forests are THEIR homes. We are trespassing.) Some common areas that bears frequent are avalanche chutes, streambeds, dense edges of cover, and in late summer, berry patches.

? A person who runs when frightened by a bear may trigger a chase response. A bear can reach speeds of 30 to 35 miles per hour in a split second and can cover 50 yards in less than three seconds. Never try to outrun a bear.

? A bear that stands on its hind feet is usually trying to get a better look and smell by sniffing the air. This is not necessarily an aggressive posture. (But how do we humans know?) A bear that swings its head from side to side or turns sideways from you is expressing reluctance to charge and is looking for a way out. If a bear looks you directly in the eyes and lays back its ears, you are too close and the bear feels threatened. A bear may also make barking, woofing, or moaning sounds to indicate he/she is threatened. If a bear “pops” its jaws, it is very agitated and most often will charge. Or it may not show any signs at all and drop and charge with no warning. (Now how comforting is that?)

? Stop, stay calm and quiet, and make no sudden moves. (Wow! How hard is that? I hope I never have to find out!)

? Break eye contact if a bear is acting aggressively. Do not stare in the bear’s eyes.

? Stand your ground. Do not turn your back on the bear. Have bear spray ready, but do not spray unless you are sure the bear is close enough to spray in the face.

? Back away slowly, speaking in a calming, monotone voice, showing the bear that you are being submissive and want to get out of “its” territory. Keep bear spray ready.

? If a bear charges, spray the deterrent at the bear’s face, or spray a fog out that the bear has to run through to get to you.

? Do not yell or scream! (Again, wow! Sometimes a scream comes out when you don’t even know it!)

? If a grizzly or black bear makes a surprise attack at close range—and you don’t have bear spray—roll into a ball or lie face down. Try to protect your neck and face. Do not stick out an arm, kick, scream, or fight. Try to protect the vulnerable parts of your body while remaining as still as possible. (Now can I remember that in a crisis?)

Bears are unpredictable. Yet, there are four situations that are most likely to cause a bear attack.

1. When a person encounters a protective sow with cubs. An average of 80% of all bear attacks are related to a mother’s protection. (Those of us who are mothers understand this protective mode. Keep a distance from Mama Bear and her babies!)

3. When a human gets too close to a bear’s food supply. Beware of a bear feeding on a carcass—or even a berry patch!

My instructions say I will panic if I have not trained and practiced what I need to do in these situations. Oh my! I’d better holster my bear spray and think this through before hitting a trail!