You are here: Home / Blog / RV Travel Tales: Crystal Bridges in the Ozark Woods
This post may contain affiliate links or mention our own products, please check out our disclosure policy here. 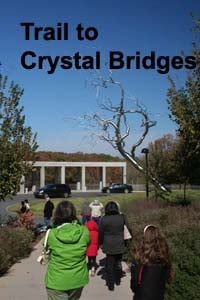 A world-renowned museum of American art nestled in a hollow of Arkansas back woods? Yes! Envisioned and founded by Walmart heiress, Alice Walton, Crystal Bridges blends art and nature into a seamless experience. Designed by architect, Moshe Safdie, the curved pavilions appear to float on the pools created from the waters of Crystal Spring. David Cateforis, a professor of art history at the University of Kansas, stated in the Arkansas Democrat-Gazette that the collection is not as vast as that of other museums, but few other museums have the resources to afford some of the costlier pieces Crystal Bridges has acquired. Media spokesperson, Diane Carroll, says that one year after the museum’s opening on November 11, 2011; its collection has grown to include a total of 2,040 artworks. Acquisitions in 2012 included five sculptures, eight paintings, one mixed media work, and 504 works on paper, which includes drawings, photographs, watercolors, and a collection of 468 prints made by American artists between 1925 and 1945. Approximately fourteen other sculptures accent the numerous trails over the Ozarks woodlands surrounding the museum.

On the crisp autumn day that Lee and I visited, we followed a paved trail on the museum property—about 120 acres of former Walton family land—from the crest of a hill to the upper level of the 201,000 square foot museum, mostly hidden from a curbside view. A full-sized silver tree created at the entrance by artist Roxy Paine first captured our attention. We descended by elevator to the clear red-oak floors of the multi-tiered complex. Nine independent curved buildings include six galleries, meeting rooms, a restaurant, a museum shop, and an event space known as the Great Hall. The copper-topped pavilions appearing as “bridges” reflect in the ponds. Thus, the name Crystal Bridges comes from the concept of galleries like bridges and the Crystal Spring.

In an introductory video, founder Alice Walton tells that she grew up on the property, playing “cowboys and Indians” with her brothers while hiding from their mother. Walton says: “I always loved art and did watercolors with my mother. I wanted to go to art museums, but my brothers did not. Besides, we had no such museums close by.”

While in adulthood Walton nurtured her dream of a world-class museum focusing on American art. She envisioned the museum on that particular site because of its integration to her hometown, Bentonville, Arkansas. Bentonville, a typical American town with a population of about 35,000, is also corporate headquarters for the company her father started with a Five & Dime Store on the town’s square.

“Art taught me a history of our country that I’d never learned,” Walton says. “American art showed me a belief I’d never seen in history books, and a totally different perspective of our country. I wanted to build a place that integrates with the Ozarks’ natural beauty—a space to be a part of the community, to be flexible and usable. This whole effort is much bigger than I.”

In a quote from the New York Times in June prior to Crystal Bridge’s opening, she said: “I thought this (museum) is something we desperately need, and what a difference it would have made were it here when I was growing up. I would never have thought of collecting anything but American (art), truly. This is the heartland of the country. It’s what should be here.”

Walton chose architect Moshe Safdie to design her vision. In the same introductory video, he says: “Upon seeing and walking this land, my heart felt what this is—what it could be. I loved the site for its beauty and its connection to the town. We wanted to have the indoor and the outdoor experience. We took nature to another step and tried to frame it, merging nature and art. The building of the museum was the beginning of a fairy tale.”

NBC’s Today Show highlighted Crystal Bridges Museum of American Art in Bentonville, Arkansas, as one of the 12 greatest new vacation spots for 2012. Over 500,000 people visited in its first year. As guests come and go, they experience the museum’s permanent collection spanning five centuries of American masterworks ranging from the Colonial era to our current day. The permanent collection, which is on view year-round, is further enhanced by a selection of ongoing temporary exhibitions.

Set against the natural backdrop of the Arkansas Ozarks, 2013 will prove an even greater vacation destination. David Wright, director of guest services at the museum acknowledges that people come to Crystal Bridges from all walks of life. Many are first-time museum-goers who state they do not frequent museums or art galleries. Yet, Wright notes a common thread. “Our visitors seem changed when they leave,” he says. “They express a level of excitement that begins with the silver tree out front.”

Lee and I experienced that fascination—that enthusiasm—that excitement—as we moved through the galleries, eyeing “Indians of Virginia” by James Wooldridge, the earliest painting in the museum. Looking at this painting and many others depicting early Native American life, I understood what Alice Walton meant by learning American history through art. This particular painting went back to engravings by Theodore de Bry, and those engravings went back to watercolors by John White. Karl Bodner worked in hand-colored aquatint to paint detailed images of Fort McKenzie Trading Post back in 1833.  Fine detail down to bead work and feathers in a chief’s hair highlight images of Fort Clark and the Mandan tribe. The sharpness of the paintings of early Americans appealed to me, especially a later portrait of a father, mother, and two daughters as clear and bright as a digital photograph.

Throughout the galleries, I noted different mediums in the collection, including oil painted on paper and mounted on board, and sometimes oil paintings on mere board. As expected, many paintings, such as “Home by the Lake” by Frederic Edwin Church and set in New England in 1852, are oil on canvas,. “Backwoods of America” by Jasper Francis Cropsey reveals pioneer American life in the 1800s. One of the earliest surviving views of an American city is captured in “View of St. Louis” by Leon Pomarede. Francis Guy painted “Winter Scene in Brooklyn.”

“War News from Mexico” depicts society’s classes in a time when only white educated men held offices and could read. The painting shows men with shocked faces sitting on the porch of a hotel while reading the news of the war in Mexico. A woman is relegated to a background window in the hotel, defining the status of women in general at that time. A black man and little boy in tattered clothing are squatted in the foreground, clearly indicating they could not relate to the news.

“Arkansas Traveller” by Leopold Grozelier is a hand–colored, toned lithograph dating back to 1859. Some paintings are described as oil on panel. Three by Joseph Decker are painted on an artist’s palette, incorporating the thumb hole into a boy’s mouth. Joseph Decker also painted “Basket of Peaches,” realistic enough to see peach fuzz, taste the juice, and smell the heady fragrance. Other mediums include oil, graphite, and screen print, tempera on panel, cast aluminum, cast polyester, pictorial weaving in cotton and bast, and painted wood. Included within the collection are iconic images such as Asher B. Durand’s Kindred Spirits, Norman Rockwell’s Rosie the Riveter, and Andy Warhol’s Dolly Parton, each reflecting a distinct moment in American artistic evolution. In addition to historical works, the Museum’s collection also showcases major works by modern and contemporary American artists, including Roy Lichtenstein, James Turrell, and Georgia O’Keeffe. Within Crystal Bridges, some medium—some form of artwork—appeals to every individual.

For me, one of two fascinating exhibits is Evan Penny, a self-portrait in sculpture using silicone, pigment, hair, fabric, and aluminum. The bust hanging on a wall is realistic enough to be scary. The skin reveals every wrinkle—and the chin looks as though he has a day’s growth of beard. Standing before this sculpted head and shoulders, I expected the man to speak. The docent told us thatEvan Penny created the character Gollum in the movie “Lord of the Rings.”

The other amazing piece, “After Grant Wood (American Gothic) 2” by Devorah Sperber, is a wall hanging of  986 colored spools of thread hanging on silver ball chain from a piece like a cornice rather high on the wall. The spools of thread appeared to be in random order. I watched two young boys peering through a small glass ball on a stand, but had no idea what they were seeing. When they moved away, I looked through the acrylic ball, and the “American Gothic” came to life. According to the artist’s explanation, the clear acrylic sphere placed in front of the work shrinks and condenses the thread spool “pixels” into a recognizable image while also rotating the imagery 180 degrees like the human eye. Sperber states that she is interested in the link between art, science, and technology—how the eyes and brain prioritize, and reality as a subjective experience versus an absolute truth. Pretty heady, isn’t it? Yet, this exhibit emphasizes that Crystal Bridges offers something of interest to all ages and tastes.

Crystal Bridges’ restaurant, Eleven, offers a limited menu, but the food is excellent. We ordered at a counter like other fast-food eateries, but we were served at our tables on real plates with cutlery. Drinks were served in glasses. The prices were reasonable, and the view of Ozarks hillsides reflecting in pools on each side of the restaurant pavilion provided a pleasant dining experience. As old timers in the Ozarks say, “Sit on the porch, (or in this case, in the restaurant or one of the ‘thinking rooms’ connecting the galleries) relax, and breathe in the beauty of the place that’s not too far from heaven. You’ll be glad you did!”

General admission to Crystal Bridges is sponsored by Walmart. There is no cost to view the Museum’s permanent collection. Admission fees may occasionally apply to view temporary exhibitions.

Closed on Thanksgiving and Christmas. Crystal Bridges Trails and Grounds are open from sunrise to sunset daily.