You are here: Home / Blog / RV Travel Tales: Definition of a Champion
This post may contain affiliate links or mention our own products, please check out our disclosure policy here. 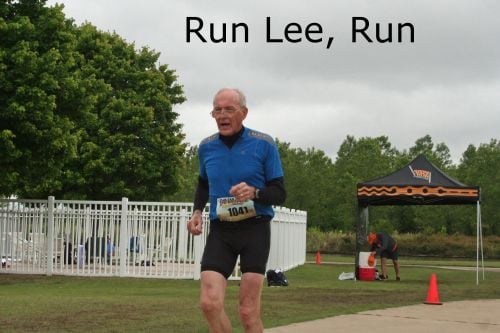 What defines a champion? The dictionary uses descriptive words like warrior, fighter, and defender. However, the fourth definition states: a winner of first prize in a competition. That would describe my husband, Lee Smith—at least in relation to his status as a triathlete. (He’s more than a warrior, a fighter, and a defender, although at times in his life, he’s all of those things, too.) On May 18, 2014, Lee won the first place trophy in his age category at the Memphis in May Triathlon with a time of four hours, one minute and 55 seconds. That was not the best time in the event. In fact, it was Lee’s slowest time ever. Yet, a lot more goes into being a champion than the time at the finish line.

First, comes the training. Lee consistently and on a weekly schedule ran, biked, and swam—sometimes doing swimming and bicycle riding in the same day. Yet, even before the training the heart of a champion beats with a passion that only an athlete understands. It’s a competitive edge that’s not necessarily in a contest with others, but with one’s self. It’s dedication, commitment, and perseverance to stretch one’s body to the limit.

The 2014 Memphis in May Triathlon was not Lee’s first event. Although he always loved a game—a race—an event that challenged him, he started serious run training at age 43. He bought books and studied magazines for the correct training procedures for marathons and entered marathons in more than a dozen cities, including Boston and Chicago. To celebrate his 50th birthday, he competed in the Iron Man Triathlon in Hawaii. He has participated in at least six Memphis in May Triathlons, each one different, with different times and trophies, and even three different locations.

In 2014, the Memphis in May Triathlon happened at Harrah’s Resort in Robinsonville, Mississippi. Why a Memphis event in Mississippi? When Harrah’s sponsors the triathlon, the company chooses the location. Their beautifully landscaped resort area includes a deluxe RV park, two hotels, a convention center, and a lake suitable for the swimming event. We made ourselves at home in their Mid-South RV Park. On Saturday before the event, Harrah’s catered a dinner under a spacious white tent on the lawn of the Veranda Hotel.

However, shortly following the dinner, rain fell. And fell and fell. All night, rain hammered the roof of our motorhome. The swim started at 7:00 a.m., so we arose early and drove to the venue. Swimmers entered the water according to their numbers, one every three seconds. Wearing a wet suit, Lee splashed into the 68-degree water about 7:50. Despite training and his strength in swimming in our community’s Olympic-sized pool, the cold lake water stymied him. With patience and perseverance, he completed the .92 mile swim, but  took a hit with his time. The rain had reduced to a drizzle while he—and approximately 600 other participants—were submerged in the icy lake. But the transition area in which the swimmers transferred to pull off wet suits and get into biking clothes and pick up their bicycles looked like foot–deep chocolate pudding. Bicyclists carried their bikes on their shoulders, shoes in hands, through a deep puddle at the entrance gate. Lee slogged through the mud and water and sat on a curb to put on his bicycle shoes. Although the slow swim had put him at the end of the racers, he did his usual time on the bicycle (25 miles), arriving at the dismount area ahead of at least three others. He raced back to the transition area to park his bicycle and pick up his running shoes. Again, he did well in the run (6.2 miles), taking the finish line with his final time almost two minutes over four hours. At age 75, Lee was the oldest participant in the 2014 Memphis in May Triathlon. He carried home a pyramid-shaped trophy. Is he a champion? To me, he’s champion of the entire event!