You are here: Home / Blog / RV Travel Tales: Digging Up the Past at El Museo de las Momias in Mexico
This post may contain affiliate links or mention our own products, please check out our disclosure policy here. 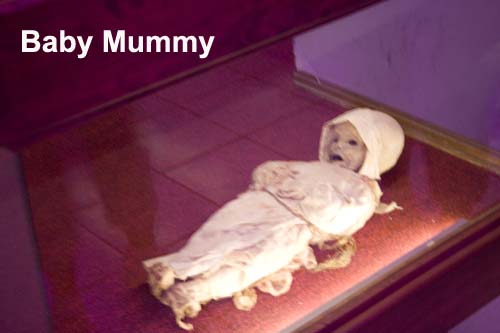 Grotesque, ghastly—even ghostly—whisper visitors to El Museo de las Momias, translated The Mummy Museum, in Guanajuato, Mexico. Located above the municipal cemetery of Santa Paula, the most famous tourist draw in that part of Mexico started attracting the curious in the early 1900s. On a trip with a group of Escapees, we discovered this museum—a kind of house of horrors. Yet the exhibits were natural, not designed to scare like the spook houses folks in America set up around Halloween.

Displayed in glass cases, the mummified corpses of young and old recline on soft pillows, some with expressions of horror forever fixed on their skulls. Most guides agree that the skeletons were “dug up” between the years 1896 and 1958 when a local law required relatives to pay a grave tax for five years. Deceased relatives of families too poor to pay the tax were exhumed.

Workers assigned to the gruesome grave diggings discovered that the bodies had dried out naturally before they could decompose. A combination of mineral salts in the soil and a dry climate of the mountainous area resulted in accidental mummification. Some of the skeletons have hair; a few wear tattered clothes.  Remnants of boots cover several shin bones and feet. Legends abound in the silent, eerily illuminated rooms. However, I tried to remember that these were people—folks with dreams, sorrows, needs, and desires—just as we were people looking upon their remains.

The museum displays two French doctors positioned in upright glass cases, each attired in remarkably preserved long black coats, white shirts, and ties. I wondered about their stories. Why were they in Mexico? A tiny baby is noted as the world’s smallest mummy. She was someone’s child; a mother grieved over her loss. Over 100 original mummies lie in state in Guanajuato’s museum. Other natural mummies likely rest in the cemetery, but those bodies will remain under the soil, buried after the law no longer required a burial tax.

The museum, located on the northwest end of Guanajuato at Esplanada del Panteón, is open daily. So for those looking for something different to celebrate Halloween, travel south of the border to Guanajuato.