You are here: Home / Blog / RV Travel Tales: Exploring the Combat Zone
This post may contain affiliate links or mention our own products, please check out our disclosure policy here. 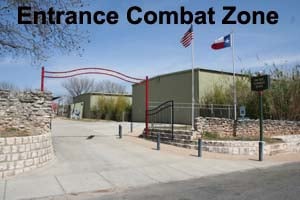 At the National Museum of the Pacific War in Fredericksburg, Texas, the Combat Zone is a separate location on the museum’s campus. A unique three-acre indoor and outdoor exhibit and living history venue about a block down the street from the George H.W. Bush Gallery of the museum, an interpreter narrates a tour every hour on the hour during the daytime between 10:00 a.m. and 4:p.m.

We started our tour in a simulated hangar deck with our focus on a TMB Avenger torpedo bomber being readied for a strike. For our hour, we drew an informed and entertaining interpreter who filled in information about every aspect of the war featured in the Combat Zone. We moved from the hangar to an exhibit area featuring Patrol Torpedo Boat-309, the only restored World War II combat veteran Higgins class PT boat on public display in the United States today. Its setting is a dock in the south Pacific, standing ready for a night mission. Our interpreter gave facts such as the boat’s launch date in January 1944, and its importance because the wooden structure was undetectable by radar. At 78 feet in length, the Higgins Motor Torpedo Boat had a draft of five feet and six inches. He explained the armament of guns and torpedoes on roll-off racks.

The PT-309, stationed in the Mediterranean, is credited with firing over 100 torpedoes and sinking five enemy ships during WWII.  Post war years, the PT-309 operated as a charter fishing boat out of Greenport, New York. She was purchased in 1994 by the Admiral Nimitz Foundation for the museum. She sailed under her own power from New York to Galveston, Texas, a 45 day journey. For nearly three years, a volunteer crew that included Seabees from the Houston, Texas, area, worked on the boat’s restoration. They replaced more than a quarter of the boat’s original planking.

Our tour group moved out of the buildings and onto the battlefield, replicated to signify the island of Tarawa. The guide first showed us a land transportation vehicle—just like the ones I’ve seen in movies with troops spilling out onto a beach front. Our group walked up the ramp and stood inside to get a sense of what the men going into battle might have felt. The interpreter said that in addition to the tenseness and apprehension of facing enemy fire upon landing, the seas were typically choppy. Many of the soldiers packed into the vehicle experienced seasickness.

Paved walkways circle the battlefield representing the beaches of Tarawa; our guide explained that the Japanese were masters at building tunnels that connected one sand bank fortification to another. Six times annually reenactments of the battles take place on this simulated beach. On those dates, soldiers from each side dramatically fight with realistic arms and ammunition. Covered bleachers stand to one side to accommodate large crowds—and stave off the hot Texas sun.

We continued circling the grounds while our guide explained the different military vehicles tucked into pockets of tropical cane breaks and vegetation. Near the exit, a memorial with white crosses designates the different branches of our military forces. A visit to this mock combat zone brought the reality of a cruel and sacrificial war to life.