You are here: Home / Blog / RV Travel Tales: First Impressions of Yosemite—First Impression of Me
This post may contain affiliate links or mention our own products, please check out our disclosure policy here.

Growing up in small-town Arkansas, I dreamed of being in scenes that I saw on large calendars given from our local banks to customers. Scenes of Yellowstone, Grand Canyon, Cape Flattery, and Yosemite. Someday…when I grow up…I’d say to myself. I had almost grown old before that “someday” arrived. In the first year of our marriage, Lee took me to California to meet his brother, and to Yosemite National Park. Fifteen years older than Lee, brother Glenn knew Yosemite like a well worn map, having ridden many of its trails on horseback. Others, he hiked even long years after he stopped straddling a horse.

The morning we set out to explore Yosemite’s Valley and the waterfall I’d only seen in pictures, I should have known better than to climb into the backseat of Glenn’s spacious, spotless Cadillac. But then, I didn’t know my new brother-in-law whizzed around those curvy roads. And he did not know that I get motion sickness! About halfway up to the park from his California home in Madera, I asked if he would stop and let me ride in the front. But it was too late. I was already sick. We stopped and picked up some lunch at a deli and I got a bottled soda. That helped a little. Once we got to the park and we started climbing the sandy trail to Sentinel Dome, I breathed in the scent of pine needles and thought surely the fresh air would settle my queasiness. For a time, it did. The hike to its base ascended gradually through the forest. Glenn, whose career had been in the California sawmills, named the species of trees, noting the different barks. For over a mile, we hiked under their gently swaying boughs. At the base of the dome, we scrambled over a slope of loose bedrock to reach the rounded summit of gray granite.

Sentinel Dome rises 8,122 feet above sea level—not the highest point on the rim of the Yosemite Valley. Although Half Dome, one of the park’s best-known landmarks, has a higher elevation, on that particular day in June, I felt on top of the world. Offering a 360-degree view of the valley’s meadows, waterfalls, El Capitan, Half Dome, and other tall granite cliffs, Sentinel Dome was the perfect spot to sit and drink in the natural beauty of Yosemite. I wonder if Native Americans, prospectors, explorers, and mounted soldiers had perhaps sat in silence on that same dome of rock and contemplated the majesty of nature. 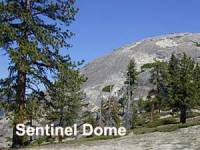 In crevices and cracks in the weathered old rock, Indian paintbrush and phlox had rooted and bloomed, adding splashes of color to the granite gray. At the time of our visit, the much-photographed lone Jeffrey pine stood, twisted and brown—a  testimony to decades of resistance to the elements. Since then, the ancient tree has fallen.

We left Sentinel Dome and took our boxed lunches to a viewing area for Half Dome, a massive chunk of granite that appears to oversee Yosemite Valley from the east end. As we sat on bleacher-styled benches and munched sandwiches, we saw climbers—looking like bees against the mammoth mountain—readying themselves to follow the cabled trail to the top. (Permits to hike to the top of Half Dome are required seven days per week when the cables are up.)

I thought my motion sickness had subsided, but still I asked to ride in the front passenger seat on our return trip. However, my head began to pound like a sledge hammer hitting my skull. I felt nauseated again. I asked my brother-in-law to please pull over, but there was no place on the narrow winding highway. I could not wait; I threw up into a sweatshirt in my lap, soiling his luxurious car! Later, I realized that I likely had a combination of motion and altitude sickness.

My first impression of Yosemite was magnificent. We returned for more days in the national park. My new brother-in-law’s first impression of me? Questionable!  However, he did visit us later in Arkansas. And I was blessed to be at his bedside for the last days of his life. He would be as sad as I am today to see television news of the flames leaping up and over the pines in our beautiful Yosemite.