You are here: Home / Blog / RV Travel Tales: Fort Sumter: History in Charleston’s Harbor
This post may contain affiliate links or mention our own products, please check out our disclosure policy here. 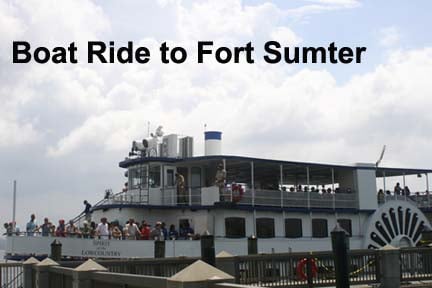 For two decades, I’ve known Henk and Georgia Parsons and followed their extraordinary volunteer Workamping assignments. I have envied them—not in the sense that I wanted their jobs—but I am intrigued by the experiences they have had with American history. For a time, they volunteered at Fort Sumter in the Charleston, South Carolina Harbor; Henk divided his time between the famous fort that received the first volleys of cannonballs in the Civil War and Fort Moultrie, the federal fort occupied by Union soldiers. Fort Moultrie is the name of a series of fortifications on Sullivan’s Island, South Carolina, built to protect the harbor city of Charleston. Fort Moultrie is the only area of the National Park System where the entire 171-year history of American seacoast defense (1776–1947) can be traced. During his assignment with the National Park Service, Henk immersed himself in the history of these forts. While he read accounts of both the American Revolution and the Civil War and talked to visitors at Fort Sumter, Georgia transcribed into computer files original correspondence of George Washington, South Carolina governor Charles Pinckney, and other notable figures during the American Revolution.

Likely, I will never have the opportunities of Henk and Georgia Parsons to soak up the history of Charleston during the Revolutionary and Civil Wars. However, prior to a trip to that South Carolina city, I read 1861: The Civil War Awakening by Adam Goodheart, Civil War Wives by Carol Berkin, and Charleston by John Jakes. (I recommend all three to readers interested in American history.) While visiting Charleston, we took a 30-minute ferry-type boat ride to Fort Sumter.

Knowing the background of South Carolina seceding from the Union on December 20, 1860, helped me imagine the layers of history involving the forts that protected the city. Despite dwindling supplies of foodstuff and ammunition for his 127 men, Major Robert Anderson, commander in charge at Fort Moultrie, chose six days after South Carolina’s secession to quietly shift his small garrison to Fort Sumter for stronger fortification. According to Goodheart’s 1861, Union soldiers had watched from their post as Charlestonians paraded their uniformed and plumed regiments around the promenade now called The Battery. Tensions mounted and tempers boiled, both on land and in the harbor. On February 8, 1861, other states in the Deep South joined South Carolina to form the Confederate States of America.

On April 11, 1861, General P.T. Beauregard, commander in charge of the Carolina army of the Confederate States, sent three aides, to demand the surrender of the fort. Major Anderson declined and considered his options. At 3:00 p.m. Major Anderson countered with his conditions. The aides left the island and headed for nearby Fort Johnson. At 4:30 a.m. on April 12, 1861, Confederate troops shelled Fort Sumter from Fort Johnson, firing for 34 to 36 straight hours on the fort. The Union returned fire slowly to conserve ammunition. At night the fire from Fort Sumter stopped, but the Confederates still lobbed an occasional shell into Sumter. On Saturday, April 13, Major Anderson surrendered the fort and evacuated his men. The Civil War had begun.

Originally, Fort Sumter was a five-sided brick structure with walls five-feet thick and standing 50 feet tall over the low tide mark. Seventy thousand tons of granite imported from New England built up the sand bar on which the fort stood.  Dominating Charleston Harbor, the fort was designed to house 650 men and 135 guns in three tiers of gun emplacements. However, the fort never filled its capacity. Reduced to a rubble of brick and granite following the Civil War, reconstruction started, but from 1876 to 1897, Fort Sumter was useful only as an unmanned lighthouse station. The structure eroded more over time. Reconstruction started again at the beginning of the Spanish-American War and in 1898, a massive concrete blockhouse-style installation was added within the original walls, but the new installation was never used in military operations.

Before boarding the ferry, we spent time in the Fort Sumter Visitor Education Center—the only “free” museum we found in Charleston. The Visitor Center displays exhibits and photos of the history and the culture of Charleston, focusing on the disagreements between the North and South that led to the incidents at Fort Sumter. One exhibit explains that the Civil War’s explosion in Charleston Harbor culminated a half-century of growing sectionalism with issues of property rights, human rights, states rights, and constitutional rights dividing the young country. Of course, underlying all the economic, social, and political rhetoric lay the hot-tempered question of slavery. Charleston—in fact, South Carolina and other deep Southern states—had built their economy on enslaved labor to plant, cultivate, and harvest their crops of rice, indigo, and cotton.

Taking time to read the posters and take in the photos in the Visitor Center gives one a clear overview of how the colony of Charles Towne evolved into the social and economic center of the South. The museum at Fort Sumter focuses on the activities at the fort, including its construction and role during the Civil War.

Although best-known today for its part in the American Civil War, the fort was originally built following the War of 1812 in an attempt to further secure the Mexican–American border. Built chiefly with slave labor, Fort Sumter was actually unfinished in 1860 at the start of the Civil War. Interesting history surrounds the brick making that went into the fort’s construction, as well as most of the houses and commercial buildings in Charleston. No stones lie in and around the seaport of Charleston; yet stone or brick was the preferred building material due to a constant threat of fires. Charleston improvised. The low country had clay soil and slave labor to form and bake bricks. Tides from the Atlantic bring an abundance of oyster shells to the harbor shores. Tabby, a type of mortar mixed with those shells, cemented the handmade bricks together in the original construction of Fort Sumter, as well as in the 1870s when the fort was repaired.

On certain plantations in the Charleston area, brick making by slaves took place in the off-season from agriculture, in months when crops were not planted or harvested. In the history of brick making, estimations state that 100 slaves turned out a million bricks in a single year. The pinkish-red color of Carolina brick is evident today in Fort Sumter and other structures in the city.

We stepped aboard the boat with Fort Sumter Tour Company at Liberty Square in downtown Charleston. The company also departs regularly from Patriot’s Point. An admission fee is charged for riding the boat, but touring Fort Sumter and its museum is free. The fort is open 9:00 am-5:00 pm daily. Visitors can wander about the old fort on their own schedule or listen to a museum tour led by a park ranger. Rangers and volunteers are available on the grounds to answer questions. Expect a tour to take about two hours.