You are here: Home / Blog / RV Travel Tales: From Cows in a Barn to the Epic Adventure of Jonah
This post may contain affiliate links or mention our own products, please check out our disclosure policy here. 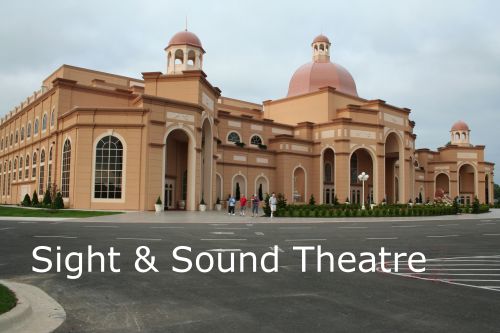 Glenn Eshelman is a Pennsylvania farmer—a man of the dirt, he describes himself. However, Eshelman is also a creative artist, a man who believes in using the gifts God gave him to bring Bible stories to life in musical productions on stages of his theatres in Strasburg, Pennsylvania, and Branson, Missouri. The productions, built upon Bible heroes such as Noah, Moses, Joseph, Daniel—and “Jonah,” premiering this season in the Sight & Sound Theatre in Branson have been a gradual step-by-step process. “I believe that God has led this ministry show by show, dollar by dollar, and building by building,” Eshelman says.

Eshelman’s interest in art started in his childhood. His landscape paintings led him to photograph inspirational scenes that were presented to churches, schools and civic organizations across the United States. He and his wife, Shirley, used a single slide projector and screen, along with a turntable and microphone to provide sound—a far cry from the high-tech productions he imagines and molds into reality onstage today. In July 1976, the Sight & Sound Auditorium (later renamed the Living Waters Theatre) opened for the debut performance of “A Land of Our Own.” Live actors were eventually added to the productions, and “Behold the Lamb” debuted in 1987 as the first full-length live stage production at the original Sight & Sound Auditorium located in Pennsylvania. Eshelman says that first theatre required a $100,000 loan. “A huge commitment for Shirley and me,” he adds. “But my philosophy has always been, “This is what God called us to do and we do it.

“As a farmer, I believe in saving some of the seed,” he continues. “That’s what my dad taught me—save seed from each crop to plant the next year. We’ve always taken the seed from any production and re-invested it in another production or theatre. We plow everything back into the ministry.”

People often ask Eshelman if he has a ministry or a business. He replies: “We—my family and I—have a ministry that’s a business.” Sight & Sound Theatres is the largest faith-based ministry in live theatre in the country and has been described as “Christian Broadway.” While the family-owned business is a ministry, the company is not affiliated with any external organization or any particular church denomination. The business operates as a for-profit organization that accepts no charitable support.

Eshelman points out that the company has a huge investment in sets and costumes, which go into storage, waiting for the production to come up again following its initial run. “Shirley and I began to think. Could we be wiser stewards of our resources by starting another theatre in Branson?” he says. Not that they entered the Branson entertainment scene quickly. The couple pondered and prayed—and eventually believed they should take their productions to the Midwest.

The majestic domed Sight & Sound Theatre perched on a hill in Branson took three and a half years to build. Tons and tons of steel and concrete, miles and miles of wire and conduit, and sheet after sheet of drywall and foam insulation went into the project. Also over 500 doors. Rubber roofing.  Ceiling ductwork and plumbing, phone systems, plaster and paint on walls, carpeting, trees in the lobby, décor, and tiered seating for 2,085 people, plus 22 designated spaces for wheelchairs. All of this before 2008 and the opening of the Branson theatre’s first production, “Noah.” The 300-foot-long stage wraps around three full sides of the main-floor audience. Sight & Sound Theatre boasts one of the largest stages in America.

In a single year, nearly a million people from around the world experience a production at one the corporation’s two locations. Sight & Sound Theatre in Lancaster County of Pennsylvania is one of the top three theatre destinations in the country. Over 800,000 people watched the Bible story of Jonah and the Whale unfold on the stage of Sight & Sound Theatre in Strasburg, Pennsylvania, before the production moved to the Branson theatre in 2014.

“Jonah” is the epic adventure of a righteous prophet in Bible times 700 years before the birth of Christ. An uplifting, powerful show full of surprises, humor, and human nature follows Jonah’s journey in running away from the task God has set before him. Forty-one professional actors clad in colorful costumes and 30 live animals bring the story to life with fast-paced action and emotional tension. Incredible sets designed in minuscule detail move through the play from Jonah’s village to the harbor of Joppa and the 30,000-pound ship that he boards to flee God’s call. Special effects create an ocean of fog, allowing the ship crafted as a symbol of the giant whale, to glide on a still sea. The boat is the largest single piece in the history of Sight & Sound productions.

Jonah’s adventure takes him through a frightful storm, and what is best known about the prophet of old—three days in the belly of a whale after shipmates threw him overboard to quiet the raging wind and monstrous waves in an angry ocean. Before the audience’s eyes, Jonah floats to the bottom of the sea while new lighting for water and sky effects creates a sense that theater seats are suspended in deep waters with colorful, swimming fish. Guest Tempa Davis said: “Sight & Sound Theatre really brings a biblical story to life. I loved the whale that ‘swam’ over us!”

Original music enhances the story line adapted from the Book of Jonah in the Holy Bible. The score was recorded in Prague, the Czech Republic, and features the Prague Symphony Orchestra. All vocals are performed live onstage by the play’s characters.

After Jonah calls out to God from the belly of the whale, he is spewed out on dry land. He reluctantly, but obediently, makes his way to the lavish and wicked empire of Nineveh. He speaks his message from God to the people. However, Jonah struggles when the people repent and God reverses his decision to destroy them. The story continues with Jonah waiting on a nearby hillside for the destruction of Nineveh. A tree sprouts quickly to give him shade—but then withers when a worm cuts its base from the ground. Jonah sulks.

“Jonah” is a story of man’s pattern of thought. As individuals in the audience, we understand his righteous anger when the Ninevites did not receive punishment for their evil deeds. Yet, the overriding message of the production is God’s ultimate mercy and love, not only for Jonah, but for the people of Nineveh and the people of today.