You are here: Home / Blog / RV Travel Tales: Harlem Globetrotters—Catch a Game as You Travel
This post may contain affiliate links or mention our own products, please check out our disclosure policy here. 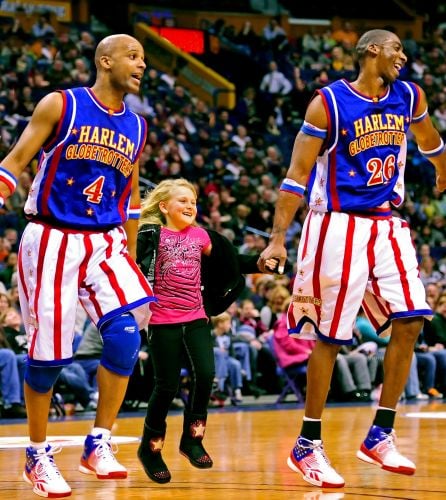 Basketball fans love the Harlem Globetrotters. Even folks who are not basketball enthusiasts love the Harlem Globetrotters. Recently, ownership of the traveling team went to Herschend Family Entertainment (HFE), known for their management of Silver Dollar City in Branson, Missouri, and Dollywood in Pigeon Forge, Tennessee. The Globetrotters is the 27th property in ten states owned by the largest family-owned themed attractions corporation in the United States. Basing their basketball skills on a combination of athleticism, theatrics, competition, and comedy, the Globetrotters have been an American institution for almost nine decades, endearing themselves to audiences around the world. Their smiling faces and friendly interaction with fans, especially children, fits well with Herschend Family Entertainment’s image of “…bringing families closer together and creating memories worth repeating.”

Going back to its beginnings in Chicago in 1926, the team’s official history is a bit murky. However, one fact is clear: the nucleus of the Globetrotters formed in the 1920s on the south side of Chicago where all the original players grew up. When the Savoy Ballroom opened in November 1927, the team known as the Savoy Big Five played exhibitions before the dances. However, Hinckley, Illinois, claims to have hosted the first Harlem Globetrotters game on January 7, 1927, despite the fact that the team did not have its official name at that time. The name came along later when Abe Saperstein toured Southern Illinois with a basketball team he called the New York Harlem Globe Trotters, separating the two words. Saperstein had decided to pick Harlem as the team’s home since Harlem was considered the center of African-American culture and all the team members claimed African-American heritage. At that time, an out-of-town—even more, an out-of-state—name gave the team a certain mystique. Yet four decades passed before the Globetrotters, by then one word, played their first “home” game in Harlem in 1968.

Over 88 seasons, team members have changed, owners have changed, and locations for games have changed. However, the team lived up to their name by literally trotting the globe. The Globetrotters were returning participants in the World Professional Basketball Tournament, winning it in 1940. Once considered one of the best teams in the country, the Globetrotters were surpassed by the rise of the National Basketball Association (NBA). The Globetrotters stepped back and gradually built their reputation for exhibition games on comical moves, fancy footwork, basketballs twirling on the tips of fingers, skillful dribbles and dodges, and basketballs sinking in hoops from 35-feet down the court.

In 1959, they ranged to Moscow, Russia, playing nine games in the Lenin Central Stadium against their own opponent, as they often did, the San Francisco Chinese Basketeers. On January 5, 1971, they lost to the New Jersey Reds and ended an alleged 2,495-game winning streak. Up to that date, the Globetrotters were playing 277 games per year. In addition to their hundreds of exhibition games, the Globetrotters slowly returned to competitive basketball after 1993. Between 1971 and 1995, they claimed an alleged run of 8,829 straight victories. The 8,829 games in twenty-four years means the Globetrotters were playing nearly 368 games per year or often more than one game a day. This is possible because multiple team lineups tour as the Globetrotters to allow for a greater number of exhibitions. In 1997, the team set aside their trademark tricks and showmanship for a three-week, no-nonsense tour against college teams from men’s Division One. During those games there were no twirling balls or hand-off displays to the tune of “Sweet Georgia Brown,” no buckets of water or confetti thrown on the court, and no teams such as the Washington Generals to act as their opponents. Although they lost close games to Vanderbilt University and the University of Maryland, the tour marked a decade of improvement as a competitive team. According to their records, on November 3, 2003, the Globetrotters’ parade of 288 consecutive victories screeched to a halt with a one-point loss to the Miners of the University of Texas at El Paso. It was their only loss during an eight-game college tour. The Globetrotters had defeated Michigan State, University of Massachusetts, and defending national champion Syracuse University. On February 27, 2006, the Globetrotters extended their overall record to exactly 22,000 wins.

Today’s teams include three female players. TNT Maddox and one line-up of players is pictured with Herschend Family Entertainment President & CEO Joel Manby (left, holding jersey) and Harlem Globetrotters CEO Kurt Schneider (right, holding jersey) following the announcement of HFE’s acquisition of the legendary team.TNT joined the elite Globetrotters in 2011, becoming the first woman to don the legendary red, white, and blue uniforms since 1993.  Her success opened the door for T-Time Brawner and Sweet J Ekworomadu to join the team over the following seasons.

The Globetrotters are like a family, another aspect that matches the philosophy of Herschend Family Entertainment. On the Globetrotters’ web site, TNT talks about the honor of becoming a part of the Globetrotters’ family. “This team incorporates everything I love about basketball,” she says. “…not only to play it, but to entertain and to give back to the community. I’ve always dreamed of leaving a positive mark in basketball history, and this is the perfect opportunity to do so.” Part of that positive mark came when TNT registered as an Adult Girl Scout, just another way she and her female teammates have found to inspire young girls to achieve great things.

TNT joined teammates Bucket Blakes and Special K Daley on a trip to Honduras as the Globetrotters partnered with World Vision, one of the world’s largest humanitarian organizations endeavoring to improve the lives of children around the world. During the “Fans Rule” tour, supporters will have the opportunity to learn more about World Vision, meet volunteers and staff, make donations, or even sponsor a child. As its official tour partner, World Vision will have a presence at all of the Harlem Globetrotters games during the “Fans Rule” tour. The Globetrotters play competitive basketball, but they also create fun wherever they toss a ball onto a court. Their “Fans Rule” Tour is simply that—a fun way for fans to interact by voting on a wacky rule to be added to their game. One such rule is “Hot Hand Jersey,” which involves a special jersey that members of both teams can pass around during one quarter. The player wearing that jersey receives double points on his or her score.

Another choice on which fans can vote is starting a quarter with two players from each team. As each team scores, an additional player may enter the court. However, on the down side, for every shot missed, the team loses a player. Or another possible rule throws two basketballs on the court at the same time. Only such wacky antics happen in a Harlem Globetrotters game. 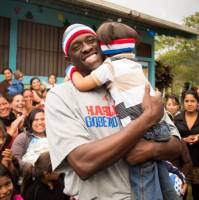 Now in progress, the Globetrotters are on the move with the “Fans Rule” Tour, playing 300 games in over 250 cities in 48 United States, six Canadian provinces and Puerto Rico through April 2014. With three teams on the road, their schedule often includes a game in San Antonio, Texas, on the same day as a game in Humacao, Puerto Rico. In February, the team plays in cities such as Prescott Valley, Arizona, Las Cruces, New Mexico, and Ithaca, New York. March takes the team to Duluth, Minnesota, Fairfax, Virginia, Rome, Georgia, and Toms River, New Jersey, to name only a few locations. (For a full detailed schedule, go here.

RVers, too, move around the country, perhaps, not keeping pace with the Globetrotters. Yet, catching a game in or near some city is in the realm of possibilities.