You are here: Home / Blog / RV Travel Tales: Harriman State Park’s History and Scenic Beauty
This post may contain affiliate links or mention our own products, please check out our disclosure policy here. 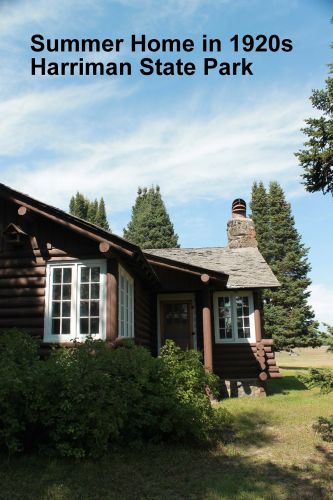 On a sunny autumn day, we visited Idaho’s Harriman State Park, close to Island Park on U.S. Highway 20. The Railroad Ranch—which makes up the 15,000-acre park—was once a summer retreat for shareholders and their families and friends associated with the Oregon Short Line, the railroad that first carried passengers from Ashton, Idaho, to West Yellowstone, Montana. In fact, West Yellowstone formed about 1907 when the train began depositing visitors at the west gate to Yellowstone National Park. Many of the old houses, cabins, and ranch buildings are standing and open for tours during the summer. All were closed on the afternoon we visited, but we felt the peace and serenity the summer visitors must have enjoyed back in the 1920s.

The Railroad Ranch had its beginning in 1902 with the formation of the Island Park Land and Cattle Company and spanned 75 years until its official transfer to public ownership. An impressive piece of ranchland, its natural history dates back over 600,000 years. The Ranch lies on the floor of the ancient Island Park caldera which formed when a massive volcano collapsed, leaving a wide crater-like surface. Over the years the Henry’s Fork of the Snake River carved its course across the caldera floor, creating a rich riparian habitat for a variety of fish and wildlife. Today from the lawns and sidewalks of historic cabins and buildings, we viewed horses grazing in deep grass. A wide sky with white fluffy clouds formed Harriman State Park’s roof.

For hundreds of years, Native Americans used the area as seasonal hunting, fishing, and gathering grounds. In the early 1800s, white explorers and trappers entered the region and exploited beaver and other fur-bearing animals. Homesteading started in the late 1800s, but few could withstand the harsh winters. Swiss homesteaders collectively sold their lands and ranch buildings to wealthy eastern investors. These properties eventually became Railroad Ranch, a landmark in Island Park for decades. Edward Harriman, Chairman of the Union Pacific Railroad, was not an original investor. In 1908, he purchased one of the five shares and one cabin in an arrangement with a business owner, Silas Eccles. Mr. Harriman died the following year, never having set foot on the ranch. Two years later, his wife, Mary, brought their three youngest children, Carol, Averell, and Roland, for a visit that turned into an annual summer holiday. The Harriman family and their friends spent weeks on the land each summer. However, Roland Harriman and his wife, Gladys, continued the tradition and spent at least six weeks at the peaceful ranch every summer. Friends who traveled with them were called “dudes,” and were housed in rustic houses overlooking the Henry’s Fork. Their horses and carriages were kept in “dude barn,” separate from the barns used for ranch operations.  The name carries over to lodgings today, available to the public. The Harrimans eventually bought all shares to the property.

A working ranch in the days of eastern visitors, summers were busy with fence mending, building repairs, tending of livestock, and hay and irrigation work. The fall cattle roundup and drive was an annual social event for the area, with volunteer riders coming a distance to participate. We read that the number of ranch hands diminished in the winter after summer guests had left. Their primary winter jobs were snow removal from the roofs, feeding the remaining stock, and cutting blocks of ice from Silver Lake to store for summer use. Winters in Island Park were—and are–severe with six to ten feet of snow accumulating and staying over a seven-month period.

Making a profit was not the major concern in managing the Railroad Ranch. Managers spent time preserving the prime wildlife habitat and well-built ranch cabins and barns. Consideration for wildlife was the primary reason for the Harriman family’s decision to donate the ranch to the State of Idaho. Roland Harriman set the transfer process in motion in 1955 and in 1961, Idaho’s governor signed the historic agreement which led to public ownership and responsibility for the Railroad Ranch and its natural resources. Originally, the transfer was to take place after all the Harriman shareholders (Roland, Gladys, and Averell) were deceased. However, as the three grew older, they decided to transfer the 15,000 acres of ranch property to the state before their deaths. On April 1, 1977, the Railroad Ranch became Harriman State Park of Idaho.

After taking photographs and soaking up the stillness of the historic neighborhood, we took a trail past the old barns and a grove of yellowing aspens through the woods to Silver Lake. The Harriman Wildlife Refuge, a part of the park, provides a safe haven for Idaho wildlife, including moose, elk, deer, and numerous species of birds. However, we only saw a squirming squirrel, some “clacking” bugs, and a flock of pelicans on the lake. Walking along the narrow trail, the wind in the aspens rustled like tissue paper. A stronger breeze came up—dark clouds banked—and the wind in the fir trees howled a lonesome tone.

Harriman State Park offers overnight accommodations for large and small groups in the restored historic buildings and in trailside yurts. Restrooms, picnic tables in a natural forest setting, and 20 miles of trails wind through both forest and meadows. The trails are available for mountain biking, horseback riding, hiking, and Nordic skiing. Guided horseback tours are available during the summer and fall months.