You are here: Home / Blog / RV Travel Tales: Historic Charleston’s Charm Overlays a Complicated Past
This post may contain affiliate links or mention our own products, please check out our disclosure policy here. 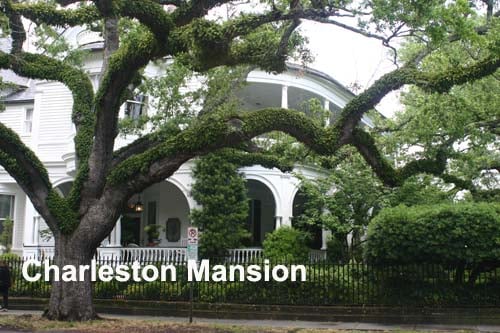 Charm covers Charleston, South Carolina, like a lace shawl wrapping a Southern belle’s shoulders. One has to peek through the fancy cutwork to see the complex history and complicated lives of those who founded and governed the historic city. Charleston began in 1670 as Charles Towne in honor of King Charles II of England. The city moved to its present location on Oyster Point in 1680 from an original location on the west bank of the Ashley River known as Albemarle Point. Charleston, the name the city fathers adopted in 1783, is defined by the waters of the Ashley and Cooper Rivers flowing around the city like a necklace into the salt marshes and on to the Atlantic Ocean.

Shipping and trading, reinforced by rice and indigo production on the low-country plantations, made Charleston one of the richest ports in the world. Despite the colony’s humble beginnings and natural disasters such as fires and hurricanes, as well as epidemics of smallpox and yellow fever, the city flourished with two and three-story mansions. Piazzas—long wide porches on the side of the house–caught breezes from the harbor. Glimpses through decorative wrought iron gates, even today, reveal lush gardens with an air of forbidden mystery. Charleston, now the oldest and second-largest city in southeastern South Carolina, turned from a colony into a sophisticated and cultured center of wealth and prestige. Scores of planters moved their families from plantations along the rivers to spend summers in town houses, escaping the prospects of disease from mosquitoes that hovered over the flooded rice fields. Most prosperous families ate their main meal at 2:00 p.m.; afterward, the mistress of the home received afternoon visitors. Parties, musicals, or balls staged under glowing candelabras started in the evenings around 9:00 and ended at midnight or later. Black folks served white folks. For most, it was an accepted way of life. Slave labor supported the lavish, opulent lifestyles within the walls of the city’s mansions.

On our first day in Charleston, we drove downtown from our RV Park on the city’s outskirts to the Visitor Center located in the old train depot built in 1860. Thunderstorms threatened, so we chose to tour the train depot and several old homes, scurrying between raindrops along the narrow streets. We discovered that everything requires money in Charleston, starting with the city-owned parking garages in the downtown area. We browsed artwork at the Visitor Center and purchased tickets for a city and plantation tour on the following day. We were about to leave the depot when a sales clerk asked if we would like to see the film about Charleston. Of course, we would! An introductory film to a city or park is always an excellent background for touring. The charge? Two dollars! The amount was not excessive; however, we had never been charged for a film in a Visitor Center. As I said, in Charleston, everything costs!

We wandered down a few streets lined with historic buildings and came to the Aiken-Rhett house at 48 Elizabeth Street. Built in 1817, the three-story Adamesque-style double house (meaning two rooms face the street, rather than the earlier single houses that narrowed to one room street side) remains exactly as it was after it had been abandoned. The Charleston Museum took over care of the property in 1975. Layers of history are evident on the walls and ceilings, some with missing chunks of plaster or hanging shreds of wallpaper. There are no plans to restore the property to its original magnificence. The Aiken-Rhett House has one of the few courtyards still intact within the city. We walked through servants’ quarters, stables, outhouses, and the kitchen, imagining the days when the large property buzzed with daily food preparation, laundry, and services provided to the owners.

Charleston boasts many unique restaurants. Still dodging raindrops, we found the Fish restaurant on King Street. Since the time had passed for a lunch crowd, we had the small restaurant to ourselves and great attention from a gracious waiter named Andy. He talked us through the different menu, which had choices for meats, veggies, and sauces combined in either a salad or a wrap sandwich.

Next, we toured the Nathaniel Russell House, built in 1808 for a wealthy merchant. Most of Charleston’s houses open directly to the sidewalk along narrow streets. But this Federal period mansion sits back off the street in its own garden. A side view of the red brick house shows off a tower of oval rooms. Bricks made by slave labor were common materials in the earliest buildings of Charleston. Later, stucco covered many brick homes to conceal damage by pelting hurricanes or even the 1886 earthquake.

Contrasting the Aiken-Rhett House, the Nathaniel Russell House is restored to its original grandeur. The free-flying staircase, built on the cantilever principle, is the focal point. Visitors are no longer permitted to ascend the staircase nor take photos inside the house. In the oval-designed dining room, the table is set for the family’s mid-day meal with Chinese porcelain in a “Sacred Butterfly” pattern. The sideboard is crafted by one of Charleston’s local cabinetmakers. Above the dining room, we entered a room where the family and friends gathered for evening entertainment with music from the harpsichord or the harp. Careful attention was paid to the elaborately carved window casings and the intricate ceiling molding that reflected candlelight. In all the rooms, floor to ceiling windows allowed sunlight and breezes to brighten the setting.

After retrieving our tow vehicle from the parking garage, we drove on some of the residential streets, admiring the mansions that typically were used only from May until the first frost when the threat of malaria and yellow fever subsided from their plantations. Majestic houses stand on a promenade curving around the Battery, a landmark defensive seawall that stretches along the lower shores of the Charleston Peninsula. The Ashley and Cooper Rivers meet at this point to form the Charleston Harbor.

Religious freedom attracted many diverse groups to Charleston. Huguenots settled the low-country plantations in large numbers. Episcopalians, Congregationalists, and Presbyterians held a presence in the city in the late 1600s. Jews, Lutherans, Methodists, Baptists, and Roman Catholics practiced their faiths under the steeples that rise toward the skies over Charleston, giving the city a reputation as the most tolerant of the colonies concerning freedom to worship. However, church pews were purchased, limiting attendance to the wealthy and prominent families.

Charleston was also considered the “cradle of slavery,” a contradiction that clashed and culminated in the nation’s Civil War. In a Charleston bookstore, I noted a volume of slave narratives. The book’s back cover blurb provided one of those peeks through the city’s charming lace shawl: “This certain slave sassed his master’s daughter. She said to him: ‘I will put you in my pocket!’ The slave’s child did not understand. Her father was a big, brawny man. How could the master’s daughter put him in her pocket? The slave told his child: ‘She’ll sell me and put the money in her pocket.’”

The city rose and fell, both from devastating fires and fierce storms. When “King Cotton” ruled, the money flowed freely, at least among the wealthy citizens. When the price of cotton plummeted in 1837, fortunes were lost among planters, merchants, and shippers alike. However, Charlestonians were resilient. By 1839, the city had a high school and a railroad to Columbia; by 1850, the city boasted a solid public school system (for white children exclusively, of course.)  Charleston rated only slightly behind Richmond and New Orleans in manufacturing. However, on December 20,1860, Charleston leaders unanimously passed the Ordinance of Secession from the

Union. Over the next four years, war bombarded their city, creating confusion, destitution, and devastation. When the Confederacy surrendered to the Union, Charlestonians were too poor to remodel their homes. Thus, the old houses and commercial buildings stood in their distinctive and original architectural state. Decades of poverty and peeling paint settled over the once-elaborate servant-filled mansions. Fancy balls and the groaning sideboards set out for guests no longer happened. Slow recovery began when a major naval base located in Charleston, creating industrial and commercial progress. In 1931, the city council adopted a proposal for a 144-acre Historic District. Over many years, mansions and slum neighborhoods alike were restored. The shops, inns, and boutiques present today are a result of Charleston residents who turned into preservationists. Thanks to them, millions of visitors fall under Charleston’s allure every year. Most see only the charm; others peek under the lace shawl to immerse themselves in the city’s complicated and contradictory past.