You are here: Home / Blog / RV Travel Tales: History in Cemeteries
This post may contain affiliate links or mention our own products, please check out our disclosure policy here. 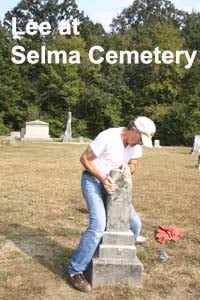 A couple of decades ago, my firstborn, Debbie, researched genealogy. On a warm spring afternoon, my sister who lived in a different town, visited. We tossed about ideas for entertainment. Debbie said, “You want to go to the cemetery and make ‘rubbings’ from the old monuments?”

With wide eyes and a tone she might have used if she had been asked to “moon” someone on Main Street, my sister replied: “No! I don’t want to go to the cemetery.”

Like many folks, she viewed cemeteries as places of sorrow and loss—maybe even a bit spooky. However, others, like Debbie and me, see history and stories of lives inscribed on the tombstones. In Magness Cemetery near the tiny community of Wilburn, Arkansas, where I will one day be laid to rest, I walk among markers of my ancestors and remember the stories. A row of small stones bear the names of my great grandmother’s grandsons who died in the same week as their parents in the influenza outbreak of 1918. Next to that son and his family a marker stands for another of Grandma Dora’s sons—an 18-year-old who was to have been drafted for WWI the day following his death, also from influenza.

A few years ago, Lee and I traveled to South Arkansas to visit the cemetery where his grandfather and several of his children are buried. I only know this family from a group photograph. Some of the markers had been vandalized. Lee and I scrubbed the pieces and he carefully used a mortar to put the monuments back together as best he could. Beside his grandfather’s grave, we found markers for Nannie, age three; Mable, age five, and Thomie A., age two and a half months. Looking at those stones, we wondered how and why those young children died. I tried to match names to children I saw in the sepia-toned family photograph.

When we had Workamping jobs in Bar Harbor, Maine, I walked down a street and discovered a “burying ground” with tombstones that dated back to the 1780s. The graveyard, defined by a tour guide in Charleston, South Carolina, as a burial site next to a church, adjoined a Congregational Church. The South Carolina guide said that a cemetery is not connected with any particular church. But it seems in the New England states, they are called “burying grounds.” While on this job in Maine, we stayed at Smuggler’s Den Campground at Southwest Harbor on Mount Desert Island. As I walked with Spot, I discovered a small family cemetery with markers dating back into the 1800s. Just beyond the family plot, I saw evidence of an old home place and an apple orchard.

That same autumn, we spent some time in Boston and discovered Copp’s Hill Burying Ground. The markers in that cemetery have at least three types of common engravings: skulls and crossed bones, winged death’s heads, and hourglasses engraved at the top. A few had a cherub’s face, and others had an urn and a willow branch—or even a galloping skeleton. Some of the more elaborate stones have intricate carvings and rhyming poetry. One source states that the morbid imagery on the headstones in Boston’s oldest cemeteries was designed to remind those left behind of the fleeting nature of life, perhaps even to scare them into changing their sinful ways, according to the Puritans’ strict interpretation of Christianity.

Actually, the stones in Copp’s Hill Burying Ground do not necessarily mark graves. Many have been moved to make way for walkways and no one really knows where particular people are buried. And like the headstones in Bar Harbor, they were inscribed with the age of the deceased, often down to the months and days. Very few had a birth and death date, which is customary in the Arkansas Ozarks.

Most recently, we visited the Shiloh National Cemetery located on a bluff above the Tennessee River at Shiloh National Military Park. The cemetery, marked with rows and rows of white crosses or small and simple stone markers, holds the remains of Union soldiers killed in the fierce battle at Shiloh. The Confederate dead were buried in at least five mass graves located on the park’s premises. Ancient oaks shade the national cemetery. Paved walkways wind through the sections designated by letters of the alphabet. The terrain gently rises and falls to the edge of the bluff. On the day that we visited, an aura of peace hovered on the springtime breeze that softly ruffled the green leaves of the wooded area surrounding the cemetery.

Indeed, cemeteries—graveyards or burying grounds, whatever they are called—can be places for reflection and meditation; places to contemplate past generations and what their lives were like during a particular era. Yes, headstones in cemeteries hold volumes of history for those eager to look.