You are here: Home / Blog / RV Travel Tales: How Do They Decorate a City?
This post may contain affiliate links or mention our own products, please check out our disclosure policy here. 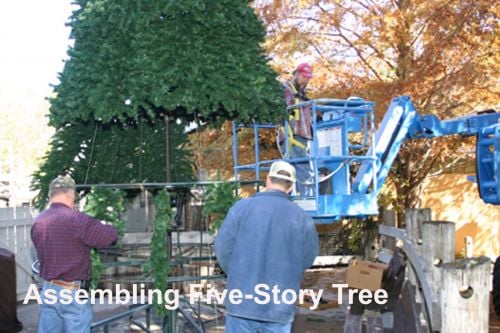 Before the last Jack-O-Lantern is snuffed on Halloween, crews at Silver Dollar City, an 1890’s reproduction theme park near Branson, Missouri, are stringing lights, hanging wreaths, and draping garlands on every door and building. The park draws visitors from around the world, but particularly from the Midwest. Its festival to celebrate all things autumn ends the last week in October and closes for a week to transform the old-fashioned storefronts and tall Ozark trees into a Christmas fantasyland. How do they switch so quickly and totally from orange pumpkins and scarecrows to red poinsettias and decorated Christmas trees?

The visual supervisor says the emphasis for her decorating team is all about creating memories for families who make a visit to Silver Dollar City a Christmas tradition. They strive to call up memories of Christmases long ago when visitors walk into Silver Dollar City the first weekend in November. Dazzling lights, wreaths with red festive bows, and smells of hot chocolate and evergreen envelop the park. But behind the scenes, the visual team at the City began as early as January to plan and order supplies for their vision of An Old Time Christmas. Each Christmas season has a different theme. As soon as the general theme is in place, the staff seeks components

and materials in the wholesale gift market to bring that concept to life. They order yards and yards of ribbon, mounds of greenery, ropes of tinsel, candy canes, fresh Christmas trees, snowflakes, angels, cotton batting for snowmen, Santa’s in all shapes and sizes, and various scenes and ornaments. Delivery, especially on the greenery and ribbon, is made in early summer so workers can begin assembly of wreaths and garlands. Five people on staff typically work seven full workdays to weave 5500 yards of colored ribbon into 300 green wreaths and dozens of garlands. For dimension they weave the ribbon deep into the greenery. Each one has a slightly individual effect. According to the particular theme, burnished foliage, angels, or even Santa’s—complete the wreaths. Other items that only require assembly, such as various nativities, sleighs, reindeer, gingerbread houses, and snow scenes, are delivered later.

Although the team started working on Christmas in July, they switched gears in mid-summer to decorate for Silver Dollar City’s fall festival. As early as September amid autumn leaves, pumpkins, scarecrows, and craft exhibits, the sound of clicking staple guns echoed throughout the City. Unnoticed workers started on the lower streets, tracing rooflines and entire walls with strings of tiny white and red lights. After regular park hours, men in buckets rising on mobile ladders circled colored lights on selected trees, wrapping brilliant golds, blues, reds, and greens to the tips of limbs.

“When the lighting crew wraps a tree, it takes 80 strings of lights and two people a total of 16 hours,” a spokesperson for the visual team says. “Generally, we wrap at least 10 trees. All total, about 15 people work for three months to light the City.”

In addition to twinkling lights on every natural tree and bush in the park, five hundred blue spruce trees arrive on a flatbed trailer from Michigan to enhance the fading colors of an Ozarks’ autumn. For six days between the Festival of American Music and Craftsmanship and An Old Time Christmas, a crew of approximately 200 people from all Silver Dollar City departments come in to “dress the City.” One team removes all the fall decorations and another team hangs garlands. Another intertwines lights into the fresh spruce trees placed along walkways. Yet another team decorates dozens of trees with different themes set up in the Frisco Barn.

A special crew works two days to assemble the five-story special effects Christmas tree. Adorned with over 250,000 lights synchronized to the musical movements of Christmas songs, the huge tree towers over the City’s Gazebo Square. In The Grand Exposition, an area with family rides, the Wave Carousel, sheathed in white lights, stands above treetops four stories tall.

The visual team also works with the merchandising team to decorate the shops. The pencil-straight line of lights outlining rooftops and the golden glow of store windows merely hint at the items available on packed shelves and counters. A spokesperson says, “People want what they see. For example, if we’re decorating with Santa’s in the park, we make sure there are Santa’s to buy in the shops. One year, ornaments or wreaths with purple, gold, and red ribbon, nativities, and angels followed our theme.

“Guests love the Santa’s, but some years they are sleeping. Snowmen are also popular,” she continues. “Some of the staff made the life-sized whimsical snowmen from rolls of batting and created their old-fashioned clothing. We try to put them in a different area of the park every year so people can discover them.”

Once the garlands are hung, the wreaths and poinsettias fluffed, and the nativities, snowmen, and angels are in place, Silver Dollar City’s visual staff draws a deep breath. Yet, their work continues. Everyday, someone checks to see if a light needs to be replaced or a Santa straightened. “The person who comes in December deserves the same fresh look in décor as the guests who arrived on opening day in early November,” the visual coordinator says. “At least, three times a week, someone on my staff goes out to make sure nothing is faded or has fallen down—and that everything still looks good.”

Decorating a city for Christmas is a giant-sized job, but a job that the workers at Silver Dollar City love. “It’s always about standing at the grape arbor outside the welcome center on opening night. Folks coming in have no idea who I am—and that I had anything to do with Christmas,” the coordinator says with her contagious enthusiasm. “Then I hear those ‘ahh…’ remarks. There is nothing more satisfying.  For me and my staff, it’s kind of like painting your room at home.  When you get it almost done, you’re thinking, ‘…this is good!’”