You are here: Home / Blog / RV Travel Tales: Jump-Start Spring in Branson, Missouri
This post may contain affiliate links or mention our own products, please check out our disclosure policy here. 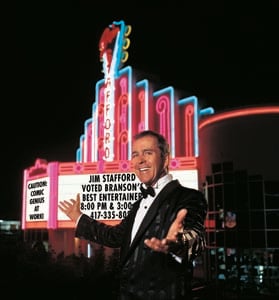 In the springtime months, many RVers converge on this small Midwestern town, known as the “live music show capital of the world.” Some snowbirds or winter Texans time their travel to coincide with a trek home from warmer climates to cooler zones in the northern states. Others simply look forward to “breaking out” after a long, cold winter. Branson’s 6th Annual Springtastic Show Spree is the perfect week for show lovers to visit and get an introduction to some of the top shows of the town. During this one week—April 15-April 21—visitors have the opportunity to sample a variety of ten different shows for $125, sponsored by The League of Branson Theatre Owners and Show Producers (The Branson Show League).

“Shows, shows, and more shows, for just a fraction of their normal cost.” says popular ventriloquist Jim Barber of the Hamner Barber Variety Show and Theater. Springtastic Show Spree passes are for sale only on-line at the official website of the Branson Show League, ShowsInBranson.com, and are limited on a first-come, first served basis during the week of April 8, 2013. Jim Stafford, famous comedian and nationally known recording star, believes this is “…hands down the greatest show ticket value you will see all year in Branson.”

Much to the approval of the estimated eight-plus million visitors who travel each year to this Ozarks Mountain town of approximately 10,000 residents, Branson’s stars can be spotted each morning, afternoon and evening in almost every type of live theatrical performance. Built upon firm foundations of country music and knee slapping comedy, Branson’s theater community also offers a variety of shows featuring pop, gospel, blues, rock ‘n’ roll, western, acrobats, magic, Cajun, swing, big band, Motown, Broadway, and musical plays. “The ten shows visitors can see during the Springtastic Show Spree amount to less than 10% of the possible live shows currently playing in Branson,” says Jason Hughes from the Hughes Brothers Theatre. “This special preview week will whet your appetite to come back again and again to enjoy the variety of all of the shows the town has to offer.” Dawn Easton owner of God and Country Theatre adds, “If you see your first ten shows during the Springtastic Show Spree, you’ll have to come back more than ten times just to see all the shows in Branson one time.”

The limited amount of Springtastic Show passes are available only through April 8 or when the passes sell out, whichever comes first. “If you are a live show fan, a music lover of any sort, the Springtastic Show Spree is the ticket for you.” says Buck Trent, 2-time Country Music Awards (CMA) Instrumentalist of the Year and star of his own country music show.

“Ayo” starring Voices of Glory, a show kicking off its first season in Branson at the Hughes Brothers Theatre, is one choice on the list. The new show stars siblings, Michael, Avery, and Nadia Cole, who together are known as “Voices of Glory.” The trio’s unique style of harmonies, their pitch perfect sound, and their shining personalities have led to amazing successes from landing in the top five of “America’s Got Talent” in 2009 to touring internationally, performing at the Annual Gospel Music Association’s (GMA) Dove Awards, the 2010 and 2011 Inspirational Country Music Awards (ICM), and being a featured act in Andy William’s 2012 Christmas Show in Branson. Their most recent international appearance took them to Germany for Weihnachtszauber.

Kirby Van Burch, often billed as “The Prince of Magic,” is another choice on the list. Through the years, Kirby has developed a following, especially among families who love to see both his small and grand illusions and his exotic animals, including Royal White tigers. Kirby’s show also includes mind-reading, assistants cut in half, and a girl in a cage changing into a tiger. He seamlessly moves from small illusions such as tearing a newspaper into tiny bits—and then in an instant restoring the full-page print—to a huge helicopter appearing onstage. Also starring in the Kirby VanBurch Show is Bambi VanBurch, the Princess of Magic, and the most awarded female magician of the decade.

Magic and ventriloquism mix at the Hamner-Barber Show. The husband-wife team, the Hamners, magically introduce their signature performance with dozens of macaws, cockatoos, and doves soaring above the heads of the audience. In addition to exotic birds, the Hamners’ act features flying cards, flaming swords, and falling coins and jewels. Sharing the stage with Jim Barber, once awarded “Ventriloquist of the Year” for his unique style of combining magic and ventriloquism into one act, the show is original with wholesome comedy. The finale is a heartwarming performance set as a tribute to American Veterans.

Jim Stafford, a master of the classical guitar and one of the world’s greatest entertainers, is also a choice on the Springtastic Show Spree list. In 2013, Jim begins his 24th season in Branson Missouri at the Jim Stafford Theatre. His talented teen-age children, Shea and G.G., perform alongside their dad with piano, fiddle, and pedal harp. Added to the wide range of music is Jim Stafford’s low-key, but outrageous, comedy.

Springtime in the Ozarks—dogwoods blooming on the hillsides, tulips in flower boxes, and soft greens of budding leaves on the trees—is a backdrop to the incredible show offerings during Springtastic Show Spree. Whether RVers are frequent visitors to Branson or first-time travelers to the music city, a ticket to sample the line-up of shows is a fantastic opportunity for entertainment.