You are here: Home / Blog / RV Travel Tales: Just Horsing Around
This post may contain affiliate links or mention our own products, please check out our disclosure policy here. 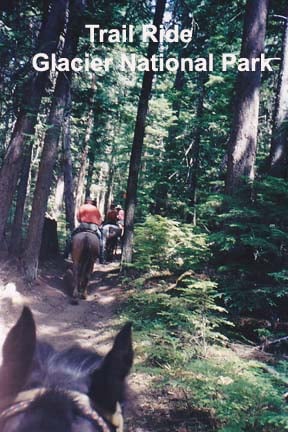 Every kid alive wants a horse. However, I don’t remember asking for one—nor in my wildest dreams ever thinking I’d have one. Yet one Sunday after church, my dad surprised me with a sorrel gelding named Ginger. I was eleven. I didn’t have a saddle and probably had only ridden the little ponies that walked in a circle in the traveling carnival that annually visited our town. Still, Dad had me change from Sunday clothes into jeans. He lifted me onto this horse’s back and placed reins in my hands. I had no idea how to direct or guide the animal. He aimlessly ambled around our neighborhood and over the nearby school play ground. Somehow, I managed to get him two blocks back to our home—and to slide off his back.

The horse turned out to be—as we say in the Ozarks—mean as a snake. It’s a small wonder that I was not bucked off on that first Sunday ride. My Dad, also inexperienced as a horseman, rode him and almost was bucked off on the Main Street of our town. By summertime, he was looking for me a gentler horse. Dad found a huge old pinto, slow as molasses in winter, and one I almost needed a step stool to climb on. I kept him a week and took to horses and riding like a duck does to water. I could catch this big old horse and ride him without supervision. (By that time, Dad has bought me a saddle!) However, one day for no apparent reason, the former owner came and picked up the horse I had named Duke. I cried and cried over my loss. The search continued for another horse. The next one, a small sorrel mare, bucked me all over our front yard as my mother stood on the front porch screaming: “Get off!” Next a local horseman brought me a buckskin mare named Punkin, who was about ready to foal. He told us she had been raised wild and had been broken as a three-year-old. Nevertheless, she was worn down with a foal, and I could ride her. I fell in love with Punkin, spending most of my summer days riding her, brushing her, and telling her my secrets. The morning Dad came to wake me and announce that Punkin had foaled was one of the most exciting days of my childhood. I named that little buckskin colt Bubbles. Once the weather cooled and Punkin fattened up, she, like the sorrel Ginger, showed her wild streak. She bucked me off once—and always eluded me when I tried to catch her. However, Bubbles was a gentle as a July rain.

Strange how a particular happening can change the direction of one’s life. I joined a local riding club and met my first husband. We attended the same high school, but probably would never have noticed one another without our common interest in horseback riding. Much to my mother’s chagrin, we participated in horse shows with my matched pair of buckskins. I even tried some barrel racing. Of course, if Dad had known I was going to fall in love as a teenaged cowboy, he probably would never have bought the first horse!

I rode horses until I married at age 17 and we went away to college. After that, we were too busy with babies—and too short on money—to feed a horse. Actually, after I became a mother, I lost some of my confidence for riding. Yet my love of horses remained.

While in Glacier National Park, Lee and I booked a three-hour horseback ride to Paradise Valley. I knew it would be a nose-to-tail ride, but we both imagined riding through flower-strewn meadows and gazing at snow-capped mountains from atop our mounts. When we arrived at the stable, we were given matching black horses, a bit stocky like draft horses, but not as tall. There were only five people, not including the wrangler, on the ride. We mounted up—me on King and Lee on Licorice—and headed into a forest of tall cedars and firs. I was slightly disappointed because I could find trail rides through forests in Arkansas and Missouri. But soon my disappointment turned a different direction. I realized the stable had given Lee and me their two duds! My horse stumbled along the rocky path bordering a gurgling stream and Lee’s poked along far behind the wrangler and other riders. My horse tossed his head, shaking off horse flies. A couple of times Lee’s mount spoofed, which made me nervous because he had limited experience in riding. The wrangler kept calling out to Lee: “Make him trot to keep up!” Behind me, I heard Lee calmly coaxing: “Good boy. We’re going to do this. You’re doing good!” But the old horse still lagged. I watched the Appaloosas in front of me, carrying a man and his two daughters, and they never stumbled once.

We followed McDonald Creek and passed Sacred Dancing Cascades, which were quite beautiful. The path was narrow and rutted. I did not feel that King was sure-footed. Although the wrangler had added shorter stirrups to my saddle, my legs were rubbed raw on the straps. And the horse’s gait was quite rough.

Despite the disenchantment about riding in a forest instead of a valley, the beauty of a red cedar glade almost made the stumbling horse worth the trip. The shadow of the mountain fell across the creek that we followed. The thickness of the tree branches created a sense of twilight. Strands of sunshine like spun yellow gold filtered through the lacey boughs in intricate designs. On the forest floor brown tree carcasses strewn like matchsticks lay in a carpet of green moss and leafy ground cover. Our wrangler said that particular area is Glacier’s rain forest. He noted that due to a rock bed, the trees only put roots down about 15 inches. Therefore, winter winds uproot the trees, sending them thundering to the ground where they nurture new sprouts on their fallen trunks.

The path we rode, a route for Blackfeet hunting and warring parties, is the oldest trail in the park. While it continues for 40 miles, I was thankful that we did not cover its length. At one time—in a younger lifetime—I would not have wanted to miss even a foot of the trail. Hopefully, my time in a saddle is not over. Gone are the days I could ride from sunrise to sunset—and then dance in the evening. Still, horses changed my life. Just horsing around remains in my heart.