You are here: Home / Blog / RV Travel Tales: KaPau—The Next Big Thing!
This post may contain affiliate links or mention our own products, please check out our disclosure policy here. 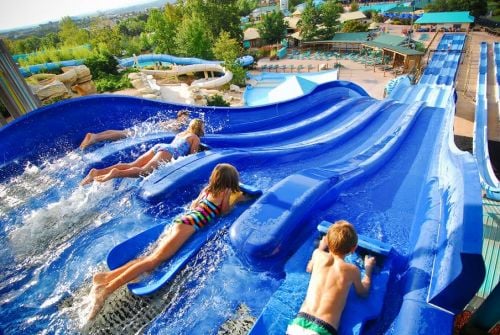 RVers are familiar with “…the next big thing.” We experience it all the time. But many of us may not know that KaPau (pronounced Ka-Pow) is a U.S. surfer slang term meaning the next big wave or the next big thing. At White Water Park in Branson, Missouri, the $1.7 million KaPau Plummet that opened in May 2014 means an all-new drop-floor slide with a near-vertical plunge through two 240-foot dueling slides, followed by a spiraling loop. A ride not for the faint of heart—like me. But for those like my husband, Lee Smith, who slow their pounding hearts enough to climb atop a four-story tower and into one of two encapsulated slides—described as launch capsules—they will hear the countdown:  3…2…1 KAPAU! The bottom of each slide drops out, creating a rider free fall at 70 degrees, speeding at 26 feet per second into a looping 240-foot translucent waterslide before a final splashdown. Spectators (that’s me!) watch the riders’ rocket-like plunge and see them spiral through the loops.

Back in April before White Water opened, Lee and I were invited to a media event that featured the placement of one of the two capsules. Although no water flowed that chilly spring day, we climbed the observation tower and watched workmen carefully pull the capsule held by cables into its permanent spot on the four-story tower.

KaPau Plummet is the centerpiece for White Water and exceeds the thrill factor of any water ride ever built at the 13-acre tropically-themed water park. Cory Roebuck, White Water Director of Operations, explains: “The AquaLaunch trap door builds anticipation for an incredible drop, and then the plunge will literally take your breath away.”

So maybe you’re not into losing your breath? Perhaps, you seek a fun place to take grandkids for a day. White Water Park is cool, wet, and wild. And there’s more at the park than a plummeting KaPau—over a dozen rides,slides, and attractions and two million gallons of cool water fun ranging from riveting to relaxing. Thrill rides include the seven-story, six-slide Kalani Towersand raft slides such asRaging River Rapidsand Ohana Falls. For a more relaxing adventure, Aloha River is an 800-foot themed river, where tube riders float the twists and turns under fountains, spraying mists, and geysers. (That’s where you’ll find me!) Splashaway Cay is an interactive family attraction with slides and geysers, and Coconut Cove is a play area specially designed for smaller kids. There’s something for every age—and every age in grandchildren.

The popular Night Water event is bigger than ever, adding more “Dive-In” movies on Friday nights in July and August, featuring films from animated hits such as “Frozen” and “The Little Mermaid” to classic family favorites including “ET” and “Back to the Future.” Movies are shown on a 10-foot screen above the 500,000-gallon Surf’s Up Wave Pool. Guests watch and float on the cool water. Also new this year for Night Water, “Red, White & Boom!” fireworks fill the skyabove the wave pool at park closingon Saturday nights. During the Night Water schedule, guests can play all day and into the night under a sky of sparkling stars. White Water is open May 17-September 7.