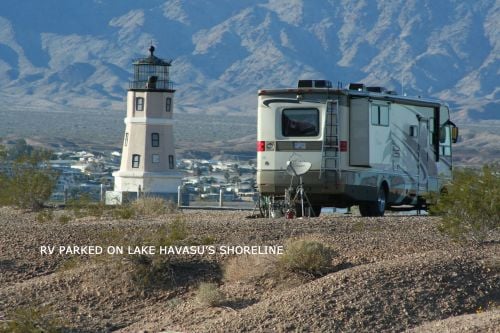 A banner flapping in a desert breeze outside a church in Lake Havasu City, Arizona states: Welcome Back, Snowsheep. Approximately 750,000 visitors spend time in the young city, but not all of them are “snowsheep,” who choose to winter there in the mild temperatures, sunshine, and arid desert landscape. Many sunbathe on Lake Havasu’s shores in other months, dipping into the lake’s cool, blue water to beat summer’s searing heat. The lake’s temperature ranges from 75 to 85 degrees during most of the year and offers 60 miles of navigable waterways to roam.

But hundreds—likely thousands like Lee and me—prefer the slow-paced winter for an escapee from snow and frigid temperatures in other parts of our country. Located within easy access and short driving distances of I-40 to the north and I-10 to the south, Lake Havasu City draws snowsheep much the same as South Texas lures snowbirds. The winter nomads arrive with their motorhomes, trailers, and four-wheelers that rip over desert dunes. Lake Havasu City offers plenty to do year-round—or the option to kick back, hang out in an RV park, and do nothing if one desires.

As towns go, Lake Havasu City, Arizona, is a toddler. Founded in 1963 and incorporated in 1978 by Robert P. McCulloch, the town sprouted as a self-planned community lot by lot on the shores of Lake Havasu. McCullough came to this area of Arizona desert to test his latest endeavor: an outboard motor. The 45-mile stretch of clear water impounded by Parker Dam across the Colorado River seemed like the middle of nowhere. And it was. However, McCulloch saw the possibility of a town and in 1958; he purchased 3,353 acres in Mohave County.  After four years of planning, McCulloch Properties acquired another 13,000 acres of federal land in the surrounding area. He hired C.V. Wood, who designed Disneyland and Six Flags over Texas, to lay out Lake Havasu’s unique road system. The city boasts two movie theaters—places we frequent—a large shopping mall, down town shops, numerous restaurants, city parks, and annual events and festivals.

London Bridge, purchased from the City of London by Lake Havasu’s founder, Robert McCulloch, spans Bridgewater Channel as the Lake Havasu’s crowning attraction. The dismantled bridge was shipped to Arizona’s desert where it was reconstructed and rededicated on October 10, 1971. Visitors enjoy strolling across the bridge and browsing the shops along the waterfront in an area themed as an English Village.

When arctic air, snow, and ice blast our home in Arkansas, Lee, Spot, and I like being snowsheep for a few weeks in Lake Havasu City. Desert dust clings to our shoes, and often, we wear a light jacket. Yet, most days we go about a daily routine under a bright blue roof, perhaps, streaked with a few white clouds. Sunshine, movies, strolls, and an occasional boat ride fill our days!