You are here: Home / Blog / RV Travel Tales: Little Rock’s Central High School Once Stood on the Nation’s Stage
This post may contain affiliate links or mention our own products, please check out our disclosure policy here. 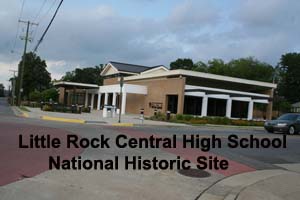 Little Rock, Arkansas, offers numerous interesting museums, historic sites, and pedestrian bridges across the Arkansas River to entice RVers traveling through the state to stop for a few hours—or a few days. Although in September 1957, an ugly stain spilled across the pages of Arkansas’ history as nine black students attempted to enter Central High School, the school is now a National Historic Site committed to preserving and interpreting the story of the desegregation crisis. The site’s Visitor Center documents and commemorates the events of one of the darkest days in American racial relations, but also interprets the school’s significant role in the integration of public schools and the development of the Civil Rights movement in the United States.

In visual and audio exhibits, stories of the Little Rock Nine, as those students came to be known, and the handful of white students who befriended them, complement information about other groups—women, American Indians, Japanese Americans, Hispanics, immigrants—who have stood up for their rights in our country. The Visitor Center at the school provides one of the most vivid documentations of the hostile crowd shouting jeers and waving fists, when the nine black students were turned back by national guardsmen, called out by then Governor Orval Faubus. The governor justified his orders: “…to maintain or restore the peace.” The nation waited to see what would happen.

Governor Faubus claimed the soldiers would not act “as segregationists or integrationists.” Yet, on his orders they turned back the students. After the tumultuous first attempt of the black students to enter Central High School, they left the scene; some like Melba Pattillo and her mother barely escaping an angry throng throwing rocks at their car. A white woman sat on a bench at the bus stop with Elizabeth Eckford until she could safely board public transportation to her home. Several of the students gathered two blocks away and walked as a group to their safety. The Little Rock Nine did not return to Central High for three weeks. They studied together, trying to keep up with classroom work they were missing.

In the meantime, Governor Faubus battled with the federal government and the National Guard remained at Central High. On September 20, the question of the governor using the Arkansas National Guard to defy a federal court order was argued before Judge Ronald Davies, a no-nonsense judge from South Dakota. Judge Davies ruled that Governor Faubus had interfered with the court-approved integration plan. The governor’s lawyers walked out of the courtroom, a visible protest against statement that the judge’s ruling. The governor ordered the National Guard to leave Central High, and Little Rock Mayor Woodrow Mann promised that the city police would keep the peace when the black students returned to the school. The eyes of America watched.

On September 23, the nine teenagers once again approached the school’s entrance; this time as a group flanked by some of their parents. A violent mob gathered, attacking black reporters and smashing their cameras. Amid threats of hangings and shouts of racial slurs, the students were whisked in a side door. Inside, they confronted taunts, threats, and ugly name calling. Some even spit in their faces. A few white students extended friendship.

After determining they could no longer contain the rioting outside the school, police took the black students from classrooms, led them to a basement garage, and into police cars that sped them to their homes. The youngsters stayed out of school on September 24, yet maintained their commitment to attend the high school.

On television, President Dwight Eisenhower addressed the nation stating: “Mob rule cannot he allowed to override the decisions of our courts.” He ordered the 101st Airborne to deploy to Little Rock’s Central High School. The President also federalized the Arkansas National Guard. September 25, 1957, is considered the official date of integration at the Little Rock High School. Escorted by the unit known as “The Screaming Eagles,” nine brave teenagers entered the doors of Central High hearing the chants: “Two, four, six, eight. We ain’t gonna integrate.” Silently inside their heads, the black students repeated their own lines: “Eight, nine, ten. The guards will take us in.”

And they did, although the school year challenged the black students. The following year, the high school closed, offering a disruption in graduation for many Little Rock students, black and white.

Little Rock Central High School reopened the following year and is currently a four-year public high school with 2,400 students, approximately 54% black and 43% white. On November 6, 1998, the school became a National Historic Site. For their contribution to the Civil Rights Movement, in 1999, each of the Little Rock Nine received the nation’s highest civilian honor, the Congressional Gold Medal. Each member of the Little Rock Nine went on to earn advanced degrees. They now live throughout the United States and the Netherlands.

The Visitor Center is open daily from 9:00 a.m. to 4:30 p.m., year round. The park is closed on Thanksgiving, Christmas, and New Year’s Day. For more information about visiting the Central High School National Historic Site go to:  http://www.nps.gov/chsc/index.htm