You are here: Home / Blog / RV Travel Tales: Magnolia Plantation
This post may contain affiliate links or mention our own products, please check out our disclosure policy here. 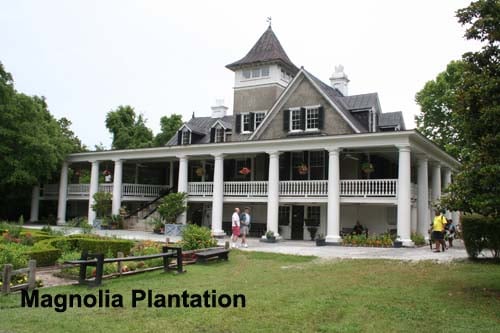 Magnolia Plantation near Charleston, South Carolina, was once known for its extensive earthworks of dams and dikes built in fields along the Ashley River for irrigating crops of rice—South Carolina Gold, as it was often called in the Colonial Period.  Open daily to visitors, Magnolia Plantation today is a house museum with a petting zoo and tours through gardens and marshlands. Dating back to 1676 when Thomas and Ann Drayton built a house and a small formal garden on the site, Magnolia Plantation is one of the oldest in the South and is listed on the National Register of Historic Places.

Like most places I visit, the stories intrigue me. The Drayton’s story is long and complex. The generation living on the plantation in the years prior to the Civil War had two sons—Thomas and John. All his life the older brother, Thomas, was groomed to take over the management of the plantation. The family owned numerous cotton and rice fields, a summer home 14 miles up the Ashley River, and a downtown mansion in Charleston. John understood that as the second son, he would never be a master of the plantation, or even have a large inheritance. He felt called to be a Christian minister, so he went away to seminary and met and married his wife, Julia.

One day while studying in England, John received a message that his older brother had been injured in a hunting accident and had bled to death on the steps of their plantation home. His mother left the house, never to return. In this unexpected turn of events, John Drayton had to take over all of the family’s holdings. Suddenly at age 22, he had the responsibilities of a wealthy planter. Despite the fact that his Philadelphia-born wife did not like bugs, snakes, or anything about life along the Ashley River, he returned to his home on the Magnolia Plantation.

In hopes that his Julia would not be homesick, John Drayton set to work on expanding the gardens of the Magnolia on the Ashley. Working alongside his slaves, he took the gardens into a more informal style, focusing on the natural beauty of the plantation, the river, and its marshes. More than anyone else, John Drayton is credited with the internationally acclaimed informal beauty of the gardens today. He introduced the first azaleas to America, and he was among the first to use camellia japonica in an outdoor setting. In the antebellum period, the Magnolia Plantation became well known for their azaleas and live oak trees, rather than the abundant Southern Magnolia for which the plantation had been named.

John Drayton determined to continue his studies, but with the heavy work load of managing a plantation and the family’s wealth, he became run-down and contracted tuberculosis. Doctors told him that working in the soil would help to restore his health—and the outdoor work agreed with him. Following his calling, he also entered the ministry as rector of nearby Saint Andrews Church, which had served plantation owners since 1706 and still stands two miles down the highway towards Charleston. Before the Civil War, John Drayton devoted the bulk of his ministerial work to the enslaved African-American community. After the war, his focus remained on the newly freed African-Americans. He called his family’s slaves his “black roses.”

When Charleston was evacuated in anticipation of Sherman’s March through the city at the end of the Civil War, John Drayton fled with his family to another home in Flat Rock, North Carolina. Sherman did not burn Charleston, but Union troops torched every plantation in the low country, except for Drayton Hall, the home of John’s great-great grandfather. The two-story mansion stands up the road from the Magnolia plantation home, which did not survive the fires. John’s slave-overseer, Adam Bennett, walked 250 miles to North Carolina with the message that the house lay in charred rubble. John returned to South Carolina and with the help of his slaves, dismantled and floated the summer home on the Ashley to Magnolia Plantation and added it onto a portion of the house that survived the blazes. The house they hastily built is the tour home today. Eleven generations of Draytons have kept the home, the gardens, and the old plantation ponds and marshes in their family for more than 325 years. Adam Bennett’s family continued to live on the plantation after emancipation.

After the Civil War, the South’s economy lay in ruins. The original plantation covered 2,000 acres. John Drayton sold off 1,500 acres to a phosphate mining company and in 1870, he opened the gardens for tours to bring income to the family. He saved the plantation from ruin. Today, the gardens that John Drayton created to God’s glory remain the focal point of tours. An open-air shuttle, called the nature train, takes guests along the river road, through the wooded areas, and around the marshes and ponds. A guide helped us spot alligators sunning their leathery bodies on tilted ramps in the water. In the Audubon Swamp Garden thousands of plants and wild creatures exist in the black water surrounding the cypress and tupelo gum trees.

Guests also have the option to explore on foot, walking on boardwalks, over seven bridges, and along dikes. Each year, hundreds of egrets, herons, and other waterfowl nest within feet of the walking path. The front of the old house faces the Ashley River. In the plantation’s heyday, everyone arrived via the river. Parties typically lasted till dawn when the invited guests climbed aboard a boat to return them to Charleston.

From a wide front porch that wraps three sides of the old home, guests today can look out on the plantation’s first formal gardens surrounded by box hedge. Horses nibble grass in a green pasture beyond the lawn. Peacocks strut—and occasionally fan their jewel-colored tails. Barnyard animals live in an enclosed area where anyone can go through the gate and pet or take photos.

We chose to combine a city tour with a visit to Magnolia Plantation on Charleston’s Finest Historic Tours, Inc. There are many options for seeing Charleston and the other plantations along the rivers, including driving one’s self to Magnolia Plantation or other sites. However, I enjoy the narratives—the stories—from the guides. For more information on a tour, contact www.historictoursofcharleston.com.