You are here: Home / Blog / RV Travel Tales: Marvel Cave—Millions of Years of Creation, A Century of Discovery
This post may contain affiliate links or mention our own products, please check out our disclosure policy here. 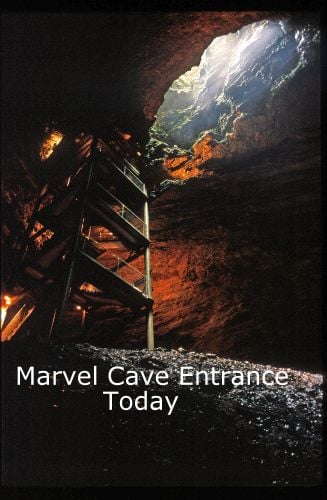 Caves are so numerous in the Ozarks that they form the rocky skeleton of the hills, the late Phyllis Rossitor wrote in A Living History of the Ozarks. Holes in the Ozarks Mountains are as obvious as freckles on a ten-year-old’s face. Some are no more than a shelter in the rock shelf. Others hold mysteries and legends; rivers and waterfalls; blind fish and flying bats. Marvel Cave, the rock skeleton supporting the theme park, Silver Dollar City in Branson, Missouri, claims all of these features.

The earliest legend hinges on an Osage hunting party chasing a black bear up the rough slopes of Indian Ridge. When the hunters reached the top of Roark Mountain, they saw the fleeing bear trapped on a ledge above a hole in the hillside. The story goes…a young Osage climbed down to flush the animal from its hiding place. Knife in hand, he lunged; the bear fought back, and the bear and the boy fell over the edge. No sound echoed from the deep, black hole. 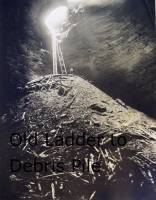 The next morning, the tale continues, tribesmen returned to the sinkhole. Some slashed V-notches in the surrounding trees, designating the place as evil. The Osage called the seemingly bottomless pit Devil’s Den. For decades, no one approached the opening.

Few pioneers homesteaded in the Ozarks in the early 1800s. However, the hearty souls who determined to eek out a living on the rocky soil listened to accounts of the vanishing hunter, as well as stories that Ponce de Leon searched the cavern for the Fountain of Youth. Around the hearth in Ozarks cabins, tales grew taller as mountain men swapped tidbits about gold coins hidden in the cave. Some related versions of Spanish prisoners escaping a cave chamber over a ladder of human bodies. Whispers of a dead animal room circulated

The Civil War took men from their isolated Ozarks homesteads. Following the war, bushwhackers roamed the hills, threatening mountain families and stealing their food and possessions. In defense of the lawlessness, some men of Stone County organized a home militia for protection. In a quest to restore peace to their mountains, the masked riders known as Bald Knobbers, over-stepped the boundary between a man’s misconduct and outright terrorism. Rumors of a Confederate guerilla pitched into the sinkhole of Devil’s Den traveled along the mountain ridge.

No one dared to explore the cave until 1869 when Henry T. Blow, a lead mining magnate from St Louis, and a few miners lowered themselves into the hole in the mountain. They found no lead, but reported marble in the flat ceiling of the chamber known today as the “Shoe Room.” As a result of their account, hill folk renamed the chambers and passageways under the sinkhole Marble Cave. Folklore, and later, newspapers and magazines, romanticized the legends and speculations about the chasm atop Roark Mountain.

In the late 1870s, railroads pushed into new territories of the United States. The A. & P.R.R. tracks reached Springfield, but the mountainsides around Branson and the cave proved too rugged for railroad expansion. The cave remained undisturbed for 13 years after the miners’ exploration. Although more settlers moved into the White River Valley, tales about Bald Knobbers and the sight of thousands of bats flying from the sinkhole in twilight kept people from lowering themselves into the inky black hole.

By 1883, Truman S. Powell, T. Hodges Jones, and several other men from Lamar, Missouri, explored the property and formed the Marble Cave Mining and Manufacturing Company, expecting to mine treasured marble. The company’s geologist confirmed that the ceilings and walls were limestone. Massive piles of bat guano (droppings), 25 feet in height, proved the only resource of value. To recoup their investment, the miners lowered ore carts and donkeys into what today is called the Cathedral Room. They mined out the guano, which brought $700 a ton for the manufacture of gun power and fertilizer. A pulley system lifted huge buckets loaded with the “black gold”out of the cave. However, the donkeys fared poorly, and most died of pneumonia.

After four and a half years, Marble Cave Mining Company closed all operations, leaving the platted town called Marmaros at the mouth of the cave deserted. The mining venture had created a bustling village that boasted a hotel, a general store, a pottery shop, a white oak furniture factory, a school, and rumor has it, a saloon. Marmaros was a stagecoach stop between Springfield, Missouri, and Berryville, Arkansas.

In 1893, Canadian William Lynch and his two unmarried daughters, Miriam and Genevieve, packed meager household furnishings on a mule and journeyed to the Ozarks to claim ownership of Marble Cave and open the cavern for tours. In a state famous for caves, Missouri’s deepest cavern is appropriately the starting point for Branson’s tourism. A faded ribbon from the grand opening of Marble Cave in Onyx Park, October 18, 1894, rests in the archives at Silver Dollar City. The only improvement for that grand day—a wooden ladder extending down the ninety-four foot sinkhole and resting on the mountain of debris swept naturally down the cave’s mouth and hardened by eons of limestone falling from the ceiling.

In 1920, the railroad opened from Branson traveling west. Lynch negotiated a flag-stop called Roark Station where travelers could detrain, ride a horse, or hike to the cave. Following their adventure, they returned to their coach. After William Lynch’s death, his daughters operated the tour cave until the Herschend Family leased the property in the 1950s. By that time, they had changed the name to Marvel Cave.

In the early tours, folks backed down the rickety ladder and viewed the natural wonders by candlelight. The Lynches considered kerosene lanterns too risky, so they provided candles to visitors up until 1932. A traditional tour required eight hours. At the surface, they outfitted guests in coveralls with leather seats for sliding down muddy slopes.

The adventuresome souls who descended into the pitch-black depths of the Cathedral Room, which is recognized as one of the largest cave entrance rooms in North America, believed the tour worthy of their ticket money, their time, and significant strenuous effort. The room measures over 200 feet in height, 225 feet in width, and is 400 feet long. Guides led them past a formation known as the Liberty Bell and down the winding Serpentine Passage to the Egyptian Room. The well-educated Lynch sisters thought the linear layers of rock on the chamber’s walls brought to mind Egyptian architecture.

With no modern-day handrails and concrete steps, they slowly crept down the Corkscrew, past the Gulf of Doom, and into the Waterfall Room. Flickering candles cast strange shadows on the stone walls. The rushing sound of water falling over the ledges deep in the cave unleashed imaginations that heard voices calling out names.

Until 1958, cave tours ended at the Waterfall. Visitors retraced their steps over one-half mile to the cavern’s entrance. In the early tours, visitors grasped pick axes to climb their way to daylight over the mountain of debris formed over millions of years. In the mid-1950s, Hugo and Mary Herschend leased the cave from William Lynch’s daughters. Their teenaged sons, Jack and Pete, adapted quickly to exploration of the caverns that stretched beyond the once evil-deemed sinkhole. They asked their parents for Christmas presents such as an aluminum ladder to climb to the top of Blondie’s Throne, a sugar-white flowstone formation, and an inflatable raft for investigation of the lakes in the cave’s depths.

The Herschends upgraded the cave tours, replacing the ladder descending into the Cathedral Room with steps. Lighting enhanced the stalagmites, stalactites, waterfalls, pits, and domes. Hugo Herschend’s vision for improvements included a European-styled cable car system to transport visitors out of the cave in comfort. However, at age 55, the elder Herschend succumbed to a heart attack, leaving his widow and sons a legacy in a hole in the ground. The family forged ahead, building what was called by the U.S. Army Corps of Engineers an impossible cable train. Jack Herschend credits the ingenuity of Ozarks men in their employment, who figured out how to wind the train around a 157-degree curve using convex wheels that thread a cable. In 1959, the first year of the train’s operation, Marvel Cave’s business increased forty percent. The train continues to transport guests safely from the cave’s depths.

The Herschends acknowledge their award-winning theme park, Silver Dollar City, surrounding Marvel Cave’s entrance, exists because of a mysterious calling of underground wonders within both William Lynch and Hugo Herschend. The hard work, prayers, and deep faith of both the Lynch and Herschend families changed the face of Roark Mountain forever. Upon their deaths, Miriam and Genevieve Lynch bequeathed the cave property to the College of the Ozarks and the Branson Presbyterian Church. The United States Department of the Interior proclaimed Marvel Cave a Natural Landmark. Herschend Family Entertainment continues to lease the cave.

Today, guided Traditional Tours through Marvel Cave are offered every half hour during Silver Dollar City’s hours of operation. The theme park, built as a reproduction of the old mining town of Marmaros, includes a tour of the historic cave with its admission price. A 4:00 p.m. Lantern Tour gives visitors an experience in the cave similar to that of the folks who took tours with the Lynch sisters back in the first half of the 20th century. However, all visitors today enter the cave on a 100-foot tower with steel and concrete steps descending the sinkhole to the debris pile. All walkways through the cave are paved. A guide for the tours relates historical and geological information. Each guided tour is less than an hour in length.

For more information, go to www.silverdollarcity.com/theme/Marvel-Cave.