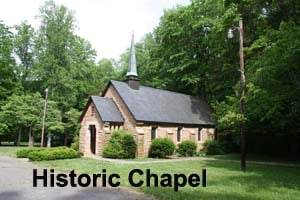 Montgomery Bell. The name itself rolls off the tongue like Southern sweet tea. This Tennessee State Park is a resort with the amenities of an inn and conference center, a restaurant featuring down home Southern foods and tables with lakeside views, a campground, and an18-hole golf course recognized nationally in Golf Digest. Additionally, the 3,850-acre oak and hickory wooded park has three lakes for fishing and boating (no outboard motors allowed) and 20 miles of mountain bike trails and 20 miles of hiking trails. At the Park Inn, an indoor and outdoor pool is open to inn and cabin guests. A swim beach on Lake Acorn is available to the public during summer months. Lake Acorn offers summer rentals of paddleboats, canoes, and fishing boats.

However, the history of the park intrigued us more than the amenities. Over two centuries ago, the treasure of iron ore was discovered beneath the rolling hills of Tennessee’s Western Highland Rim. A young man named Montgomery Bell came from Pennsylvania to seek his fortune; he built his empire upon the fledgling iron industry. For over half a century, men hired by Bell scratched the earth for iron ore and cleared the hardwood forests for fuel. Montgomery Bell, for whom the resort park is named, became one of the wealthiest men in Tennessee. The Civil War, fought on numerous fronts in Tennessee, put a stop to the prosperous iron industry. Idle furnaces, abandoned pits, and a ravaged landscape were left behind. Slowly nature took over and restored the forests. Although mostly hidden today, a few pits where iron ore was dug and scattered pieces of the Laurel Furnace remain on the trails—if one looks closely.

In some parts of the park, a few untouched trees stand high above the new growth forests. On some trails near water, hikers still see leftover slag that has been washed away from the iron ore pits. Homestead foundations, hidden now by the forests, are reminders of long ago history. In springtime, patches of yellow daffodils mark the old home places.

Yet, other historical remnants of interest on the park property surprised us. Back in 1810 Reverends Ewing, King, and McAdow constituted the Cumberland Presbytery. Reverend McAdow’s cabin, where the three men founded the denomination as an outgrowth of the “Great Revival of 1800,” remains in Church Hollow. Nearby, the Cumberland Presbyterian Church built a chapel that is today available for weddings. Services are held each Sunday during the summer months. A shrine to the birthplace of the Cumbeerland Presbyterian Church stands between the chapel and the McAdow cabin.

In 1935, the Resettlement Administration, the National Park Service, and the Civilian Conservation Corps (C.C.C.) joined forces to develop the Montgomery Bell National Recreation Demonstration. The C.C.C. built Group Camps 1 and 2, which are still in use today. In the 1930s, those young men also built a dam with a rock stair step spillway across Four Mile Creek and formed Lake Woodhaven. The spillway is one of the park’s most picturesque sights.

Throughout the year numerous programs are conducted, including nature hikes, canoe floats, wildflower walks, wildlife presentations, and historical talks. An annual Americana Folk Festival happens the second week in October. Montgomery Bell State Resort Park is a relaxing get-away, but also a pleasant stop for cross-country travelers along I-40.

Directions: From I-40, take Exit 182 (the Fairview/Dickson Highway 96 exit). Turn west on Highway 96 and travel to a dead end at U.S. Highway 70. Turn right on the off-ramp and travel approximately three miles to the Main Park Entrance on the right.