You are here: Home / Blog / RV Travel Tales: My Old Kentucky Home
This post may contain affiliate links or mention our own products, please check out our disclosure policy here. 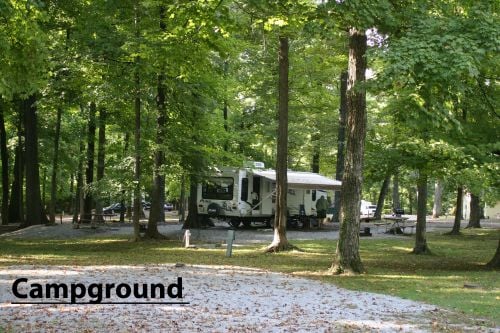 Who among our adult generation does not remember singing Stephen Foster’s “My Old Kentucky Home”—or at least hearing the melody and words? In Bardstown, Kentucky, we visited My Old Kentucky Home State Park, a lush and lovely property dotted with huge old trees. The park’s centerpiece is Federal Hill, a former plantation built in 1795 by United States Senator John Rowan and his wife, Anne. Tradition claims that the old two story mansion was the inspiration for Stephen Foster’s song. After all, he was a cousin of Senator Rowan—and he might have visited Federal Hill in 1852. Nevertheless, the story forever intertwines the house and the song, which was designated Kentucky’s state song in 1928. The State Park honors Stephen Foster, as well as the prominent Rowan family that occupied Federal Hill from 1818 to 1922. My Old Kentucky Home Commission purchased the home from Madge Rowan Frost, the last mistress. She stipulated that the home never be sold, and remain a tribute to Stephen Foster. Originally the property was designated a state historic site, but was transferred to the Division of State Parks and became My Old Kentucky Home State Park in 1936. The Federal Hill mansion was featured on a United States postage stamp in 1992, and as one of the symbols on the reverse side of the Kentucky state quarter issued in 2002.

Federal Hill, commonly called “The Home” by park employees, is Georgian-style architecture. The west wing was completed first and the family moved from a nearby two-story log cabin into those rooms in 1812. However, a stately mansion of its size took many years and numbers of laborers and craftsmen for its completion in 1818. Lumber was cut from trees on the property and seasoned on site. Doors, window frames, and facings were handmade. A free black craftsman carved the windowsills and mantels on fireplaces that heated the home. With slave labor, bricks of clay were molded by slave labor at the plantation. Nails, glass, and hardware had to be shipped from the east. A coal furnace was added in 1923; electricity and oil in 1950, and gas in 1970. Yet, plumbing has never been installed.

Each of the original 13 rooms was 22×22 feet with ceilings 13 feet in height. The number 13, representing the original 13 colonies, continues that number of  windows across the front of the house, 13 inches of brick in the interior and exterior of the walls, 13 steps to each landing, and 13 railings across each landing. For many years, the home was interpreted to the life of Judge John Rowan, its builder and original occupant, says Federal Hill curator Ron Langdon. During that time, Federal Hill was a local center for legal, political, and social events. Prominent visitors to the home included Marquis de Lafayette and Henry Clay. However, the house was altered after an 1840 fire. A million-dollar restoration in recent years added bold colors in carpets and patterned wallpaper that brought the house into the 1840s when it was occupied by John Rowan, Jr. and his wife, Rebecca—and closer to the time Stephen Foster might have visited. Approximately, three-fourths of the home’s furnishings are Rowan family items. Today, the house is interpreted from 1840 to 1855 as if John and Rebecca Rowan were still living there and entertaining Foster.

Like his father, John Rowan, Jr. was also prominent, serving as ambassador to Italy in 1848. He died in 1853, due to a fall from a second-story window at Federal Hill. He left his wife with nine children to raise. Documents show that she often wrote to a relative, Colonel William P. Boone, asking for money to feed the children and repair the house. Curator Langdon gives Rebecca Rowan credit for preserving the home and its contents under very adverse circumstances.

Guests long ago stepped first into a wide hallway. Approximately 30,000 visitors annually step through the front door and into the same hall. The rear door, directly in line with the front entrance, is called a coffin door, built wide enough for a coffin and pall bearers to pass through when a death occurred in the family. In those days, people laid in state in the parlors of their homes. Often, the funeral service took place in the home.

The time John Rowan, Jr. spent in Italy is noted in a series of watercolors and a pair of Old Paris vases that decorate the front parlor where the Rowans would have entertained guests. A square grand piano with mother-of-pearl ivories sits in one corner of the formal room. A medallion given to John Rowan, Jr. by Pope Pious the Ninth hangs on the parlor wall in the exact spot that historic photographs indicate it hung during the younger Rowans’ lifetime. This interesting piece was a gift from the Pope when Rowan helped him escape an assassin’s attempt on his life while the Rowan family lived in Italy.

The tour continued to the back parlor, also called the library, where the family likely played games or read in the evenings. The Gothic-styled wallpaper and carpet today has a cross-style design, a tribute to the fact that Rebecca Rowan converted to Catholicism while she lived Italy. Her portrait hangs over the mantel and a portrait of Stephen Foster hangs between two windows. The library holds over 300 law books; the oldest dates to 1701.

The family took all their meals in the dining room on the opposite side of the great hallway from the formal parlor. According to history, children under the age of twelve ate in the kitchen. Typically, three meals were served daily, breakfast early in the morning, the main meal in early afternoon, and a light—or cold—supper from the afternoon meal’s leftovers. Family portraits hang on the walls of the Rowan’s dining room. A back doorway leads to the kitchen, which is separate from the house. Slaves carried the food on trays from the kitchen to the dining room.

Going upstairs to the bedrooms, the tour passed a grandfather clock positioned on the landing between the first and second floors so it could be seen from either floor.  The upstairs tour included the master bedroom, the lady’s bedroom, and a girl’s bedroom.

Today, the mansion is open daily for guided toursfrom 9:00 a.m. to 5:00 p.m. (EST), June through August. March to May and September to November, the schedule runs 9:00 a.m. to 4:45 p.m. During the winter period, January 2 to February 28, the mansion is open Wednesday to Sunday. No tours are conducted on Thanksgiving Day, the week of Christmas, and New Year’s Eve and Day. Admission is charged to tour the home.

The park also offers visitors a 39-site shady campground, a gift shop, and an 18-hole golf course. The campground provides full and partial hookups, (no 50 amp service) showers, restrooms, and a dump station. Only about half the spaces accommodate larger RVs. The campground is crowded when Bardstown events happen, such as the Bourbon Festival in mid-September. Advance reservations can be made at 888-459-7275.