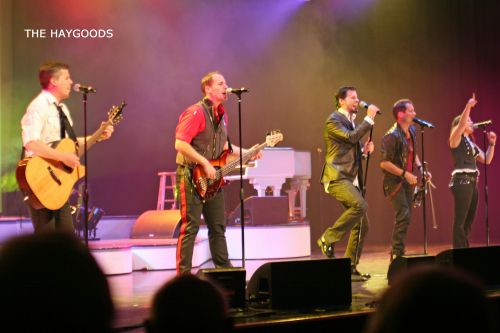 In mid-February, 2014, the Haygoods, a high energy entertainment family, kicked off their 21st season in Branson, Missouri, at The Clay Cooper Theatre. Starting their musical careers at the 1890’s themed Silver Dollar City back in 1993, the seven brothers and one sister performed five shows a day, five days a week while squeezing in instrument and dance lessons, as well as schoolwork. Mom and Dad Haygood took a chance in moving their eight children from their home in Boerne, Texas, to accept a summer contract performing as The Haygood Family Fiddlers at Silver Dollar City. Their “gig” extended through Christmas. That winter, Dad Haygood took maintenance and construction jobs at the theme park. Mom and the kids practiced violin for hours every day. The contracts—a year at a time—kept coming. Each year, Mom Haygood said they sat down as a family and decided if they were going to commit to play music for another season—or catch the big yellow school bus as it passed every morning. The decision was unanimous for music. For the next eight years, the youngsters grew up in a theme park, honed their talents from lessons in music and dance, but also from fellow performers in the park. The drive and persistence of oldest brother Timothy resulted in the family show becoming the most successful, highest rated show in the history of Silver Dollar City. Youngest brother Aaron Haygood, who arrived in Branson as an infant, summed up the experience. “I started on stage when I was two years old, so my earliest memories are of applause and hard work. Oh, and getting to ride the roller coasters every day!” The Haygoods completed over 10,000 shows during their years at Silver Dollar City.

Mom and Dad Haygood believed there was no better environment for their family than the family-oriented Silver Dollar City. While the parents worked as hard as the kids, rising early to pack them and their instruments into a station wagon for the short drive to the park, they stated their goals: to honor God, to strengthen their family, and to stand up for their country. Mom had an additional goal that she kept close to her heart—that each of her children would perfect his or her talent to the level of expertise to be able to earn a living individually in the music business. 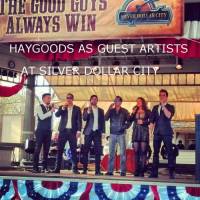 Behind the scenes at Silver Dollar City, they supervised school work along with music lessons. Mom designed costumes and worked with producers and choreographers for each season’s show. Trade offs for kids’ hard work—a theme park for a back yard and lunch of their own choosing every day from Silver Dollar City’s menus. Only Matthew had to be reined in once for spending his total lunch allowance on cheese cake!

I watched this family grow. Each year their act added new instruments, more dancing, fresh costumes, and refined vocals. I had the privilege to sit through hours of their shows at Silver Dollar City; once I spent the day at their home, awed at the efficiency of their daily practice schedule and their list of chores for the day. Since Mom Haygood practiced individually with each child according to the Suzuki method of violin, Dad did shopping and meal preparation. The boys’ bedroom resembled a bunk house. Each child, except for the two little ones, Catherine and Aaron, did his own laundry. They shared “dish” duty. And playtime? Pure abandonment as they dashed from their home and jumped on bicycles to ride like the wind down to the lake, Catherine atop one brother’s shoulders and Aaron tucked inside another’s jacket.

The youngsters grew, eventually headlining Silver Dollar City’s premier theatre, the Opry House. But ambitions to take their music to an audience beyond the theme park’s gates built with each year of maturity. Backed by a generous loan from their grandmother, the Haygoods took a giant risk and opened their own show on the Branson strip in 2001. The move from a theme park to the entertainment town was more than a location change. The three oldest Haygoods also took creative and financial control of the show and began to make their mark on the show’s presentation and on Branson’s music scene. The Haygoods became the youngest performing family to ever open their own show on the Branson strip.

At the end of their first full season, the Haygoods reached a crossroads; they could push ahead despite financial hardships or give up the music business for so-called normal lives. But music was in their blood. The siblings had known since they first played fiddles and sang at nursing homes and fairs back in Texas that they were destined to make music. They set about making their “town” show the most exciting on the Branson strip. With Dominic as music director, they began to take classic songs like “Thank God I’m a Country Boy” and “Eleanor Rigby” and add their own musical twists. Familiar songs from Motown were updated with modern dance moves and unique harmonies. At the same time, the spirited Haygoods began reclaiming their childhood by filming their wild BMX and paraplane stunts, which made them a You Tube sensation. “We finally started to realize everything was going to be OK. We loved playing our music together and we felt like we had achieved a measure of success,” said Shawn Haygood.

In 2009, the Haygoods took yet another chance on themselves and their music, staking everything they had in their own theater on the Branson strip. The Haygood boys had become men and their decision to buy the Americana Theatre was an investment in their musical future.

At the same time, the Haygoods set about creating their own original music with hope of reaching a national audience. Daily jam sessions and boxing matches led to recording studios and bringing in producers to help refine their music. Their first album “Leaving It All Behind” was released in 2010. Without any radio support, record label support or even digital downloads, the album sold over 10,000 physical copies in its first two months of release.

In the fall of 2011, The Haygoods teamed up with the RFDTV network, a cable channel distributed in over 50 million homes in the United States, and many more worldwide, to create a reality/music television show. In addition, The Haygoods moved their live show to the RFDTV Theatre on the corner of Shepherd of the Hills Boulevard and the famous Highway 76 Strip. At the same time, they retained the Americana Theatre and booked morning, matinee, and evening shows on its stage. Cassandre’, Voice of an Angel, continues to anchor the Americana’s line-up

The television show called “Adventures of The Haygoods” did well on the RFDTV network and garnered good Nielson ratings, especially for a completely unknown group. New seasons developed, and re-runs continue to air.

The Haygoods completed their 2013 season at the RFDTV Theatre. In late 2013, they announced their move to the Clay Cooper Theatre.  “We have invested in new lights, sets, and special effects and this year’s show will be our best ever,” said Michael Haygood, lighting designer and guitarist for The Haygoods. To be even better is a huge boast since the Haygoods are already one of Branson’s longest running and most successful shows. The group, now five brothers and one sister, is known throughout the Midwest for their incredible productions punched with oomph. Combining their talents, the Haygoods play over 20 instruments, sing with harmony, both powerful and pure at the same time, tap dance as if their feet are on fire, and entertain crowds with a state of the art show featuring music from the 60s through today.

“These guys know how to put on a super exciting, high energy show and that’s why they draw large crowds year after year,” said Clay Cooper, owner of the Clay Cooper Theatre. “I’m turning them loose in my theatre, so audiences, hang on to your seats. It’s gonna be a wild ride.”

When asked what audiences could expect from The Haygoods Show this year, Dominic Haygood replied with a huge grin, “New routines, new music, a bigger production, and lots of surprises. Our lasers and new special effects will put it over the top, but the new music is what excites me.”

The Haygoods will excite any RVer who is planning a trip to Branson. The six young adults put on a “must-see” show. For information and tickets call the box office at 417-339-4663 or go to http://www.thehaygoods.com