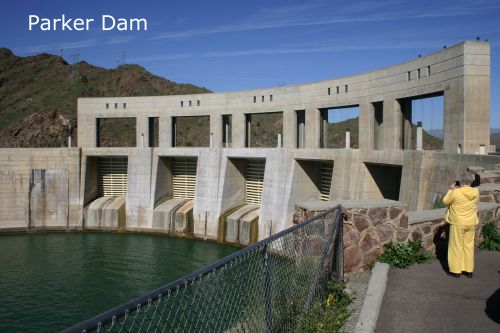 Parker Dam crosses the Colorado River about 155 miles downstream from the well-known Hoover Dam. A concrete arch-gravity dam built between 1934 and 1938, the 320-foot structure is considered the deepest dam in the world. Two hundred thirty-five feet of its concrete burrow beneath the riverbed. Straddling the river border between Arizona and California, the dam’s functions are twofold—creating the reservoir to provide water to major cities in Southern California and generating hydroelectric power.

However, to the Native Americans who were invited to the dedication ceremony, a third function took precedence over the practical ones of clean water for neighborhoods and electricity to power home and business lighting. Magic! The Spaniards were the first to name the Rio Colorado, a river running muddy and red through the desert. The Native Americans at the dam dedication ceremony were unimpressed with the height of Parker Dam and its ingenious construction. Yet when they walked across the roadway atop the dam and viewed the expansive waters of a lake, they excitedly said: “Havasu.” They decreed Parker Dam as magic because it turned the muddy red water to clear blue. Havasu, which means blue in their language, became the name of the expansive impoundment of over 210 billion United States gallons of water.

Lake Havasu is the water source for the Colorado River Aqueduct, which is operated by the Metropolitan Water District of Southern California. The district paid for 90 percent of the dam’s construction cost and supplies water to Los Angeles, San Bernardino, and San Diego. However, Parker Dam is owned and operated by the U.S. Bureau of Reclamation. Water from Lake Havasu also goes to the Central Arizona Project Aqueduct which provides water for irrigated agriculture areas, as well as for the metropolitan areas of Phoenix and Tucson.

Half of the electricity the power plant produces at the dam is used by the Metropolitan Water District to pump water along the Colorado River Aqueduct. The rest is sold to utilities in California, Arizona and Nevada. The generation of power is limited by a requirement to keep the water level of Lake Havasu between 440 to 450 feet for recreational purposes.

Like most things in our country, Parker Dam was not built without controversy—some of which continues today over water negotiations. Built as part of the larger Colorado River Compact of 1922, Arizona was not pleased with the plan in general. When members of the Arizona National Guard observed construction on the Arizona side, the governor sent more National Guard troops to halt construction. Unlike the theme over water rights in many Western movies which were typically settled with six-shooters, the issues between California and Arizona were taken all the way to the Supreme Court. Suprisingly, the Supreme Court sided with Arizona and declared the dam had never been directly approved by Congress and California was not entitled to build on Arizona land. Arizona finally gave permission for the dam in exchange for approval of the Gila River irrigation project.

Crossing the narrow roadway on the curved dam today (no RVs allowed), one scarcely if at all, thinks about water rights that were adjusted as recently as 2000. In 2008, Arizona Senator John McCain called for a renegotiation of the plan. Those of us, who take the walkway, peer over the dam into Lake Havasu’s expansive blue waters. More than water rights or power from electricity, we think about fishing, jet skis, and excursion boats. Or like the Native Americans, we may think “magic.” Below the dam, a road trails alongside the river on California’s side, passing resorts, campgrounds, and even stray wild burros. Looking across the Colorado, high dollar houses and condos mark Arizona’s border. Highway 95 parallels the Colorado on the Arizona side into the small town of Parker.

Parker and other dams tamed the Muddy Red, providing a scenic backdrop for recreation, as well as clean water and electrical power for numerous cities. Because of Parker Dam, a once desolate piece of desert has become a winter getaway for thousands of RVers and a summer vacation destination for water sports enthusiasts. But let us not forget the men and women who hammered out the plans for the dam and campaigned for water and electricity rights. As we enjoy Parker Dam and the beautiful area it created, let us remember the men who labored on its construction and the families that supported them. The plans, the arguments, the negotiations, the construction workers, and the families who called Parker, Arizona their home are a part of the framework—and magic—of Parker Dam.