You are here: Home / Blog / RV Travel Tales: Revisiting Jackson, Wyoming
This post may contain affiliate links or mention our own products, please check out our disclosure policy here. 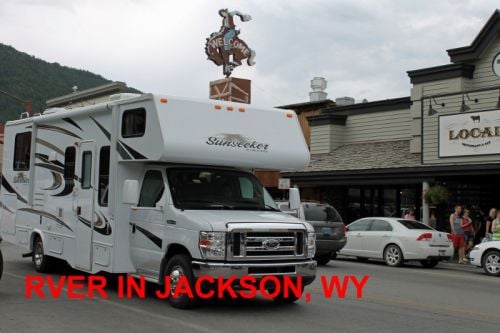 Thirty summers ago, I traveled to Jackson, Wyoming—known to us only as Jackson Hole. We had planned to enter West Yellowstone’s south gate when we received a phone call that my father-in-law had suddenly died. Plans immediately changed; our travel partners packed their RVs to head back to Arkansas while my late husband and I booked a flight home from the Jackson Hole Airport. We left behind our fifth-wheel with a warning from the person who rented us storage space that if we did not return for it by September 15, the trailer would be snowbound for the winter. We went back in late August and drove our unit home.

A lot of changes have occurred over the past 30 years, not only in my family, but with the four couples who traveled with us that summer in 1984. Four out of the ten who made the trip to Wyoming are still living, and I am the only one who continues the RVing lifestyle. On a day trip from West Yellowstone with Lee, I once again visited Jackson, driving through Idaho farmland and across Teton Pass at an elevation of 8,432 feet at its summit. Following Wyoming Highway 22, we dropped to 5,672 feet into Jackson. I saw changes in the northwestern Wyoming town. According to the latest census, population today is 8,647. And on that particular Monday in late July, Jackson bustled with tourists and traffic.

The community, the valley, and the lake were all named for mountain man, trapper, and trader, David Jackson. Jackson Hole is a basin—or a valley—surrounded on all sides by mountain ranges.  The valley stretches 48 miles in length and approximately six to eight miles in width. The “hole” lies a few miles west of the Continental Divide. The central portion of the Snake River’s headwaters form in the Jackson Hole Valley, fed by mountain streams that race with snow melt from surrounding slopes to the river. I remember a float trip on the Snake that summer 30 years ago. Clouds hung low, obscuring the snowcapped mountains edging the river.

I recognized little in Jackson except for the town square named George Washington Memorial Park and its four arched entrances formed from elk antlers. The National Elk Refuge, northeast of Jackson, is home to thousands of elk each winter. Local Boy Scouts harvest the shed antlers each spring and sell them as a fund raiser for their organization—after they maintain the archways that form a Jackson Hole landmark. Visitors roamed the green grass in the small park, sitting on benches and admiring statues. Giggling children played games of tag around the trees. Shops of every description, all with western facades, frame the town square. Shopping for everything from cowboy boots and saddles to candy and cabin décor is only one of the activities in Jackson. A shop called MADE carries house wares, jewelry, food, gifts, and buckles, all handmade by local artists and others throughout the United States.

The town is a hub for outdoor recreation summer or winter. Wildlife watching tops the list with elk, deer, and other small mammals residing throughout the valley. Bird watchers find an abundance of species hanging out in the area, including ducks, geese, and Trumpeter swans. In the wintertime, skiing on the mountain ranges becomes the number one attraction. Several facilities such as Jackson Hole Mountain Resort, Snow King, and Grand Targhee, offer skiing opportunities, as well as lodging. At the National Elk Refuge, visitors can take sleigh rides among the elk from mid-December through April. On summer days, authentic stagecoach rides around the town are the preferred mode of travel.

Jackson, a town of the Old West since 1914, appeals to people with all kinds interests: art galleries for art lovers, majestic mountains for outdoor enthusiasts, outstanding restaurants, and museums for those delving into history. Numerous galleries display both western and contemporary paintings, as well as pottery, metal and leather artwork, and jewelry. The Jackson Hole Museum was founded 50 years ago and is a place where the Old West remains alive. Current exhibits include “The Art of the Hunt” with mounts of elk, deer, and moose, and a display of the progression of making a bighorn sheep bow. “Homesteading in the Hole” features a cabin and barn reproduced to look like buildings in Jackson’s early years. “Indians of Greater Yellowstone” displays the culture and contributions of Native Americans to the Yellowstone Ecosystem—and Jackson Hole. The History Museum has a separate research facility that includes a library, archives, artifact collections, and a historic collection of more than 15,000 photographs available for reprint. Educational programs are offered year round. The National Museum of Wildlife Art holds an internationally acclaimed collection and is housed in a building that represents a rock outcropping overlooking the National Elk Refuge.

Jackson maintains its western character. But the town offers culture, too, at the Center for the Arts and The Dancers’ Workshop. Productions take to the stage year round with events as varied as the New York City Ballet, the Jackson Hole Art Fair, A Historic Evening with Anne Frank’s Stepsister, Clybourne Park Staged Reading presented by Off Square Theatre Company, documentary film screenings, and Jackson Hole’s first-ever science festival to celebrate the wonders of everyday science.

Jackson, Wyoming, retains the past, yet thrives in today’s world. Visitors can step into the Old West, but emerge in an evening’s entertainment straight from one of America’s large cities. One can marvel at nature’s creations, but also dine on gourmet food in one of many establishments. Winter comes and turns summer’s green a snowy white, but the experiences of Jackson Hole continue. It’s a place to visit—and revisit.