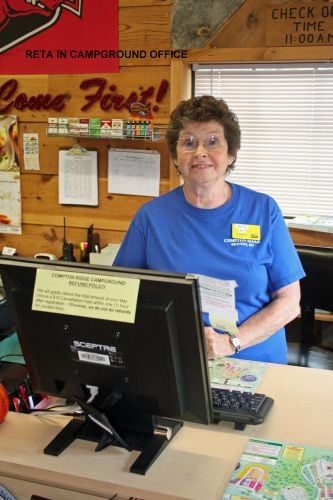 From our acquaintance with Richard and Reta Averill and following many of their Workamping experiences, we knew they are Workampers Extraordinaire. Yet, recent personal challenges, followed by Richard’s recognition in the country music field places them a level or two above extraordinary.

In the dozen or so years the Averills have claimed highways as home turf, their eagerness for new experiences led them to different Workamping situations, including both volunteer stints and paying positions. Their plan for Workamping came from their goal to get to know the people and customs of particular areas of the United States. “The earnings and amenities are a bonus that defrays our living expenses,” Richard says. “But meeting folks, keeping in touch via e-mail, and then meeting again as we travel to another place is the most fulfilling part.”

Richard retired after 34 years as an analytical technician in the research center at Phillips Petroleum in Bartlesville, Oklahoma. Reta, who grew up in Coffeyville, Kansas, worked in accounts payable for Phillips Petroleum, but also held jobs with a Federal Credit Union and in quality testing for a pump company. In their blended family, the Averills raised four children. When their nest emptied, they bought a Class-A motorhome and began full-timing.

By accident, they fell into their first job at Big Bend National Park. Merely passing through following an extended trip down the east coast from New England, they arrived at Big Bend National Park’s Rio Grand Village Campground in the autumn. Because the park was full, the host permitted them to set up in the alternate host site. “He mentioned they needed alternating Workampers,” Richard says. “We had the time, so we asked if we could volunteer. Within two days, the district ranger and volunteer coordinator ran background checks on us. We filled out applications and went to work.”

After Big Bend, Richard and Reta volunteered 14 hours each per week in exchange for their site at Belfair State Park on Hood Canal across Puget Sound from Seattle, Washington. “On our days off, we toured the Olympic Peninsula, Mount St. Helens, Mount Rainier, and the Yakima valley,” Reta says. “Our oldest daughter lived close to Belfair, and we spent time with her family and attended our granddaughter’s high school graduation.”

The Averills spent two summers working at private campgrounds in New York.  “The Yogi Park at Mexico, New York, was our first Workamping-for-pay experience,” Richard says. “Three years later, we accepted jobs in another resort at Associational Island, a 65-acre island with a causeway that provides access from the mainland. Reta worked in registration using Campground Manager Software, and I worked in maintenance.”

In a different year, the Averills worked at Riverbend Motorcoach Resort, a Class-A motorhome facility. Reta had duties in the office, and Richard in the guard station operating the entry gate. They worked 40-hour weeks with pay for all hours plus a full-hookup site, Wi-Fi, cable, discount at the clubhouse, and full use of the facilities. They admit that, if not for Workamping, they could never have afforded to stay at such an upscale resort.

Another winter, the Averills volunteered at Matagorda County Birding and Nature Center at Bay City, Texas. Sharing duties with one other Workamping couple, they opened gates to the 34-acre preserve at 6:00 a.m., and closed at 6:00 p.m.  “We worked 20 hours per week for our site and hookups at the back of the preserve on the Colorado River,” Richard says. “During the day we kept an eye on the ponds and flower gardens that draw the largest variety of migratory birds in Texas. We also helped out with small projects and mowing. And we observed birds we’d never seen before.”

One Christmas season, the Averills worked five days a week at Silver Dollar City, Branson, Missouri. “We dressed in 1890’s costumes and managed a concession for ‘smores,’” Reta says. “A covered wagon held our supplies and we had a table with hot chocolate and two charcoal pits. Guests toasted marshmallows on long skewers, and then placed them on a large chocolate chip cookie covered with fudge.”

Taking jobs for two winters at amazon.com in Coffeyville, Kansas, made sense for the Averills. “Seven of our eight grandchildren live in that area,” Reta says. “We like to travel there and stay until after the holidays.”

For the summer of 2009, Richard and Reta returned to Branson and worked at Compton Ridge Campground. Reta, experienced in programs for campground registration, fits into any office setting. She also helped to stock the store and with guest purchases. Additionally, she made to-order pizzas that Richard delivered to campsites. He also shuttled visitors to Silver Dollar City and Branson Landing, and kept ice machines stocked and wood boxes filled.

That same year, after celebrating an early Thanksgiving with family, Richard and Reta traveled to Admiralty RV Resort in San Antonio, Texas, for their winter jobs.  They each worked 12 hours a week for their 50-amp site, utilities, Wi-Fi, and cable, leaving them ample time for relaxation and sightseeing in and around. Reta worked in the office and Richard escorted guests to their sites and shuttled some to attractions such as Sea World.

When their winter assignment ended in Texas, the Averills headed for Door County Camp Retreat in Door, Wisconsin. They had worked three summers (not consecutively) at the campground where they made close friendships with other Workampers, the resort’s owners, and many of the seasonal campers. Reta worked in the office. Richard did outside maintenance, pool care, and dispensed propane. He also helped with the building of new sites.

“Door County is a great place to spend the summer and take in their cheese factories, cherry orchards, fresh vegetables stands, apple orchards, and numerous small villages and local restaurants,” Richard says. “Egg Harbor is only three miles from the campground where we worked. Once on the peninsula, we found only local businesses, which made for a quaint setting.”

One winter, Richard and Reta spent time in Louisiana, Mississippi, and the Florida panhandle, camping at Fort Pickens and Davis Bayou in the Gulf Islands National Seashore. Richard volunteered for about six weeks in visitor information at the Davis Bayou location. The Davis Bayou personnel participated in the first Mardi Gras parade of the season in Ocean Springs, Mississippi. As part of the staff, they both marched with other volunteers, tossing beads and stuffed toys to visitors. Reta says, “It was an afternoon, family oriented celebration with lots of people, music, and cheering. Our first ever Mardi Gras parade, and we were in it.”

For two winters, the Averills became gate keepers for a company in South Texas, a 24/7 job in a rural setting that required them to sleep in shifts in order that one was always on duty to open and close the gate for those who needed to access an oil drilling operation. All portable utilities were provided by the company. Although the days and weeks confined them to one location, the daily pay plumped up their wallets because they had no place to go or to spend any money. Reta recalls that she and Richard took turns driving some distance for errands and grocery shopping. Richard comments: “Staying in one location, usually rural and remote, often for weeks at a time, on duty rain or shine, hot or cold, calm or windy, isn’t for everyone. No pot luck dinners, game nights, or get togethers with fellow RVers happen. Still, it was a temporary job, not a career. 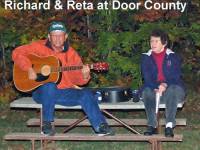 In the meantime, Richard and Reta bought a “fixer-upper” close to the Arkansas-Missouri state line—a place they planned to use as a home base, and perhaps, a permanent home when they totally retire from RVing. They took a contract with the U.S. Corps of Engineers as gate attendants at Horseshoe Bend Campground on Beaver Lake, working four days on and four days off for six months. Horseshoe Bend is a large campground and close to the population centers of Rogers and Bentonville in Northwest Arkansas. Horseshoe Bend is also only 60 miles from their new stick and mortar home. Most of their days off, they worked on their house.

While all these adventures and experiences reflected the Averills’ character, work ethic, and perseverance, their true mettle showed when Reta fell from a ladder while working on the house they were remodeling. She broke a leg so severely that in the end, it had to be amputated. At the same time, they were in the middle of a three-year contract with the Corps of Engineers. Despite Reta’s lengthy hospital stay in Springfield, Missouri, and Richard spending hours and days at her bedside, they managed to fulfill their commitment. Reta even returned to the job site before the season ended. Folks with less inner strength would have retreated to the house they had fixed up for days of relaxation. But not Richard and Reta. They renewed their commitment with the Corps for an additional three years.

Most recently, Richard revealed an aspect of his life that is possibly taking him to the New York State Country Music Hall of Fame. As a native of New York, he has been nominated and selected for induction into the New York State Country Music Hall of Honor—a first step toward the state’s Hall of Fame. The induction ceremony happens on October 26 and Richard looks forward to performing a couple of songs with the stage band. Reta, standing firm on a new leg, will lead his fan club. Although we have become well-acquainted with the Averills, we did not know of Richard’s involvement with music for most of his life. He played clarinet in high school and took up the guitar at age 19. In the mid 1960’s, he played with a trio in New York before he moved to Oklahoma. From 1969 until 1973, he played with a five-piece group based in Bartlesville. In 1972, the group won first place in the semi-finals at the Tulsa State Fair talent contest. From 1975 until the mid 1990’s, he played with The Country Cavaliers in Southeast Kansas, Northeast Oklahoma, and Southwest Missouri. We only knew that he played guitar at an Amazon Workamper’s worship service at a community park in Coffeyville, Kansas.

The Averills are one example of many Workampers Extraordinaire—RVing folks who have past achievements and challenges that are never revealed in their Workamping experiences. Many like Reta, exhibit amazing courage and determination to continue a life of giving back, despite physical circumstances that would knock most off their feet. And others, like Richard, keep on giving and giving with their talents and skills—revealing sides of their background and personal history that no one would have guessed. We hope Richard goes all the way to the New York State Country Music Hall of Fame. And we hope that Reta not only stands and walks, but one day runs a race. (We would not be surprised to hear that she has entered!) And if there ever is a Hall of Fame for Workampers, both Richard and Reta will be among the first nominees.