You are here: Home / Blog / RV Travel Tales: Shepherd of the Hills—The Story, the Homestead, The Play
This post may contain affiliate links or mention our own products, please check out our disclosure policy here. 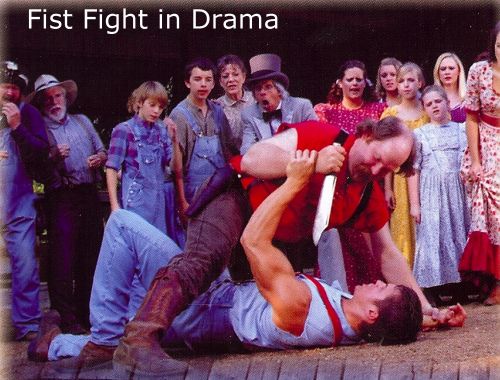 The story of The Shepherd of the Hills is—well, not as old as the hills—but almost as old as the first white settlers in the Ozarks Mountains of Missouri.

The fabric of Branson’s history is stitched with men and women who came into the Ozarks and fused their individual destinies with hill folks and the land itself. Harold Bell Wright, a Kansas minister who had been diagnosed with consumption, came to breathe the wholesome mountain air. Due to flooding on the White River, he asked for shelter at the John Ross cabin, intending to stay only overnight. In keeping with the customs of the Ozarks, Ross and his wife, Georgianna, and their son, Matt, welcomed him to their home. Wright stayed for eight summers.

The Rosses’ cabin had originally been one room for the three-member family. However, due to the production of their steam-powered grist and lumber mill, John and his wife, who answered to Anna, were well off financially compared to their Ozarks neighbors. An annual income of $350 and lumber from their own sawmill enlarged their cabin and allowed the luxury of a sewing machine for the tiny Anna and a push-style lawn mower for tall, brawny John. 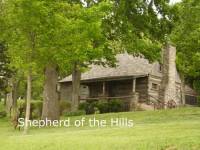 Wright eventually pitched a tent on the Ross homestead, making for himself a summer home on what would one day be known as Inspiration Point. During winter months, he moved into the cabin warmed by the old stone fireplace. Over several years, Wright made notes of his adopted Ozarks family, their neighbors, and the customs and traditions of mountain culture. He roamed the hills and valleys, storing in his imagination scenes for The Shepherd of the Hills, a novel published in 1907.

The Shepherd of the Hills, a classic story of good versus evil, immediately became a best seller. His characters, Old Matt, Young Matt, and Aunt Mollie, inspired by the Ross family, turned into legends set against the backdrop of oaks and green cedars spreading like a plush carpet over the mountainsides and spring-fed creeks spilling into rivers. Many speculated on the identity of Wright’s other beloved characters, Sammy Lane, the Old Shepherd, Wash Gibbs, Ollie Stewart, Preachin’ Bill, and Fiddlin’ Jake. However, the author claimed that “Uncle Ike,” the old postmaster Levi Morrill, who built his post office on the “Old Trail Nobody Knows How Old” happened to be the only actual portrayal of a living person. All others, he said, including Old Matt and Aunt Molly, were his created characters. His tale hinges on Ozarks’ pioneers and the stranger who entered their simple mountain community. The story wraps around the silent love of a strapping young Matt for the community’s favorite lass, Sammie Lane, her longing to become a refined lady, and the ghostlike boy who roamed the hillsides stirring superstitious minds with visions of “haints,” an Ozarks’ name for supernatural spirits. Wright created tension between the vigilante Bald Knobbers and the upstanding citizens who gathered at the old grist mill to picnic, dance, and gossip. Yet, a story comes to life only with conflict. Wright, a master storyteller, delved beneath the masks of peaceful existence to expose the stranger’s mysterious past and a father’s bitterness over the tragic death of his only daughter. Mixing facts and traditions with fiction, he intertwined a spellbinding tale.

Over a hundred years after the novel brought droves of tourists to the quiet Ozarks to view up-close a picturesque pocket of earth and its peculiar populace, the story still entertains tourists as an outdoor drama in the amphitheatre at the Shepherd of the Hills Homestead. The play runs four nights a week during the summer months and weekends only during the fall.With the old grist mill as a backdrop, a city slicker pursues the hand of the community’s comely miss, troublemakers incite fist fights, and masked horsemen torch a cabin.

Ninety actors perform in the drama, bringing to life the history of the Ozarks Mountains and the story Harold Bell Wright wrote. The directors consciously type-cast local residents in the roles that fit personalities and body type. The roles are scripted, but each actor has his or her own mannerisms and ad-libs. One of the Ollie Stewart characters runs and jumps on a tree like a tree frog. While the Shepherd of the Hills Outdoor Drama is the centerpiece of the Homestead, visitors find plenty to see and do throughout the daytime hours.

Inspiration Tower, a 230-foot tall structure located on Inspiration Point, is Branson’s “landmark on the horizon.” Two glass elevators transport visitors to the enclosed observation deck where guests get a view that stretches over Branson and Ozarks woodlands for up to 90 miles on a clear day. Vigilante Extreme ZipRider® flies guests over treetops for a thrilling vacation activity.

During the daytime, a jeep-drawn tram takes visitors on a guided tour of the homestead. First stop is Old Matt’s Cabin, the original home of the night time drama’s main characters. The modest log cabin stands in its original location, and is on the National Historic Registry. Inside the cabin, open for guided tours, the saddle of Lizzie McDaniel, the daughter of a former owner of the property, hangs on the back porch alongside one used by Anna Ross. Miss Lizzie, as she became affectionately known to hill folks, recognized the importance of preserving the homestead for its key role in the widely-read novel, as well as for the lore of the Ozarks.  She traveled for years across the Ozarks on the back of a mule buying back all the items the Ross son had auctioned after his parents’ death. A ceiling lamp in the living room once hung in Harold Bell Wright’s tent, pitched on the lawn. A spinning wheel and a weasel for making skeins of yarn both sit by the old stone fireplace. Various kitchen tools and Anna Ross’ size four shoes are displayed. Through the diligence of Lizzie McDaniel and her dedication to preserve a long ago setting, the cabin, once a home for the Ross family and the Kansas preacher who made the Ozarks famous, stands as the centerpiece of The Shepherd of the Hills Homestead.

Going back to the authentic roots of the Great American Cowboy in a variety of musical styles, harmonies, instrumentations, and songs, as well as cowboy poetry, “Roundup on the Trail” features the same cast that entertained for the past 10 years in one of Branson’s most popular and unique Christmas shows, “Christmas on the Trail.” Performing in the Pavilion Theatre at Shepherd of the Hills, the show precedes the Shepherd of the Hills Drama. The show follows a chuckwagon dinner with a menu including: Texas brisket, maple-smoked turkey breast, campfire beans, Dutch-oven trail taters, fire roasted ears of corn, cookies, hot rolls, and cobbler.