You are here: Home / Blog / RV Travel Tales: St. Thomas Church—A Treasure in the Country
This post may contain affiliate links or mention our own products, please check out our disclosure policy here. 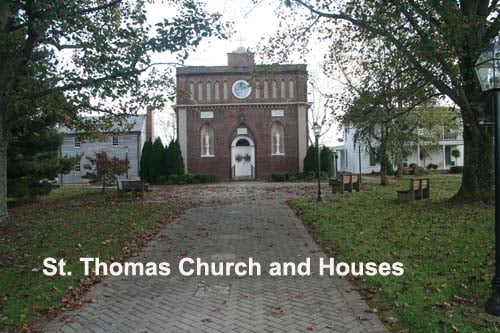 Often, the most memorable places in our travels are discovered by pure serendipity. We were making our last stop at a museum in Bardstown, Kentucky, when I mentioned to the doorkeeper a sign we had noticed for St. Thomas Church, but we could not see the church. Immediately, he said the church was about half a mile off the main highway. As we left Bardstown in late afternoon, we turned at the church sign and drove up a country lane that ended in front of a red brick church flanked by old trees. To one side, a two-story house stood; to the other, a white rambling one-level farmhouse with a long front porch. A timeline sidewalk with blocks inset into the bricks led to double church doors. From a red brick education center, a man called out that the church was unlocked and we were welcome to enter. What an idyllic, peaceful landscape! A postcard scene against a backdrop of farm fields edged with autumn tinged trees created images in our memory banks. With reverence, we walked into the church’s sanctuary, peeked into windows of the old house, and sensed the history of the centuries-old farm and the Catholic Parish that now worships in this place.

In researching the church’s history, I discovered that in 1634 a group of Catholic immigrants arrived in the present day state of Maryland after fleeing England due to religious persecution. They settled, farmed, and chartered religious organizations until 1785. Then, like so many folks of that day, they yearned to move on and homestead other lands. Some formed a group know as the “League of Sixty” and left Maryland in three groups. The last group, led by Edward Howard in 1787, settled in Bardstown, Kentucky. In 1794, Thomas Howard, son of Edward, set up a plantation of 109 acres about three miles out of Bardstown. He and his wife Ann managed to acquire close to 370 acres by 1807. In 1795, Thomas and Ann built the log house that stands today beside the church, originally a single

floor structure. Upon his death in late July 1810, Mr. Howard willed the structure, along with his acreage and $5,000, to the Catholic Church. Shortly thereafter, a second floor was added to the house, as well as outside clapboard siding and indoor paneling.

The agreement in the will was that the church received ownership of the land upon his death, but his wife was to remain and receive care until she remarried, and left the plantation to live with her new husband, or until she died. Also, the plantation would remain property of the Catholic Church forever, never to be sold.

In 1808, the diocese of Bardstown had been established by Pope Pius VII, two years before Thomas Howard’s death. This diocese was one of four carved from the original diocese of Baltimore; the other dioceses were Boston, Philadelphia, and New York. Benedict Joseph Flaget was named Bishop of Bardstown. He arrived in Kentucky in June, 1811. Bishop Flaget chose the Thomas Howard Plantation, already willed to the church, as the location for the rise of Catholicism in Bardstown and the building of St. Thomas Church and Seminary. He and Father David had already established the first seminary on the flat boat they used for travel to Kentucky. Once in Bardstown, Bishop Flaget set up the seminary in the log house built by the Howards. The St. Thomas Seminary was the first west of the Alleghenies. The log house was also Bishop Flaget’s residence for seven years and the founding site of the Sisters of Charity of Nazareth, established in 1812. The old log structure, now on the National Register of Historic Places, is the earliest building related to the Catholic faith still standing in the Midwest section of the United States.

Later, a larger brick seminary was built to accommodate more students. In 1819, the main seminary activities moved to St. Joseph’s Cathedral in downtown Bardstown, and the school on the old plantation became a preparatory seminary until 1869. No trace of the brick building remains.

The St. Thomas Church, built in 1816 by the seminarians and others, became a place for the growing community to worship. Bricks for the church building were formed and fired on site. Considered the “cradle of Catholicism in Kentucky,” St. Thomas Church served as the “diocese in center” until St. Joseph Cathedral was completed.

Today St. Thomas Parish serves over 460 families in a rural Kentucky community. Many of the families have ancestors who were original members of the church. Some of them may have worked to build the simple structure. Yet, St. Thomas goes beyond its membership to proclaim the Gospel, educate and foster children and adults, and serve those in need. St. Thomas is a unique place of pilgrimage and tourism in all of Catholic Kentucky. Their parish is vital and rich in the historical tradition of Kentucky Catholicism. Their members seek to live the joy of Easter with the courage of Pentecost. They pledge to make Christ more visible in their community and to make their parish a place that all who love God can call home.

As we walked in the twilight quietness around the buildings and basked in the beauty and serenity of Kentucky farmland, we felt God’s presence. And we felt at home. Our visit was unplanned; yet it was no coincidence that we were in that place at that time.