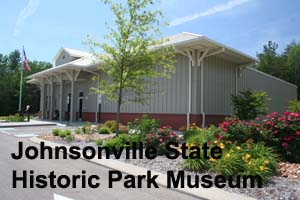 Wherever we travel, the stories stand out in my mind and imagination; stories about people and places, personalities and passions; stories about how folks lived and loved—and how their commitments and conflicts fit into the tapestry of the history upon which today’s world is built. When we chose to visit Tennessee’s Johnsonville State Historic Park, we did not know the back history of Johnsonville as a river port and a supply depot for the Union Army during the Civil War. However, a creative film and state-of-the-art exhibits in a new Visitor Center/Museum located on U.S. Highway 70 in Humphreys County, Tennessee, provided the historical background and significance of the Battle of Johnsonville.

Johnsonville State Historic Park is named for Tennessean Andrew Johnson, Union Military Governor during the Civil War and Seventeenth President of the United States. Although the park covers 2000 acres, little is left of the once bustling historic town site that existed from 1864-1944 prior to its flooding during the formation of Kentucky Lake on the Tennessee River. We discovered a concrete platform that likely was part of a wharf where boats on the Tennessee River unloaded both Union soldiers and supplies. In May 1964, the supply depot covered 90 acres in an operation that included docks, wharves, offices, warehouses, horse corrals, a saw mill, and military quarters for housing 2,500 men. For protection, Union soldiers, including many former slaves, constructed a small earthen fort called a redoubt. The single track Nashville and Northwestern Railroad, built primarily by two thousand African-American civilians pressed into labor by the Union Army, also served the new depot. On May 10, 1864, Military Governor Johnson rode the first train from Nashville to the Tennessee River and ceremoniously opened the supply depot.

Yet, on November 4, 1864, Confederate General Nathan Bedford Forest attacked Johnsonville from across the Tennessee River. Fearing capture, Johnsonville’s commandeer, Colonel Charles R. Thompson, ordered the burning of naval transports and gun boats docked at the wharf. The fire quickly spread and consumed most of the depot’s buildings, causing an estimated $6,700,000 in damages. After the battle, some of the depot was rebuilt, and a larger redoubt was constructed on a hill overlooking the lower earthen fort. Today, the locations of both redoubts are open for viewing and marked with signage. Original Union rifle pits are preserved throughout the park in various areas, leaving open the opportunity for one to imagine the men—and their thoughts—when they fitted themselves into those pits and returned fire to the Confederate Army.

Like all battles in the Civil War, grief filled from the loss of lives and debilitating injuries filled homes in both the North and the South. War changes lives, and quite often, drives people to anger and bitterness—and thus, to acts totally out of character. One such story—or some might say legend—about a prosperous plantation owner, John W. “Jack” Hinson, piqued my interest. As the legend goes, he had freed all his slaves and remained neutral at the outbreak of the Civil War. He was friendly with generals in both armies. However, after two of his sons were executed by Federal soldiers as suspected spies, their heads cut off and stuck on the gate posts to the Hinson Plantation, “Old Jack,” took up arms in a one-man war. He vowed to kill every man within range of his gun who wore a blue uniform. With his custom-made 50 caliber long-range 41-inch barrel Kentucky Long Rifle that weighed close to 18 pounds, he targeted Union soldiers more than a half-mile away on land, on transports, and on gunboats along the Tennessee and the Cumberland Rivers, killing as many as a hundred, according to one source. He marked his victims with notches on his gun. After Hinson’s death, the rifle was presented to Major Charles W. Anderson, General Forrest’s adjutant general. There were 36 clear-cut notches.

Living and planting his crops between the Tennessee and Cumberland Rivers, he knew every hill and valley, every trail, and spring in the region, making him a valuable guide for Nathan Bedford Forrest in his assault on the Union supply center at Johnsonville. When Hinson took vengeance against the deaths of his sons, he became an outcast from his home and his neighbors and an archenemy on the trail of those whom he held responsible for the murders of his boys. Despite a price on his head and the commitment of parties of four Union regiments to pursue him, Jack Hinson was never apprehended, He survived the war and the combat death of a third son who fought in an irregular armyband in the Between-the-Rivers region. He died in 1874 and is commemorated in a roadside marker in Kentucky. Hinson’s story has been told in two books by Tom McKenney; Battlefield Sniper: Over 100 Civil War Kills and Jack Hinson’s One Man War.

Johnsonville State Historic Park is a day-use park, offering hiking trails and picnic tables. Visitors may contact the park’s Welcome Center to schedule interpretive tours by calling (931) 535-2789. Each year on November 4th and 5th, the anniversary of the Battle of Johnsonville, a walking tour is provided free to the public by the park historian. The 1.5 hour tour includes an interpretive talk about the Battle of Johnsonville and leads visitors to various areas pertaining to the historic 1864 Civil War battle. Tours gather at 1:00 p.m. in the picnic area parking lot on November 4th and 5th. Due to the popularity of this event, early arrival is recommended. Additional living history events and hikes take place throughout the year.Johnsonville State Historic Park website http://www.tn.gov/environment/parks/Johnsonville/ offers a schedule.

Corrections:
* The picture titled Union Soldier is Confederate Artillery commander, Captain John Morton.
* The titled Old Wharf is the foundation of the post-Civil War railroad depot left from the Johnsonville town era, 1864-1944.
* The 2013 anniversary events will take place on November 2-3 (Saturday and Sunday). There will only be one tour on the following Monday, November 4th at 1 p.m.