You are here: Home / Blog / RV Travel Tales: The Museum of the Pacific War
This post may contain affiliate links or mention our own products, please check out our disclosure policy here. 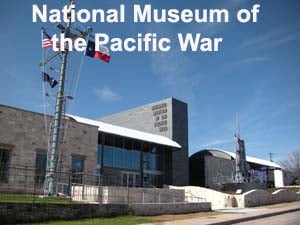 The men and women who fought and served in WWII have been called: “The Greatest Generation.” Their bravery and sacrifices are no less than those who fought in more recent wars—or in the Revolutionary and Civil War. The losses of sons, fathers, brothers, husbands, and friends equal the same for those left behind. However, we recently toured the National Museum of the Pacific War in Fredericksburg, Texas, and came away with a deeper understanding of the debt we owe the men and women and their families of the generation that served in WWII. For one thing, history classes had not taught me the vastness of this war—fought over two oceans and multiple continents. But then, I was only two when Japan bombed Pearl Harbor in a surprise attack on December 7, 1941, so perhaps, the history books I had in school had not been updated to cover this war.

Nevertheless, we discovered that a tour of the Museum is a humbling and inspiring experience, but also an educational one. The National Museum of the Pacific War is the only institution in the United States dedicated exclusively to telling the story of the Pacific and Asiatic Theaters in World War II. It was founded with the mission to honor the eight million Americans who served in the war against Japan and the more than 100,000 who gave their lives. The Museum honors those who sacrificed by passing on the stories of soldiers and sailors to future generations. While in the large facility, we watched several groups of school children on tour. We understood that for the past few years, the Museum has waived an entrance fee for school field trips. Perhaps, the numerous visuals, hands-on exhibits, and audio stories documented by over 6,000 veterans will educate and inspire them to work for global peace among nations.

At the beginning of the tour, exhibits trace the roots of the factors leading up to WWII, which was very helpful to me in understanding how nations such as China, Japan, and India had conflicts for centuries prior. A timeline overhead starts with the first exhibits and runs throughout the Museum, giving a perspective of how events unfolded

Although during WWII an alliance of 26 nations called the Allies stood against the Major Axis Powers: Nazi Germany, Japan, and Italy, the bombing of Pearl Harbor by Japan brought the war in the Pacific primarily home to America. That event proved America’s grit, but forever changed our country, and even our culture. A long list of names was permanently imprinted in the minds of all Americans: Pearl Harbor, Bataan, Corregidor, Midway, Guadalcanal, Tarawa, Leyte Gulf, the Burma Road, Iwo Jima, Okinawa, and Hiroshima. Young American men—and women—suddenly were thrust into battlefields on islands and in countries never before spoken in their vocabularies. The Museum addresses these locations in the new George H. W. Bush Gallery. Opened on December 7, 2009, the 33,000 square-foot state-of-the-art exhibition hall is a native limestone building. The new gallery focuses on the complex and inspirational story of America’s war in the Pacific and China-Burma-India Theaters.

Within the exhibit hall, 40 media installations, approximately 900 artifacts in 97 climate-controlled cases, 15 macro-artifacts, and hundreds of historic photographs are featured. Some photos are enlarged as backgrounds against full-sized artillery, tanks, a Jeep, and planes. Other pictures show the horrors of war and the sacrifices in lives, but also depict the bravery and determination of our men and women to bring America through the conflict and emerge as a stronger nation. In one alcove, a submarine is simulated. Visitors can walk in, getting the feeling of actually being in the submerged ship. Photos with text reveal the life of a sailor who served on one of those vessels. A reproduction of the atomic bomb that fell on the Japanese city of Hiroshima near the end of WWII centers one exhibit.

The Museum brings the human side of the war to the forefront with audio clips of veterans speaking about their experiences. Some run only a minute; others speak for up to five minutes. One audio exhibit documents the situations on the home front where women flooded into the factories to take over the jobs of their husbands, fathers, and brothers who fought in distant countries. Never before had wives and mothers worked on assembly lines manufacturing weapons, vehicles, and ammunition. The recordings told of rations on sugar, nylons, rubber tires, and personal automobiles, as well as the effect on their communities when dozens of men in small towns boarded buses to go off to war.

One particularly moving exhibit features the letter written by Mrs. Sullivan of Iowa, inquiring about the fate of her five sons who had requested to serve on the same ship. All five brothers were assigned to the U.S.S Juneau. All sons went down with the ship. Beside her typewritten letter, the reply from President Franklin Delano Roosevelt is displayed, a letter offering his sympathy and gratitude for the sacrifice of the five Sullivan sons. Before her sons were missing in action, Mrs. Sullivan had been asked to christen the ship the U.S.S. Tawasa in Portland, Oregon. President Roosevelt acknowledged her patriotism and courage in going ahead with that commitment in memory of her sons.

The Museum first originated in the Victorian Nimitz Steamboat Hotel where Fleet Admiral Chester Nimitz grew up in Fredericksburg under the tutelage of his grandfather. Now restored to its 1890’s appearance, the hotel houses the new Cailloux Education Center, event facilities, and a modern exhibition on the life and career of Admiral Nimitz. Anchoring a corner of a six-acre campus, the old hotel is one site in the overall National Museum of the Pacific War.

Other locations on the National Museum’s campus include thick native limestone walls enclosing a memorial courtyard with more than 2,000 commemorative plaques honoring individuals, units, and ships that served in the Pacific Theater. Families, friends, shipmates, and comrades in arms have provided the content of those plaques. The Memorial Courtyard stands as a unique testament to love, friendship, duty, and memories. Benches spaced here and there under shade trees provide a resting place for reflection, or even catching up with a friend or fellow-veteran. The courtyard is the site of public ceremonies on Memorial Day, Veterans Day, Pearl Harbor Day, and other events throughout the year.

At one end of the courtyard, ten granite monuments to the ten Presidents who served in World War II, either in the presidential office or in a military capacity, comprise the Plaza of the Presidents. The experience of these ten men in the war shaped their leadership of our country.

A classic Japanese garden, a gift of the people of Japan to honor Admiral Nimitz for his wise administration and his respect for the Japanese people and their culture in the post-war years, takes up one corner off the courtyard. The Japanese garden was our only disappointing aspect to the National Museum of the Pacific War. Perhaps because of the early spring timing of our visit, we found the garden not well maintained. Water features were not active.

The Pacific Combat Zone, an outdoor exhibit area and living history venue completed in 2001, is in the next block. An educational experience in visually imagining the harsh combat between the Allied and Japanese forces, the tour is led by an interpreter. The Pacific Combat Zone is the subject of next week’s blog post.