You are here: Home / Blog / RV Travel Tales: The Night the Earth Quaked and Changed the Madison Canyon
This post may contain affiliate links or mention our own products, please check out our disclosure policy here. 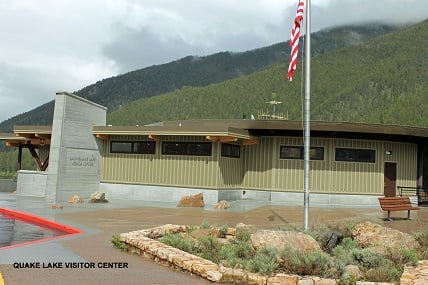 On a moonlit night, August 17, 1959, campers and fishermen slept in tents and small trailers along the Madison River below Hebgen Lake in Montana. Near midnight, the earth shifted and the most powerful earthquake ever recorded in the Rocky Mountains triggered an 80 million ton landslide of rock to suddenly crash into the Madison River Canyon. In a span of three to four seconds, the slide roared down the south flank of Sheep Mountain at an estimated 100 miles per hour. Rocks, mud, and debris blocked the Madison River, as well as the roadway going through the canyon—the only road for escape or for emergency responders to enter. The water of the Madison backed up behind the slide, forming a body of water later named Earthquake Lake. Hurricane force winds and a tsunami-sized wall of water suddenly swept through the campgrounds, trapping hundreds of unsuspecting vacationers. Some drowned. Others were buried in their sleeping bags under the massive rock pile. A few had mailed postcards from nearby Virginia City the day before, saying they were going to fish in the Madison River. Families never heard from them again. In all, 28 lives were officially recorded as lost, but some newspaper reports suggested the death toll went as high as 60.

During the earthquake, measuring between 7.3 and 7.5 on the Richter scale, the surrounding landscape dropped as much as 20 feet. Shockwaves caused instability in Hebgen Lake’s surface water, creating surges for 12 hours. Water pushed by the fluctuations poured over the 40-year-old concrete core and rock-filled dam, causing at least four cracks. But the structure held and repairs were later completed by the U.S. Army Corps of Engineers. Several aftershocks ranging from 5.8 to 6.3 were reported following the initial quake. Around Hebgen Lake’s shoreline, three sections of Highway 287 fell into the turbulent water, isolating survivors from medical help for hours. The lake itself “tilted,” rising eight feet in some parts. Waves crashing over the dam swept cabins and houses into the lake. Three hundred people trapped in the canyon were rescued, but their lives were forever changed.

Yellowstone National Park, 27 miles east of the devastation, is known for approximately 2,500 earthquakes annually. However, many are so small that they go undetected except for seismologists’ notations. The Hebgen Lake Earthquake, which also became known as the 1959 Yellowstone Earthquake, created new geysers and cracks spouting up over the park. Old Faithful Inn sustained damage, forcing guests to evacuate. Landslides caused by the quake blocked a road between Mammoth and Old Faithful, damaging a bridge inside the national park. However, the major changes in lives and landscapes occurred in a fraction of a minute in the Madison River Canyon and around Hebgen Lake.

Today, the small boats and canoes bobbing on the tranquil surface of both Quake and Hebgen Lakes belie the catastrophic incident back in 1959. Without a stop at the newly renovated Earthquake Lake Visitor Center, built atop the landslide, travelers through the Madison River Canyon would not understand the area’s geological and human significance of the 1959 earthquake. The Visitor Center is located in the Hebgen Lake Ranger District of the Custer/Gallatin National Forests. Inside the center, exhibits tell the story of the devastating night and its impact on the Madison River and the surrounding forests. Panels designed for flipping on a swinging arm tell numerous stories of people whose lives collided with nature within a few seconds: a family of seven swept away by the massive landslide; a couple sleeping in a trailer suddenly thrust into the cold water of Hebgen Lake, struggling to hang onto tree limbs in the dark of night; a car pitched into chaos when the roadway buckled; and survivors gathered on a knoll above the devastation, shivering in shock, not knowing when—or if–rescuers would arrive.

An observation room with wide curved windows overlooks the river of rock the earthquake left behind in the landslide. The Madison River, a silver ribbon winding around the base of the mountain and Earthquake Lake are viewed from the elevated room that projects from a ledge. Film presentations in the observation room interpret the earthquake and its consequence to the area. Trails from the Visitor Center lead to the Memorial Boulder and a plaque listing the names of men, women, and children who lost their lives in the earthquake. The trail continues to a lookout point to view Earthquake Lake in one direction and the valley that stretches beyond the canyon in the opposite direction. A Yellowstone Association Bookstore is located inside the Visitor Center.