You are here: Home / Blog / RV Travel Tales: The Past Lives On At Lake Village in Yellowstone National Park
This post may contain affiliate links or mention our own products, please check out our disclosure policy here. 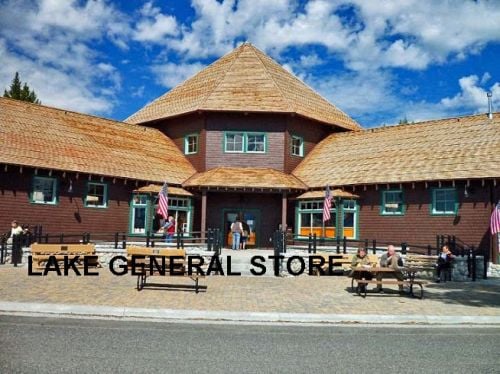 Lake Village in Yellowstone National Park is home to Lake Lodge and Lake Hotel, Yellowstone’s oldest operating hotel. Situated on Yellowstone Lake, one of the largest bodies of water in the Rocky Mountains, the gracious, rambling yellow clapboard building first opened to guests in 1891. By the 1970s, the historic lodging had fallen into disrepair, and in 1981, the National Park Service and park concessionaire, (then TW Services) Xanterra, partnered in a ten-year renovation to restore the hotel to its 1920’s image. One can imagine F. Scott Fitzgerald spending a vacation there.

The sunshine-colored exterior with white porticos evokes visions of the rich—men in brass-button blazers and straw boaters; women with coiffured hair, wearing filmy dresses and wide brimmed hats. In the early days, only the wealthy could travel to Yellowstone National Park and stay in such an elaborate accommodation. Today’s jeans and sandals do not alter the elegance of a pastel lobby furnished with comfortable settees and over-stuffed chairs in groupings for conversation. Pieces of a Thomas Moran puzzle spill over a coffee table. Families and friends gather for drinks before dinner in the lavishly furnished dining room. In contrast to Yellowstone’s wild outdoors framed in a bank of windows across the hotel’s lobby and dining room, a grand piano centers the room. A schedule of musical events, including a string quartet, is posted for certain evenings. At 5:30 each afternoon, the concierge hosts a historic tour of the grand old hotel.

On the day of our visit, we had met fellow Workampers, Scott and Valerie Anderson, for lunch at Lake Lodge, a rustic log lodge with a cafeteria. While enjoying lunch, we viewed lodge pole pines and a meadow skirting the lake through the dining room windows, some of the panes with original glass. Despite the summer day, rainfall brought cooler air and fires roared in two fireplaces in the lobby. People lounged in comfortable chairs in front of the fires, reading or napping. A wide front porch offered a row of old-fashioned rockers, comfortable for days when sunshine warmed the outdoors.

Inside the lobby, displays feature posters and information about early explorers and surveyors in Yellowstone National Park. One exhibit outlines the advent of the automobile. Many individuals declared that Yellowstone would never be the same. And automobile traffic did change the park’s ambiance, doing away with stagecoaches and steamships. With paved roads now forming a loop around the main attractions, cars, trucks, tour buses, and RVs often clog the traffic flow, especially if someone sights an animal. Vehicle doors open and passengers with camera in hand spill out to try and capture their own image of Yellowstone’s wildlife. However, the park was designated as “…a pleasure ground for the benefit and enjoyment of the people.” With the introduction of automobiles the number of visitors grew from 13,727 in 1904—the first year recreational visit statistics were kept—to the park’s highest visitation ever, 3.6 million guests in 2010. However, according to Al Nash, a Yellowstone National Park spokesman, the park has already recorded in 2014’s first six months a total of 1,084,827 visitors wit 669,642 coming into the park solely in the month of June. July is typically the park’s peak visitation month, followed in order by August, June, September, and May.

At Lake Lodge, accommodations are available in rustic cabins behind the main lodge building. The cabins lack the luxury of Lake Hotel, but are clean, comfortable and offer the experience of wildlife at their doorsteps. Never mind dodging buffalo chips on the outside lawn. The howl of coyotes on a moonlit night and the chirp of small birds in the mornings put one in tune with Yellowstone’s natural world.

Scott and Valerie are employees of concessionaire Delaware North at the Bridge Bay General Store on an inlet of Yellowstone Lake. They have worked at Lake Village for two seasons and graciously toured us to the historic Lake General Store, a quaint hexagon-shaped log building on the shoreline of Yellowstone Lake. The old building holds stories—and pictures—of steamships that once ferried visitors from stagecoaches across the lake to the hotel and lodge. Historic chandeliers hang from its peaked roof, casting an amber light across its beams. An old-fashioned soda fountain in one wing of the store the guests who sit on round red-covered stool with silver pedestals—straight out of earlier days.

We drove on to the smaller Bridge Bay General Store where Scott and Valerie spend their work days. They told stories about many of the boats moored in front of their store. They looked small, but people actually live on them during the summer. Valerie said in the evening those “boat people” come into the store, buy huckleberry ice cream sandwiches, and then sit in the big chairs out front to recount their day on the lake. At dark, they return to beds on their boats.

The Lake Queen, an excursion boat on Yellowstone Lake, departs on a regular schedule from Bridge Bay Marina. Scott related that in the early days of steamships transporting visitors across the huge lake, one captain had managed to bring the almost extinct buffalo back into the park and had located them on Sullivan’s Island in the lake. He asked his passengers if they would like to see a “zoo.” Of course, they would. He docked at the island and the passengers debarked. And then he charged each one 50 cents to get back on the ship. Park officials found out about his practice and banned him from the park. His ship was moored at that island, abandoned and deteriorating. Park rangers took a boiler off it to replace one in the lodge or the hotel. And the story goes that one night, the ship went up in smoke. Such are the historical stories around Lake Village.

Each of the other villages on the Loop Road: Canyon, Mammoth, Old Faithful, Tower-Roosevelt, and Grant, has their own stories and histories. However, Lake Village evokes memories of the Yellowstone that used to be. A friend read my comments about the Lake Lodge and remembered sitting around a campfire singing songs and listening to ranger-led programs. Her dad sat beside her and she said, “I felt happy—and so safe—listening to his singing voice.” Those are the memories of Yellowstone that begin in childhood and follow through to senior life.