You are here: Home / Blog / RV Travel Tales: Thinking About Mackinac Island
This post may contain affiliate links or mention our own products, please check out our disclosure policy here.

Lately, I’ve had images of Mackinac Island dancing in my head; scenes of the Grand Hotel’s 60-foot porch lined with rocking chairs, the lawn with colorful flowers and sculptured shrubs, even the sounds of clacking horses’ hooves as carriages moved along cobblestone streets. But wait! I’ve never been to Mackinac Island. Those are the vivid pictures transferred to my mind from my friend, Jo-Ann Carmack, who once worked a summer at the Grand Hotel. Mackinac Island is still on my “bucket list.” However, Jo-Ann’s descriptions made such an impression that I had to actually remind myself that I have not seen the Island and the Grand Hotel. 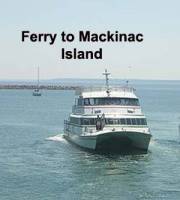 Jo-Ann and a fellow teacher applied for jobs on Mackinac Island, not actually knowing what kind of adventure awaited them. They were accepted as Social Hostesses in Admissions. Their pay was minimal and $12 a day was deducted for room and board—and not especially comfy accommodations, at that. But it did not matter. They wanted the experience, not the earnings. The twosome had to travel at their own expense to Michigan. After meeting all their connections by land, air, and water, they stepped off the ferry to the island in a pouring rain. No one greeted them, but from the dock, they saw the majestic old hotel. Jo-Ann admitted that the thought What am I doing here? raced through her mind. A dray, powered by two draft horses, pulled up to the rain-soaked women. The man and woman perched on the wagon seat motioned for them to pile their luggage onto the flatbed wagon and climb aboard.

“We noticed right away that we were being driven along streets winding to the back of the hotel where luggage and other supplies were delivered,” Jo-Ann shared with me. However, they heard shouts from inside, “The teachers are here!” They felt like celebrities, noting they were the only teachers among the workforce of college students and internationals. However, if their moment of celebrity beamed brightly, the light dimmed when they were shown to their living quarters on a downtown street of the island. On the opposite end of the spectrum from the 300 lavishly appointed rooms in the Grand Hotel, the teachers had a tiny space with bare walls, a sink, one small mirror, and two twin beds. A phone was noticeably missing. Jo-Ann stacked her luggage for a night stand. They shared a bath down the hall with young girls.

True. Dormitories with suites and laundry rooms are provided for workers—but only those who commit for the full season. Because of their teaching contracts, Jo-Ann and Judy McKnight could only work for two months. “After the shock of our sparse accommodations—and a good laugh—we determined that we were not there to loll in a luxurious room,” Jo-Ann said. “Our location was near the so-called downtown on the island. We found entertainment in the jazz clubs, at street dances, and along the docks. We felt safe and fell asleep each night to the clip-clop of horses pulling buggies down the street.”

The next morning, Jo-Ann and Judy settled into their jobs at the Grand Hotel. Because the Hotel regularly hosts celebrities, conferences, and conventions, they experienced excitement despite the nonstop schedule on workdays. Typically, their hours were 9:00 a.m. to 6: p.m., but frequently, they worked different days and different shifts. Primarily, their job duties entailed standing at an entrance either outside or in the middle of the hotel and checking the guests’ passbooks to see if they had actually paid for breakfast or dinner.

“Some visitors rode a carriage to the Grand Hotel from other hotels, so we had to ask if they were a guest of the Grand,” Jo-Ann explained. “If not, they were charged an admission fee to tour the Hotel and rock on the porch. Our jobs included handling money and tickets.”

The dining room of the Grand Hotel seats 1,000 guests. The buffet stretches the length of two football fields. On several occasions, Judy and Jo-Ann dressed and dined with guests, enjoying the live music by the Grand Hotel orchestra. The oldest summer hotel in the world, the Grand is considered a living, working museum, as rich in history as it is in atmosphere. The interior is extravagant with bright colors of summertime. Some rooms are named after America’s first ladies or presidents, or even movie stars.

Although the Grand Hotel is the crown jewel, Mackinac Island is considered the “all natural” theme park of America. Limited to transportation by horse and buggy, bicycle or foot, and surrounded by water, the Island sits in a Victorian time zone preserved and enhanced by only 500 permanent residents and dozens of summer residents who maintain bluff cottages in their original state. The downtown hustles and bustles with the feel of a 1800s Victorian village.

Designated as a Michigan State Park and honored by National Geographic as one of the ten finest state parks in America, visitors find natural beauty and historic sites to explore. Despite a limited season, Mackinac Island hosts two great events: the Annual Lilac Festival, June 7-16, 2013, and the Festival of the Horse, August 8-11, 2013. For those of us who prefer to stay in our RVs and take day trips, such as one to Mackinac Island, Mackinac City at the base of the Mackinac Bridge on the shores of the Straits of Mackinac is a perfect landing spot. Mackinac City itself is rich in history. Four historic Michigan state parks preserve Mackinac City’s heritage, while the area’s natural beauty rivals that of Mackinac Island. Besides the parks, Mackinac City offers sandy beaches, unique shopping, restaurants, golf courses, concerts in the park, and a free nightly Laser Light Show.RV parks are available in Mackinac City.

The whole state of Michigan is on my bucket list, but Mackinac City and Mackinac Island are close to the top of places to see when I visit.