You are here: Home / Blog / RV Travel Tales: Trumpeter Swans—Winter Visitors to My Hometown
This post may contain affiliate links or mention our own products, please check out our disclosure policy here. 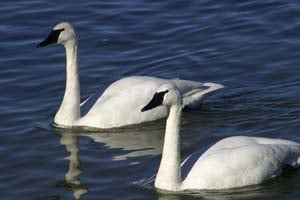 One hundred years ago, snowy white trumpeter swans with their average eight-foot wing span commonly migrated to Arkansas or so we are told by those who study birds. Commercial harvest of the birds for feathers, skins, and meat eliminated the swans from almost all of North America by the late 1800’s.

Today, they are rare winter visitors to Arkansas. In fact, in the 1960’s, the trumpeter swan was considered for the Federal Endangered Species list. About the same time, a nesting population of approximately 2,000 trumpeters was discovered in Alaska. The species was then taken off the consideration list. Yet, today, various states list the trumpeter as either state-threatened or state-endangered.

Nonetheless, in one of nature’s mysteries, three of the nation’s largest present-day species of waterfowl showed up in the early 1990’s on Magness Lake, a small oxbow body of water near Little Red River and my hometown of Heber Springs, Arkansas. Biologists believe a winter storm blew them off their migration course. No matter. They apparently liked the 20-acre lake surrounded by woodlands and cattle pastures. Former landowner Perry L. Linder noted the white-bright fowl on his property and started slinging kernels of corn for them to peck along the lakes shore. The following winter a Minnesota swan wearing a leg band visited the lake with her mate. In 1993, bird watchers spotted that same swan and her mate, plus three cygnets (baby swans). Since then, the numbers have fluctuated, but upwards of 150 swans have been spotted on the small lake at one time.

Linder studied the characteristics of the massive swans that gracefully sashay over the smooth water on his lake, their posture upright and their necks straight at all times. The majestic birds average about 26 pounds. However, the largest known male trumpeter attained a wingspan of 10 feet and a weight of 38 pounds. The swans share the water with ring-neck ducks, mallards, blue-wing teal, and Canada geese, as well as bald eagles and white-fronted geese. The trumpeter swans are distinctive in their white plumage, which indicates adulthood. Their offspring are as large in size, but wear mottled gray and brown feathers for their first year. The trumpeters wedge-shaped black beak, twice the length of a Canada gooses beak, often nips at other swans in a bid for a higher rung in the pecking order. Their legs are colored gray-pink, but in some birds can appear yellowish gray to even black. Trumpeter swans may form pairs and they bond for life as early as their second summer. Typically they do not breed until they are four to seven years old. Trumpeters migrate in family groups and prefer to feed on aquatic vegetation, seeds, and grains, as well as snails, insects and small fish. They also graze on grass in the cow pasture. And they gobble up the shelled corn thrown to them much like we humans indulge in regional food when we travel.

Local wildlife photographer, Larry Jernigan, notes that the swans recognize the sound of his truck and the sight of his bucket of corn, causing a flock of the winter visitors to swoop in for feeding. Like a farmer sowing seed, Brian Eason, now owner of the property, also flings handfuls of corn across the shoreline of the lake in regular feedings. Jernigan says hes never known a trumpeter swan to be overfed. After all, the snow white birds are on a winter holiday and who doesn’t overeat when on Thanksgiving and Christmas? Still, visitors are discouraged from feeding them bread that balls up in their throats and chokes them.

On a recent mild winter Sunday, Lee and I surveyed Magness Lake from behind the barrier fence erected in a bend of Hays Road to mark parking and an observation area. In 2004, Larry and Pat Eason purchased the farm to protect the land and wildlife from developers. The Easons founded E W Wildlife Refuge on the southwest area of the farm they call Heritage Farmworks. The refuge creates a safe home for deer, turkey and the seasonal stars, trumpeter swans. Following his dads death in 2007, Brian Eason decided to re-establish the land as a working agricultural operation, dedicated to sustainability, the preservation of endangered livestock breeds, conservation, and food excellence.

Through our camera lens, dozens, maybe hundreds of white swans glided on the lakes blue-green water. Looking to the opposite shore, black Angus munched on pasture grass while a bevy of swans apparently argued with honking as noisy as traffic jammed on New York City’s Times Square. As though the giant white birds made talking points, one and then another, rose upright, flapped snow-white wings wildly, and propelled their bodies rapidly a few feet across the water. Experts on bird behavior say that the trumpeter swans live in families that stick together as they paddle flawlessly or honk heatedly on the lake.

Up until now, the small Magness Lake has been large enough to accommodate the winter residents. However, water acreage versus swan population will reach its maximum. Eason says he hopes the flock will start splitting off and locating on other ponds and lakes in Cleburne County. An alliance of public and private organizations hope an experiment to re-introduce the trumpeter swans to an environment they inhabited prior to European settlement in America will help bring the massive birds back to other parts of Arkansas. Young trumpeter swans were released at Holla Bend National Wildlife Refuge along the Arkansas River, a few miles downstream from Dardanelle, and in the Boxley Valley area of the Buffalo River in north central Arkansas. The expectation, the hope is these immature swans will return to both areas in winter and, within a few years, bring their families.

Soon visitors to Arkansas may have more areas to view these creatures of the wild. In the meantime, visitors who want to see the swans can stop by Heber Springs in late November through the middle of February. Mid to late afternoon is the choice time for viewing the trumpeter swans on Magness Lake. Often in mid-day, they fly to other spots in the area to feed. But loud honking heralds their return overhead and the large fowl splash down in the waters they call home for the winter.

Directions: From Heber Springs, drive east on Arkansas Highway 110 from its intersection with Arkansas Highways 5 and 25. Go 3.9 miles from the intersection to Sovereign Grace Baptist Church, marked with a white sign. Turn left on the paved Hays Road.  Magness Lake is about a half-mile down this road. A gravel parking area is in the S curve. (Parking does not accommodate RVs. Please use your tow car for a visit.)