You are here: Home / Blog / RV Travel Tales: Visiting Norris Basin in Yellowstone
This post may contain affiliate links or mention our own products, please check out our disclosure policy here. 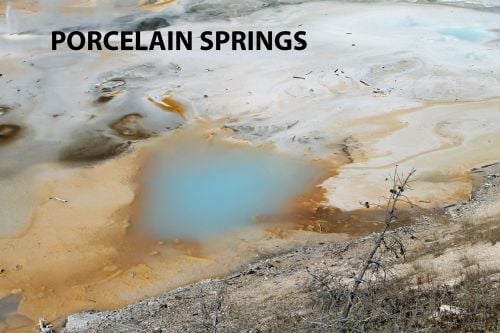 Norris is one of Yellowstone’s most popular geyser basins—so much so that parking spaces are often filled, especially in June, July, and August, the months of highest visitation to the national park. Named after an early Park Superintendent, Norris may be the hottest geyser basin in Yellowstone. A history of Norris Geyser Basin notes: The Carnegie Institute of Washington, D.C. made test wells in 1929 to determine subsurface temperatures. One test hole was abandoned at 265 feet when the temperature reached 401°F and the steam pressure threatened to destroy the drilling rig.

Following the trail from the parking lot to the basin, we first encountered Norris Museum, a log building, its architecture described as “National Park Service Rustic.” Built in1929 and 1930, the Norris Museum perches on a hill between the Porcelain Basin and the Back Basin, the two areas that comprise Norris. The trailside museum, which is listed on the National Register of Historic Places, is actually two rectangular sections separated by a breezeway that frames a view of Porcelain Basin—a perfect introduction for visitors arriving to Norris. Porcelain Basis is stark and barren, yet striking in beauty with pastel shades of blue, pink, red, yellow, and orange in the features. Porcelain aptly describes the landscape. Fine china comes to mind, especially when viewed from the terrace of Norris Museum. While overlooking Porcelain Basin, few likely think…acidic environment. Yet that is what stymies the growth of plants or vegetation, even algae and bacteria. Instead, information explains that the soft colors come from mineral oxides.

Some only gaze at the beauty of Porcelain Basin from the hillside above. However, boardwalks lead down to the very center of the basin. Visitors can stroll safely across Yellowstone’s hottest landscape. Numerous small geysers dot Porcelain Basin. Their activity is strong, but often short lived. Geysers can come and go in days. Even the larger more stable geysers change from year to year. Sometimes from day to day.

The Back Basin of Norris is a distinct contrast to Porcelain Basin. Unlike any other geyser basin in the park, Porcelain Basin stretches across a desolate valley. Back Basin’s boardwalks meander through a forest of lodgepole pine. Dozens of geysers, pools, and hot springs are visible in and around the trees, still in stages of re-growth after the devastating fires of 1988. The smell of fir and sulfur mix across the treetops, creating the unique fragrance of Yellowstone.

Many of Back Basin’s geysers have their own “personalities,” so to speak. Echinus has long been the only predictable geyser in the Norris Basin. However, in 1997 the geyser started to slow down. By 1999, bulletins in the Norris Museum described the geyser as relatively weak and erratic. Prior to the slowdown, Echinus often erupted to125 feet, although the average height was about 75 feet. And it erupted every 20 to 80 minutes, making it the most frequent of the predictable geysers in Yellowstone. People waited for its eruptions, knowing they would happen within a reasonable time. Another interesting fact about Echinus: its water is about as acidic as lemon juice. Today, one can check at the Norris Museum for posted predictions about Echinus.

Other geysers, such as the small swirling, puffing Whirligig Geyser, are fun. Its chugging sounds in the back vent during eruptions give the geyser a distinction—one that cannot help but bring a smile. Porkchop Geyser is one example of the ever changing state of thermal features. For a time before 1989, Porkchop Geyser, so named because of its shape, erupted continuously to about 30 feet. Then on September 5, 1989, the steam pressure rose and the geyser literally exploded. Rocks flew up to 220 feet away. Today, visitors can view the upended rocks around its crater. Porkchop is now a gently boiling pool.

While geysers are numerous in Back Basin, other features are pools, springs, and steam vents. Emerald Spring is a 27-foot deep pool that is constantly close to the boiling point. Its green color comes from the natural blue of the water combined with the yellow of the sulfur-coated pool.

Old Faithful, located in the Upper Geyser Basin, is Yellowstone’s trademark—likely the feature most identified in the park. Although over the years, the interval between its eruptions has stretched to approximately every 92 minutes; visitors can typically count on seeing a show of boiling water spouting 130 feet into the air. Yet, Steamboat Geyser in Norris Basin is the largest active geyser in the world. Steamboat’s eruptions can reach 380 feet and its steam phase can be heard miles away. However, one might pass many birthdays waiting for Steamboat to erupt. The last major eruption occurred on September 3, 2014. A list of eruptions since a major one in 1991 shows no pattern. Two eruptions occurred in 2002; three in 2003, one in 2005, and then none until July, 2013. Still, Steamboat is worth seeing, even in its dormancy. Minor displays of splashing occur and can reach ten to sixty feet. And one never knows—any day could be another major blow-out.