You are here: Home / Blog / RV Travel Tales: We Found Winter!
This post may contain affiliate links or mention our own products, please check out our disclosure policy here. 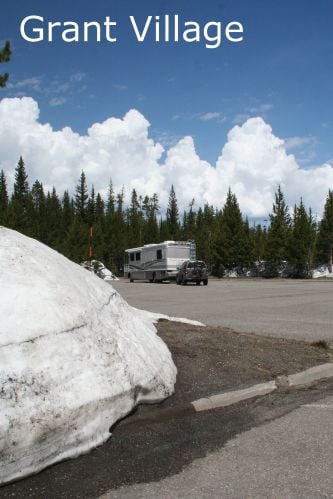 Lee and I escaped winter’s harsh hand in Arkansas when we spent over.two months in Arizona. While our family and friends slipped and slid on icy streets—and sometimes spent days confined to their homes—we ran around in short sleeves under Arizona’s warm sunshine. But in late May, traveling through Shoshone National Forest, parts of Bridger-Teton National Forest, Grand Teton and Yellowstone National Parks, we found old man winter! The roads were clear and Mother Nature had hung out her bright sun, warming the air. But banks of snow stood several feet high along Highway 287 climbing to 9, 745 feet at the Continental Divide in the national forest. Snowcapped peaks of the Tetons spiked the ridge in front of our motorhome windshield. Rushing rivers tumbled over rapids between rocky canyon walls. Thick ice covered the surfaces of Lewis and Yellowstone Lakes. Blankets of snowfall lay on the forest floor, a white carpet around the lodge pole pines. I felt surreal—to think only four days prior, my feet were mired in Mississippi mud—and on that gorgeous day, I passed through a white wonderland.

Shoshone National Forest is the first federally protected national forest in our country. Covering 2,500,000 acres in Wyoming, the land was originally part of the Yellowstone Timberland Reserve. Today, the forest is managed by the U.S. Forest Service, which was created by an act of Congress and signed into United States’ law by President Benjamin Harrison in 1891. I appreciate the vision and persistence of past leaders in preserving our national lands so that generations to come have the opportunity to observe how our country looked centuries ago. Native Americans have lived in this region for at least 10,000 years. When White Man first explored, several tribes called these mountains and forests their home. However, the area was never heavily settled or exploited, so when traveling through today we see primarily the same wilderness that tribes and white adventurers saw. Today, Shoshone National Forest is a part of the Greater Yellowstone Ecosystem, an expanse of federally protected lands encompassing an estimated 20,000,000 acres. Four wilderness areas within the forest protect more than half of the managed land area from development. When visiting any national park or forest, I always think “…what if?” Would condos, stores, and towns stand at the base of the Grand Tetons and along the fast-flowing rivers of Yellowstone if this natural wonderland had not been set aside? Would city water systems be tapped into the geysers and boiling springs to service human needs for energy?

However, because there were men and women with vision to see that these wild and beautiful lands should be preserved, Shoshone National Forest has virtually all the original animal and plant species that were there when white explorers such as John Colter and Jim Bridges first visited the region. The gurgling streams in the forest offer some of the best game species fishing opportunities in the United States. From sagebrush plains through dense spruce and fir forests rising to craggy mountain peaks, Shoshone National Forest holds a rich biodiversity rarely matched in any protected area.

Today, more than 1,300 miles of hiking trails, 32 campgrounds and adjacent forests and the parklands of Grand Teton and Yellowstone provide numerous recreational opportunities. On the day we found winter, it was ironic to see hikers in shorts and tee-shirts walking along the roadway with banked snow as a backdrop.

The Shoshone National Forest is home to the Grizzly bear, cougar, moose, tens of thousands of elk, as well as the largest herd of bighorn sheep in the United States. In passing on that snow-covered day, wildlife, mainly elk and buffalo, snuffled their noses beneath the snow to tear off tender shoots of green. As we approached parked cars along the side of a grassy spot where snow had melted, about a dozen people stood poised with long-lens cameras. Inching slowly by the cars, we spied a Mama Grizzly and two cubs. From my vantage point at the side window of our motorhome, I snapped a dozen photos. We were closer than others could get to the animals. Only when I put them on the computer screen did I know that all three bears had turned at the same time to look into my camera.

I had always wanted to see Yellowstone Country in winter and May made perfect sense. We saw wintertime’s beauty, but in air mild enough for hikers to be outside the motorhome in shirt sleeves.. After we entered Yellowstone National Park, we pulled into the parking lot of the General Store at Grant Village to make our lunch. Snow banks higher than our heads rimmed the vacant lot. The store was not open that early in the season. No matter. We had everything we needed inside our motorhome, plus a view from our table that no restaurant could provide. We found winter minus its cold bite.