You are here: Home / Blog / RV Travel Tales: Who Are Workampers?
This post may contain affiliate links or mention our own products, please check out our disclosure policy here. 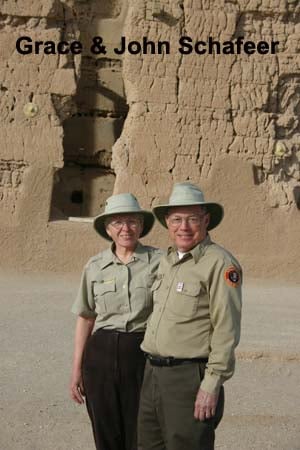 Workampers are doctors, lawyers, maybe candlestick makers and Indian Chiefs. They are teachers, businessmen and women, engineers, store clerks, chefs, mechanics, accountants, military officers, policemen, and truck drivers. In other words, Workampers come from every walk of life. Despite their diverse backgrounds, Workampers have one thing in common—wanderlust.

Over the past two and a half decades, I’ve met dozens—likely hundreds—of  Workampers, listened to their stories, and written my own accounts of where they have been—and where they are going. I first met architect Norm Denton on his third day of full-time RVing. His wife, Chris, had trained as a beautician, but switched to become a school bus driver as they planned their Workamping lifestyle. Today, Norm rides a lawn mower over the grounds at Grizzly RV Resort in West Yellowstone, Montana, while Chris traded her school bus wheel for a computer with a reservation program.

We met John and Grace Schafer as they volunteered at Casa Grande Ruins National Monument in Arizona. John, a retired instructor from the agriculture department at the University of Iowa, and Grace, a former elementary school educator, immersed themselves in the history and culture of the ancient people who once lived where their lodge is preserved. The Shafers made lively presentations to visitors.

Cliff Anderson, retired from the Minnesota State Pollution Control Agency, and his wife, upholster, Ruth Ann, met at a singles group in their church in Wisconsin. The allure of combining volunteerism with full-time RVing became the foundation of their romance and marriage.

South of the border in El Golfo, Mexico, we met Steve and Kathy Balliet who were working as activity directors at an American resort. Steve, a retired teacher, and Kathy, a former support staffer for children with special needs, used their people skills to transition into Workamping jobs.

Some folks like Bob and Suzan Petrulis use their former skills to start a business or land a job on the road. Bob, a restaurant owner, manager, or consultant for most of his career, put his expertise with commercial cooking to work. He personally designed the custom-built silver trailer that houses a state-of-the-art kitchen. Pulling their portable kitchen behind a motorhome, Bob and Suzan hung out their shingle for an on-the-road restaurant business they aptly named The Fry House.

In the ladies’ restroom at I-Hop in Lake Havasu, Arizona, I met Vicki Berry, retired from research and development at Cardinal Health Company. A conversation that began when Vicki commented on the rings on my fingers quickly revealed that she and her husband James, formerly in advertising for Gannett Publishing, were Workampers. The Berrys winter in Arizona, but come summer, they fly to the Kenai Peninsula in Alaska where they park a second fifth-wheel. James works as a bus driver for Princess Tours.

The people, the stories, and their possibilities for Workamping jobs or volunteer positions go on and on. I have filled the pages of two books, Road Work: The Ultimate RVing Adventure and Road Work II: An RVer’s Ultimate Income Resource Guide, with information about the lifestyle and the people who live it. Additionally, I’ve written hundreds of features for Workamper News and other RVing publications, putting the experiences of others into print. Lee and I have tried numerous Workamping roles ourselves. We’re still working—and seeking the stories of fellow RVers out on the road.