You are here: Home / Blog / RV Travel Tales: Why Workamp?
This post may contain affiliate links or mention our own products, please check out our disclosure policy here. 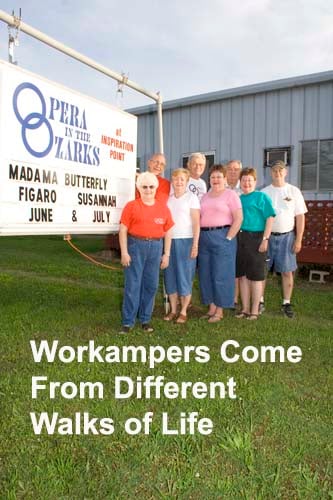 In record numbers, RVers are harnessing their adventuresome spirits to work on the road. Most are retired, but a number of singles and couples are taking early retirement or opting for more freedom with a new lifestyle. Some have lost jobs or been down-sized. They think, “Why not RV while I still have strength and good health?”

Some RVers work to support their wanderlust—to provide the extras. Others clock in a certain number of hours a week for their sites and hookups. Yet another group works long hours for salaries because Workamping is their livelihood. Linda and Larry Rhoten started full-timing knowing that they would have to work to maintain the lifestyle. We met them while working for amazon.com in Coffeyville, Kansas. Larry went from the U.S. Navy to a plant making aluminum cans in a very hot factory. He knew he could do the kind of work required at amazon.com.

“We have to have jobs that pay for all hours worked,” Larry says, noting that after being downsized in his company, Workamping is their paycheck. “Amazon jobs are hard work, but the company pays a good Workamping wage, plus our site and utilities. For us, the job was a means to an end. I went to amazon to work and I took any overtime they offered.” 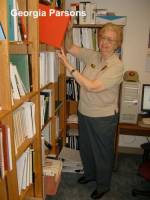 Many RVers like the idea of staying long enough in one place to thoroughly explore and sample the area’s culture. Working gives them a reason for staying—an identity in the community and workplace. Henk and Georgia Parsons liked that idea—except they devoted months, even years, to volunteerism with our National Park Service and the U.S. Army Corps of Engineers. One of their assignments as translators for the 1996 Summer Olympics in Atlanta, Georgia kept them on one Corps site for two years as they helped Olympic coordinators prepare for the events. They spent at least six years at Yosemite National Park in California, always contributing by developing programs and entering historical data into computers. In Florida, they wrote and presented a water safety program to the state’s school children. In almost two decades of full-time RVing and volunteerism, Henk and Georgia criss-crossed America, immersing themselves in local culture and history. They are still traveling the country, but in 2013, the Parsons decided to retire from volunteerism.

Indeed, a number of people retire with grand plans for leisure, but become bored when they have no reason to get up in the morning.  They look for productive roles. Some, like the Parsons and Ken and Patti Marsh choose the path of volunteering.

“We’re only willing to volunteer 24 hours weekly,” Ken said when we met them acting as interpreters at the Missions of San Antonio. He noted that they had broken their rule when they put in a long week building the façade of the house on the Battleship Texas near Houston. “If we work beyond those hours, it negates our purpose of retirement. We like volunteering for non-profits—federal and state parks, historic sites—because they need the help. We don’t need the income so we’d rather volunteer where there’s a need. It pays back where people come to enjoy the resources. It also gives us freedom. Although we honor our commitments, we do have the option of quitting if a situation is unpleasant. That has never happened, but we could walk away. Also, the commitments are shorter.”

Lee and I have chosen Workamping roles, both paid hourly jobs and volunteer assignments. Once we volunteered for a month on Oregon’s coast because it gave us time to explore the numerous beaches and lighthouses. Yet, by volunteering, we had a site and hookups—and an anchor to a certain area. Another time, we took a paying job for only six weeks in Bar Harbor, Maine. Since we were only there for the autumn weeks, we did not earn any profit, but the job helped pay our expenses to visit Acadia National Park and to watch New England’s leaves turn vibrant colors. On the other hand, our co-workers, Becky Schmidt and her husband had worked the whole season, so they had earnings to show for the hours they had worked.

On the road, there are hundreds of great people finding great jobs in great places. When I speak at a seminar or conference, I tell the participants that only Workampers get to “live” on some of America’s prime property. Certainly, most of us can spend a week or ten days in one of our federal or state parks, but time for regular campers is limited. By Workamping, one gets to park on beautiful property for an entire season—by a lake, close to the ocean, in a forest, or smack in the middle of a lonely desert, if isolation suits the Workamper. The same could be true for paying jobs for private companies or campgrounds. Louis Stoetzer and his wife, Judy Farrow, once traveled as tutors with Big Apple Circus. They parked in the middle of large cities and had opportunities to visit theaters, restaurants, and museums, places that typically are inconvenient to RVers.

By combining a paying job or a volunteer assignment with RV travel, those who choose the Workamping lifestyle offset travel expenses, earn money for extras, and enjoy the feeling of productivity by providing a service. Then there is the experience. By working two summers at Opera in the Ozarks near Eureka Springs, Arkansas, Lee and I had the opportunity to learn about opera and to meet and make friends with young adults aspiring for careers in opera houses. We received pay for our work, but we also experienced music that we had not known. Yes, RVers choose Workamping as a lifestyle for reasons as varied as their backgrounds. And along the way, they add new perspectives to their lives.