You are here: Home / Blog / RV Travel Tales: Yellowstone Lake
This post may contain affiliate links or mention our own products, please check out our disclosure policy here. 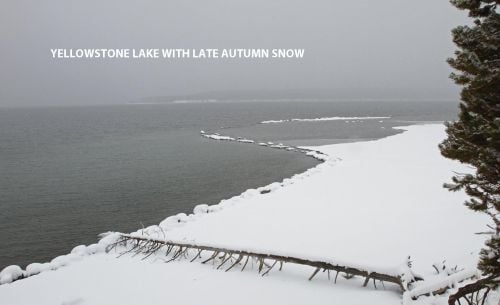 We entered Yellowstone National Park at the southern gate on May 25, 2014. Snow banked the roadway in walls half as high as our motorhome. We passed Lake Yellowstone, looking like the ice rink at Rockefeller Center in New York City—in an immense size, of course. In my head, I said: “That will not thaw all summer!” But, by early summer, the cold and deep waters reflected clouds overhead. In Visitor Centers in Yellowstone National Park, we learned facts about the largest lake in the park, indeed: the largest lake in North America at more than 7,000 feet elevation:

If Yellowstone Lake could be drained, one would see terrain similar to the rest of Yellowstone National Park—geysers, fumaroles, hot springs, spires, and deep canyons.

However, these numbers vary in written reports and articles on the Internet and in books, and even on signage in the Visitor Centers. Sometimes the depth of the lake or the miles of shoreline is reported differently even by the Park Rangers. But at 390 feet in depth—or 141 miles in shoreline—what do a few miles in variation matter? Yellowstone is a huge, deep, and awesome body of water at over 7,000 feet in elevation.

In mid-August, we took a ride on Lake Queen II to explore the lake. While the Park Ranger’s stories of its history and early exploration were entertaining, I discovered other versions in museums and even from the lips of different individuals who are savvy on the park’s history. Yet, the stories provide a rich tapestry of culture and nature woven together over thousands of years. Our Ranger on the Lake Queen II pointed out that rich natural resources drew people to Yellowstone Lake and its surrounding forests and mountains as long as 11,000 years ago. Those native people left their footprint of cultural history.

In the early 19th century, trapper and explorer John Colter, a member of the Lewis and Clark Expedition, was the first human of European descent to see the lake. He and two others trapped animals for furs in the area. Few believed their fantastic stories of boiling springs and hot spewing water. During the fur trading era of 1820-1840, Yellowstone Lake was probably visited by many trapping parties moving through the wilderness region. In 1827, the thermal features of West Thumb on the Yellowstone Lake were first described in the Philadelphia Gazette when a letter from trapper Daniel Potts to his brother in Pennsylvania was published. Forty-four years would pass before the first scientific expedition visited West Thumb.

One of the interesting stories about Yellowstone Lake involves a cone-shaped thermal feature on the shoreline in West Thumb Basin. Called Fishing Cone, the story goes that a member of the Washburn Expedition accidently dropped a trout off his line into the cone of boiling water. When he retrieved the fish, it was cooked. When visitors became more frequent to Yellowstone, it seemed everyone wanted to cook a fish. The practice is now illegal.

A year after the Washburn Expedition, the Hayden Geological Survey of 1871 explored the region of northwestern Wyoming that became Yellowstone National Park. Led by geologist Ferdinand Vandeveer Hayden, the 1871 survey was the first federally funded, geological survey to explore and further document features in the region. Their findings played a prominent role in convincing the U.S. Congress to pass the legislation creating the park.

On July 28, 1871 some members of the Hayden Survey party assembled a small boat from components they packed in from Fort Ellis. They carved oars from nearby trees. The boat, Annie, was the first known boat to sail on the waters of Yellowstone Lake. Annie was used by several members of the party to explore the islands and take soundings of the lake. Without sophisticated instruments, the surveyors who made their way around the shoreline of Yellowstone Lake estimated the circumference of the body of water within one mile of its actual measurement today.

James Stevenson and Henry Elliot rowed to an island about 1.5 miles offshore. Hayden named the island Stevenson Island. The island is central to a colorful story played out in the early 1900s. E.C. Waters, a manager of the large Lake Hotel on Yellowstone Lake’s shore, had an ambition as big as the 125-foot long steamship he had delivered to the Lake to ferry visitors from a stagecoach over the waters to the hotel. To boost his boat business—and perhaps, reduce the possibility of competition—he captured some animals and placed them on Dot Island, near to Stevenson Island. The animals, underfed on scraps from the hotel’s kitchen, grew scraggly and poor. Once Water’s passengers were aboard his vessel, he asked if they would like to see the zoo. Of course, they would! However, once they left his boat to go onto the island, he charged each one fifty-cents to board the steamship again. Needless to say, park administrators were unhappy with Waters and his business practices. In 1907, he was rendered “obnoxious” and banned from Yellowstone. Waters fought his removal from the park until 1909. The ship he claimed would hold 500 passengers remained moored to Stevenson Island. An ice storm broke the hull of the ship and the Lake’s wind, waves, ice, and snow continued to batter the abandoned vessel. By 1921, the ship was pushed onto the island’s beach. In 1926, the steam boiler that drove the engine was removed by park rangers and installed to heat the Lake Hotel. After 46 years of service, the old boiler was sold for scrap.

Winter skiers ventured across the frozen Yellowstone Lake and used the dilapidated ship as a warming hut. According to Yellowstone historian, Aubrey Haines, the E.C. Waters was also used as a prop for a fish-fry business, and as a retreat for brawls fueled with moonshine. Rangers, dispatched in the spring of 1930, to clean up the deserted boat, doused the bow in kerosene. According to another Yellowstone historian, Lee Whittlesey, they set fire to the old ship without authorization from their superiors. At least one of the rangers was transferred to the East Coast to serve out the rest of his career, reported by the Park Ranger on the Queen II, at the National Park Service managed Statue of Liberty.

A group of researchers spent several days in 1996 combing through the partially submerged blackened hulk. After documenting every damaged beam, plank, and scrap of its propulsion system, a few scraps were salvaged and removed. The ship’s anchor is on display at the park’s Bridge Bay Marina. Other pieces are in Yellowstone’s storage in Gardiner. The rest of the ship, its ribs awkwardly protruding from the island’s shore, remains at Stevenson Island. The researchers say it is the largest shipwreck at a high-elevation lake in all the national parks.

And so the history of Yellowstone Lake, the romance, the stories, and perhaps, even a tall tale or two, are still repeated and remembered. Imagination mixed with facts takes one back to the days when no buildings stood on the lake’s shoreline. A time when different men and women walked the land and created the history and the stories—a time that adds texture to the generations that follow.