You are here: Home / Blog / RV Travel Tales: Zoos Are For Kids—Any Age
This post may contain affiliate links or mention our own products, please check out our disclosure policy here. 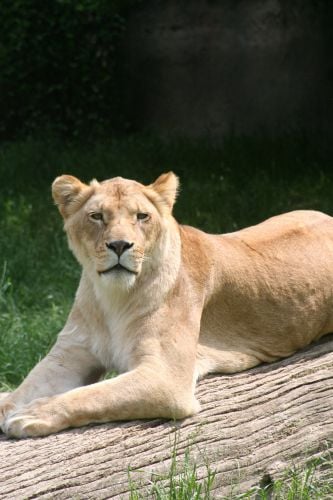 On a warm May Monday, Lee and I went to the Memphis Zoo. Dozens—maybe hundreds—of giggling, ziz-zagging school kids spilled from buses, forming bustling groups around teachers and a few parents. Recognizable to their particular classes by matching shirts—red, orange, yellow, green, and purple—wriggling lines at the entrance turned the plaza into a rainbow, a rainbow with happy sounds, no less.

Weaving in and among the excited children, we made our way to the China Theatre for a look at the Giant Pandas. Behind a glass smudged with prints of pint-sized noses and fingers, we watched one Panda lumber around her home before she lazily stretched out on her back. Before we moved on, she was munching on stalks of bamboo.

Strolling along the shaded sidewalks, we snapped photos of otters and primates and the big cats. One huge gorilla carried an armload of straw-like packing material from one side of his habitat to the other, a disgruntled expression on his face. We wondered what he was doing and why the packing material was strewn around their environment. To keep him busy moving it around?

t lunchtime, we returned to the Cat House Café (so-called because it once housed tigers and lions) and took a table next to the windows. Imagine our surprise when two white-cheeked gibbons flung their bodies onto the window sill. They peered at folks eating burgers and fries while children squealed and tapped on the windows. Every few moments, the gibbons swung back to the center of their yard, did a few acrobatics on a tall pole, and then returned to the window sills.

For those who prefer to take their own picnic lunch, a shaded park has tables and benches. Bronze sculptures of animals familiar to the Tetons line the perimeter of the picnic area.

In the afternoon, we toured the Teton Trek Exhibit, centered with a large three-story redwood lodge. Behind the lodge, a natural grassy area anchored with a waterfall is home to two grizzlies and several gray wolves. A bell tingled and an attendant appeared to toss food to the bears. When the bears returned to their naps, we wandered through totem poles and murals of Alaskan Native American symbols before seating ourselves in an amphitheatre for the sea lion feeding. The trainer explained how they use positive reinforcement to put the sea lions through exercises and tricks, not necessarily for a show, but to challenge the animals and keep them healthy. However, the sea lions entertained us, obeying every command for a morsel of food!

Next we went to the polar bear feeding. However, the big white bear did not choose to move from her nap. The exhibition area reveals the bear’s cold-water pond below the water level. When the bears swim—and there is a male companion who was cooling his fur in an air-conditioned cave not visible to the public, visitors can see the strength of their legs under the water. We have been fascinated by their movements on another date, but it did not happen on that particular Monday!

We walked along to watch two trainers put the elephants through their paces. They explained that their tricks on command are not for a circus atmosphere, but to keep the large animals exercised and familiar with human touch. One trainer noted that elephants must have their feet trimmed regularly. Teaching them to put each foot through a rectangle in a gate has a purpose. With each obeyed command, the elephant received a bit of food. And they did perform on command.

We moved on to view the warm water penguins at their scheduled feeding. The trainer noted that the birds wore different colored beads on their wings to denote which ones needed certain supplements with the food. The birds dived for the fish the trainer threw, and a few simply stood at her knee and accepted her hand feedings. We noted the obvious affection each trainer has for his or her charge. They called the animals by name, as though they were beloved children. Each trainer imparted information about the particular species, and noted the health care that the animals receive on a daily basis.

We exited the zoo by the savanna that is home to majestic-looking lions. One female surveyed those observing her as gracefully as Simba’s mother, Sarabi, in The Lion King. The male, perhaps Mufaso, napped in the cool of a rock backdrop.

A day at the zoo is a pleasant—and educational—outing. And the space is welcoming to kids of all ages.