You are here: Home / Blog / RV Traveling Tales: A Repurposed Bridge Joining Two Cities and a Trail
This post may contain affiliate links or mention our own products, please check out our disclosure policy here. 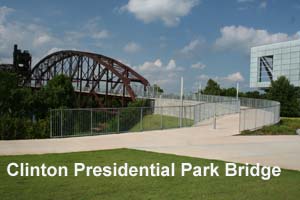 For decades, six bridges have connected the city of Little Rock, Arkansas, with its neighbor, North Little Rock, on the opposite shore of the Arkansas River. These bridges accommodate motorized vehicles and trains. Another set of bridges is under design to connect the parks along the Arkansas River and give people the opportunity to hike or bicycle from the Clinton Presidential Center to Pinnacle Mountain State Park and the Ouachita Trail. Four of those bridges are open: Two Rivers Bridge, Big Dam Bridge, The Junction Bridge, and Clinton Presidential Park Bridge. Of the Arkansas River Trail pedestrian bridges, the Two Rivers Bridge and the Big Dam Bridge were constructed from their piers up. The other pedestrian bridges on the Arkansas River Trail are re-purposed railway bridges.

On a summer afternoon, Lee and I hiked across the 1,614 feet of the Clinton Presidential Park Bridge, also known as the Rock Island Bridge, built in 1899 for the Choctaw and Memphis Railroad. The old Choctaw Station, a restored building in the Presidential Park, currently houses the Clinton School for Public Service, the Clinton Public Policy Institute, and the Clinton Foundation. The renovation of the Rock Island Bridge was seven years in the making, and recently opened in October 2011 for cyclists, joggers, or those who simply want to stroll across the Arkansas River. On our afternoon walk, a gentle breeze ruffled flowers in boxes anchored to the bridge railings. Late afternoon sunlight sparkled on the wide Arkansas rolling under the bridge. A muskrat and her babies played in the shallows closest to the Clinton Presidential Center, 13 acres of undisturbed land forming the Bill Clark Wetland Park. Pedestrian trails and elevated walkways in the park pass interpretive displays. 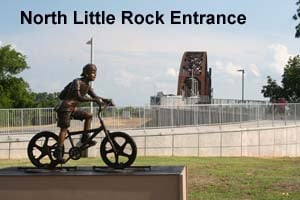 The bridge’s Little Rock entrance is in the Clinton Presidential Park at 1200 President Clinton Avenue. The North Little Rock entrance, marked by a sculpture of a boy on his bicycle, is at Ferry Street near a residential neighborhood. The connection across the Arkansas River allows pedestrians access to attractions on both sides of the river including Heifer International, Verizon Arena, Dickey Stephens Park, the River Market and the Argenta Arts District. Downtown Riverside RV Park sits on the North Little Rock shore, accommodating rigs of all sizes. On the North Little Rock side, the historic Argenta district and Verizon Arena are each a short walk from the bridge’s entrance ramp. North Little Rock plans to renovate the area, which also has access to the River Trail, a 15 mile loop of continuous trail. All River Trail bridges are open 24 hours a day and seven days a week, unless otherwise announced. The bridges are pet and cyclist friendly. 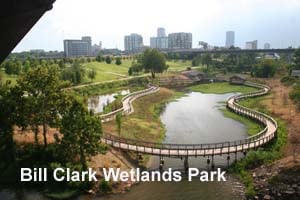 Little Rock has much to offer the RVer, whether one makes only an overnight stop off of I-30, or stays for a few days to take in the numerous historic sites and other attractions. While Downtown Riverside RV Park is easily accessed at Exit 141B off Interstate 30 at Riverfront Drive and South Locust Street, U.S. Army Corps of Engineers Park, Maumelle, on the banks of the Arkansas River, is only ten minutes from downtown Little Rock. Access to Maumelle Park is off of I-430.

For information about Maumelle Park go to: http://www.recreation.gov/campgroundDetails.do?contractCode=NRSO&parkId=71932