You are here: Home / Top Stories / Plan RV Vacations Around Astronomy for Stellar Memories
This post may contain affiliate links or mention our own products, please check out our disclosure policy here.

by Rene Agredano
August 11, 2016August 10, 2016Filed under:
Table of Contents show
Enjoy the Perseids Outburst
Get the Most Out of the Perseids (and Remaining 2016 Meteor Showers)
Two More Chances to Plan 2016 RV Vacations Around Astronomy Events
October 7: The Draconids
November 4 – November 5: the South Taurids

This year’s Perseid Meteor Shower is one of the best reasons why it pays off to plan your RV vacations around astronomy events.  Listen closely to the night sky this week and you might hear cries of “Oooh!” and “Aaah!” echoing across the nation as the Perseid Meteor Shower dazzles campers on August 11 and 12. 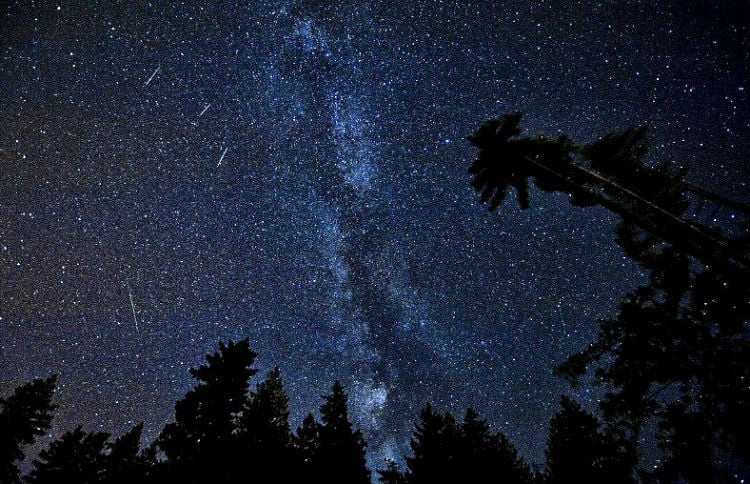 Milky Way with Perseids Meteors. To find more astronomy events to enjoy scroll to the bottom of the page. Image: Pixelby.com, Craig Letourneau

From California’s Whiskeytown National Recreation Area to Voyageurs National Park in Minnesota and beyond, campers are getting ready for the Perseid Meteor Shower. This predictable annual event happens every year between mid-July and late August. Late at night and into the morning, stargazers are dazzled by up to 80 meteors per hour blazing across the sky and this year, the show will be especially stunning.

“They will be in ‘outburst’ in 2016, which means they’ll appear at double the usual rates,” NASA meteor expert Bill Cooke explained to Space.com. Cooke says we could see anywhere between 150 and 200 meteors per hour this year, a level of intensity that hasn’t occurred in 20 years.

The Perseid meteor shower kicks-off when earth begins its annual passage through Comet Swift-Tuttle. Peak activity flares up midway through the journey (generally around August 12) and just like clockwork, the meteors begin their brilliant freefall into the atmosphere at 37 miles per second. The harmless spaceballs burn up 50 miles above the planet and create a dazzling show for the naked eye.

We’ll see an “outburst” this year because earth’s path through Comet Swift-Tuttle is extremely crowded with space dust. Jupiter’s gravity causes these billions of microscopic particles to bottleneck in front of the earth’s path, generating more meteors than usual for our enjoyment.

Camping in a dark, remote area is the ideal way to experience any meteor shower but especially the Perseids. That’s because even those of us without astronomy equipment can enjoy the show. All you need is a good eye and patience.

If you miss this week’s brightest action, you’ll still be able to enjoy the show right up through Sunday August 14. After that, the upcoming full moon will obscure the end of annual showers.

The Perseid Meteor Shower is the biggest annual meteor shower but it’s not the only one. After August you can still plan two more great RV vacations around astronomy events:

If you’re not a late night person, the Draconids are for you because peak activity begins at nightfall. With just a few meteors falling in the northern sky every hour, experts call it a “sleeper” meteor shower that originates at the head of the constellation Draco the Dragon.

South Taurids meteor shower is ideal for early morning risers. Grab your coffee during the pre-dawn hours of November 5th and catch peak activity of the South Taurids. Known for their exceptionally bright fireballs, this meteor shower will dazzle you with fewer but more intense meteors right up until sunrise.

If you can`t get enough of great RV vacations around astronomy events check out our article, Enjoy an Astronomy Star Party with RV Camping.