You are here: Home / Top Stories / RVing Amid Castles and Canals
This post may contain affiliate links or mention our own products, please check out our disclosure policy here.

The GPS navigation system on our motorhome calculated its options from some 500,000 roads and found the route from England to Toulouse, France, before defaulting to a blank screen. It required resetting in Toulouse as we set out to travel through the most productive wine country in France.

On a previous trip, we toured the Languedoc-Roussillon region by boat on the Canal du Midi. This time we would crisscross the canal in a VW T5 panel van converted to a motorhome by Danbury. The camper van model was named the Surf, which turned out to be apt when we paddled in the Mediterranean some 14 days and 900 miles later.

The Languedoc-Roussillon region stretches across a broad arc in the south of France from Toulouse to Sète on the Mediterranean coast. There are 700,000 acres under vines, making it the single biggest wine-producing region in the world. With Roman antiquities, aqueducts, amphitheatres, spectacular castles and hilltop fortresses, it’s a fascinating region to explore.

The area’s passion for organic, locally grown food can be seen in the markets in villages all over and in picturesque market towns, with their slow pace and sun-bleached squares.

We stayed at an RV park on the Limoges side of Toulouse. It was on the outskirts and in the least desirable part of the town, but close to the Canal du Midi and there was a free shuttle bus to the local Metro station, which was just 20 minutes from the city center.

Toulouse, nicknamed La Ville Rose, is a city of warm pink brickwork, and is famous for indigo and violets. We started with a visit to Maison de Violette, situated in a barge on the Canal du Midi, where the tradition is kept alive for growing the city’s famous double violets and for making delicate soaps, perfumes, teas and chocolates.

Our lunch was at Les Beaux Arts Brasserie, overlooking the River Garonne and with distant views of the snow-capped Pyrenees. Here we had one of our best meals and sampled the famous Toulouse sausage.

After lunch we picked up a copy of the “Discovery Itinerary” from the tourist office and walked one of the five historical routes, taking us to a variety of interesting and unexpected places with a labyrinth of streets and alleys.

The famous Victor Hugo Food Market, in central Toulouse, was our must-see stop the next day. The selection and quality of food is beyond question, from spicy Toulouse sausage to local produce and a vast range of fish from the Atlantic Ocean and the Mediterranean Sea. Good first-floor restaurants here serve ultra-fresh produce
Unwisely we were tempted to try and find parking in Toulouse. This is practically impossible, especially with any type of motorhome, so a second day at the campsite was the answer.

Following the Canal
With cheese, sausages and bread loaded, we set the GPS system for the hour’s drive to Castelnaudary via the quiet canal side roads. The Canal du Midi was now our constant thread on the start of our gastro-cum-cultural-cum-Francophile discovery trip. 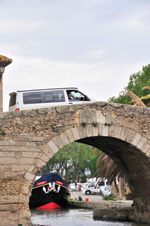 The canal, which was commissioned by the Sun King, Louis XIV, in the 1600s, has been important historically as part of a transportation link connecting the Atlantic and the Mediterranean. It is also a World Heritage Site, valued both as a feat of civil engineering and a work of art. Beginning in Toulouse and extending for 150 miles, it is built on a grand scale, with oval-shaped locks and 42,000 plane trees, planted to stabilize the banks and provide a cooling canopy for boatmen. The canal has wide towpaths for bicycles. The adjacent tarmac roads meander along, frequently crossing stone-arched bridges to reach villages.

Castelnaudary serves as a base for the French Foreign Legion and is the home of the cassoulet, a rib-sticking traditional dish of the Aude department of southwest France with ingredients of haricot beans, confit duck and pork sausages. The tourist office has produced a “Route du Cassoulet,” a 112-mile tour that crisscrosses the Canal du Midi while taking you to meet bean, duck and pig farmers, potters and wine makers.  We dropped into a haricot farm to see where the beans are nurtured and graded, and then went to a pottery where cassoles (cassoulet dishes) are made. Started in 1830, the Poterie Not is reputedly the oldest pottery in France still hand-throwing pots. Philippe Not and his two sons are delighted when visitors cram into their workshop to see the great selection of cassoles and other dishes.

Our next stop was at Camping de la Cité, where was camped next to a spectacular fortress in historic Carcasonne. We strolled down a lane beside the campsite and dined within the medieval walls at Brasserie Le Donjon.

To learn more of the Languedoc wines, we met Stephanie Delmotte in her wine bar, Comptoir des Vins et Terroirs, in the center of the castle. She stocks 150 wines from unusual and small vineyards. After tasting the wine, we walked back to our campsite instead of driving, mindful of the very strict French drunk driving laws that include a requirement that all vehicles carry a breathalyzer kit so drivers can make sure they are under the legal limit for alcohol.

From the 11th to the 13th centuries, this region was a stronghold of Occitan Cathars a Christian religious movement and an irritant to the nation’s Catholics.  Today you can visit the Cathar fortresses on rugged hilltops.

The remains of the four Cathar castles of Lastours are at the end of a dramatic gorge. Following a climb, we reached the lookout with panoramic views. Feeling hungry we called into L’Auberge du Diable au Thym, a small bistro attached to a one-star Michelin restaurant. We thoroughly enjoyed a good lunch, choosing from a menu that offered three courses for 15 to 20 euros. We realized we were in a remote area when we saw wild boar on the menu.

Then, we visited Chateau Villerambert-Julien, where we met Michel Julien, whose vineyards cover 190 acres and date back to the 13th century.  The winery produces white, rose and four red wines, mainly from Syrah and Grenache grapes.  Unusually, some of his land contains marble (the estate supplied marble for the Paris Opera House), and the soil is poor, which leads to a smaller grape but one with intense flavor. Wine tastings are held in the summer, and Julien is happy to find one or two places for motorhomes among the vineyards after the tastings.  Prior booking is essential for an overnight stay. 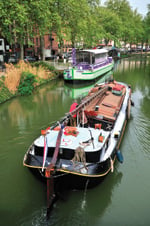 We drove to the Auberge de l’Arbousier at Homps, overlooking the canal, and discovered the aperitif of the area, a sweet muscat. To see what the canal was all about, we took a two- hour leisurely paced boat trip through dappled light from the avenue of trees, with the scent of thyme wafting from the riverbanks.

We visited the 17th century Chateau de Paraza, where canal builder  Pierre-Paul Riquet lived while watching canal construction work from his window. Then it was on to Le Somail, a village that offered good motorhome parking beside the canal. We stocked up from the grocery barge and browsed around the unique second-hand and antique bookstore, Le Trouve Tout du Livre, with 50,000 books, and found a hat museum! We followed this with a short drive to the co-operative of L’Oulibo at Bize Minervois, where we learned everything about olives and had an hour’s tour and tasting. The olive and grape share the same climate and soil.

A meander along the canal roads led us to Ecluse Fonserannes, a staircase of eight locks that allows boats to be raised 21.5 meters, and then on to the spectacular Orb aqueduct, where the canal crosses the River Orb at Beziers. Both are impressive feats of engineering.

We enjoyed our first moules et frites (mussels and chips) with two large beers at a campsite eatery along the canal at Villeneuve-Les-Beziers, as we finally reached the sea. The canal parallels the coast to Sète, exiting at Étang de Thau in Marseillan in front of the factory where Noilly Prat, the popular French aperitif, is produced.

Journey’s end and we ate in the hot sun on Sète’s quayside, ordering Noilly Prat and delicious fresh fish that had been landed just four meters away.

Food is paramount in France and taken very seriously. We didn’t do as much cooking as usual in our motorhome and returned home with cupboards full of provisions. But we had done what the French do—enjoy!

Gary Blake and Wendy Johnson are photographers and writers who live in Reading, England.