You are here: Home / Top Stories / RVing at the London Olympics
This post may contain affiliate links or mention our own products, please check out our disclosure policy here.

On London streets, iconic vehicles include jaunty red double-decker buses and black taxis. For the Summer Olympics in 2012, you can add another unique means of transportation on the city’s roadways—RVs.

Recreation Vehicles provide an alternative way for savvy travelers to save money while attending the Summer Games, July 27 through August 12 next year, or the Paralympics, August 29 to September 9. Although most people don’t think about staying in an RV near Westminster Abbey and Buckingham Palace, a number of attractive RV parks are located around London. More facilities await in Weymouth (setting for the sailing competitions) and Eton Dorney (host for the rowing events near Windsor). From any of these parks, RVers can hop on public transportation to venues for the 2012 Games.

“We still have plenty of availability for the Olympic period,” said Nick Roach of Just go Motorhome Hire, which claims to be the largest motorhome and campervan rental company in the U.K.

Prime RV sites are convenient and available, according to Jon Dale, public relations manager for The Camping and Caravanning Club based in Britain. The organization offers four parks within easy reach of London and the Olympic Stadium. “People coming from the U.S. for the Games want an alternative to staying in a bed & breakfast or a hotel,” Dale said.  “Hotels can be more than $400 a night. It’s $50 to $70 a night for our sites.”

The club aims to tap into the Olympic spirit. “At our campgrounds we’re looking to create mini Olympic Villages,” Dale explained. “There will be lots of nationalities on site and many ways for people to enjoy themselves,” including big-screen TVs broadcasting the events.

Just like the variation in pronunciation between toe-MAY-toe and toe-MAH-toe, RVs come with a different “accent” in England. First, RVs translate as “motorhomes”—motorized vehicles holding sleeping, cooking and bathroom facilities. A “caravan” means a trailer that contains beds and cooking equipment that can be pulled by a car. RV parks are known as “caravan parks” or “holiday parks,” and a campsite is called a “pitch.” Instead of renting a vehicle, you hire it. Driving is on the left, the steering wheel is on the right, and traffic circles, called “roundabouts,” often substitute for traffic lights.

Most motorhomes in the U.K. are smaller than their stateside counterparts (although some U.S. models exist). However, smaller often proves better on British roads, which tend to be narrow with petite parking spaces. “The mileage is a plus compared with American RVs—25 to 27miles per gallon,” points out Janet Groen, who wrote Living Aboard Your RV and blogs at SoloWomanRV.blogspot.com.

Smaller means that everything is miniaturized—often including beds and bathrooms. If you’re especially big or tall, ask for measurements. Groen also points out that while a vehicle may sleep six, it doesn’t always accommodate six. “In some six-sleeper RVs, there’s only room at the dining table for four,” she notes. “Also ask how people are slept. For example, if you have a teenage daughter and son, they won’t want to share a double bed.”

She adds, “Most people want to fill every bed to save a little money. Keep in mind that you not only go to sleep—you have to get up, get dressed, stow gear, cook meals, and play cards inside on a rainy day. Quarters can get very, very close.” Also check age restrictions: several motorhome rental companies in the U.K. require renters to be over the age of 25 and under 75.

Just go Motorhome rents vehicles ranging in length from 21 feet to 24 feet, many with features such as Xbox 360, flat-screen TVs, reversing sensors, GPS, separate shower and toilet, microwaves, and more. For the Olympics, it hires out vehicles ranging from two berths to seven berths; prices range from $215 to $300 per day for a minimum 14-day hire. 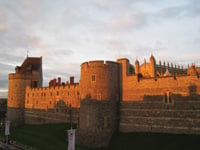 Navigating roundabouts combined with driving on the left side can be tricky. “You’re going around and around figuring out how and where to get out,” recounts Groen. In addition, English road signs generally point to the next small village (which might not appear on your maps) rather than your metropolitan destination. So while you may be heading for someplace big—even really big like London—the signs might ask you to choose between Tolpuddle and Milborne St. Andrew. For ease of navigation, consider adding a GPS to your rental.

Other points to consider when hiring an RV for the London Olympics:
• Some motorhome rental companies have packages that transport travelers from the major airports to their facilities so you can fly in and go right to your RV.
• Most rental companies offer a bedding package that includes sheets and towels so you don’t have to bring your own and incur excess airline luggage fees.
• In London, July weather can range from days of dreary, 60-degree rain to steamy temperatures in the 90s. Opt for a vehicle with air conditioning.
• Some rental companies offer discounts if you pay the full amount in advance instead of just a deposit. If you go this route, protect your payment with travel insurance in case you have to cancel your trip.
• If you plan to take your RV onto the European Continent before or after the Games, verify that your rental contract allows it.

Multiple Venues
Although billed as “The London Olympics,” the 2012 Summer Games will take place at more than 30 venues in and around the capital. Here’s a rundown.

London. Ever since London won the bid to host the 2012 Summer Olympics, the city has been gearing up to host a socko event. But last year the gala five rings were upstaged by images of the riots that flared on TVs and computer screens around the world. Fortunately, the Olympic venues were not affected by the unrest. With customary steadfastness and resilience, the Brits are now turning full attention to preparations for the Games. Many Olympic facilities are already completed—under budget and ahead of schedule. That means that during the coming months, visitors can preview the arenas and stadiums where the world’s best will compete for gold next summer.

While the April wedding of Prince William and Kate Middleton symbolized heritage—“something old”—, the Olympics represent “something new”—the redevelopment of London’s East End. Formerly a derelict district of wharves and warehouses, the area is the site for the 80,000-seat Olympic Stadium, nine other sports venues, and the main Olympic Village. London’s professional Blue Badge Guides lead tours to viewing points of 2012 venues—but not into the actual sites. (See tourguides2012.co.uk.)

While the Olympic Stadium is new, London will also use hallowed grounds for events, including Wembley, England’s national stadium and second-largest arena in Europe. For the first time in more than a century, the Olympic tennis competitions will be held on grass—namely noble turf at Wimbledon. Even if you’re not a top seed, you can visit Centre Court, the press interview room and museum on public tours. 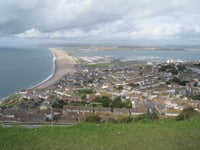 Weymouth. Setting for the sailing competitions, Weymouth has slumbered since the 18th century when King George III “took the waters” there in a none-too-successful attempt to cure his madness. Grand Georgian facades arc along the town’s three-mile Esplanade dotted with palm trees. Weymouth and Portland National Sailing Academy will serve as the racing center.

Beyond the racing venues, this area of Dorset and East Devon (a three-hour train ride from London) resonates with old-world charm. Weymouth sits on England’s 95-mile Jurassic Coast, an area rife with fossils and dinosaur footprints and England’s only Natural World Heritage Site. Other attractions include the 16th-century Portland Castle (built by King Henry VIII) and the 14th-century Abbotsbury Swannery, where visitors help “swanherds” toss grain to a feathered throng of mute swans.

Windsor. Built by William the Conqueror after the Norman invasion of 1066, Windsor Castle is the longest occupied citadel in Europe. It remains a favorite domicile for Queen Elizabeth II, who often enjoys weekends there; the 85-year-old monarch still hacks out (horseback rides) in Windsor Great Park. Near Windsor Castle along the Thames River is the Eton Dorney Rowing Centre, which will host the rowing competitions. Visitors can stroll the 450 acres of parklands and learn the sport at evening learn-to-scull sessions offered from April to October (dorneylake.co.uk).

At the 2012 Olympics, the marathon route—placed entirely in London—will wind past Buckingham Palace, St. Paul’s Cathedral, Tower Hill, and the Houses of Parliament. The Games will inspire a new look at England’s landmarks: historic icons as seen through an Olympics lens. And those landmarks will also be viewed through the windshield of an RV by some adventurous and fortunate travelers.

Peter Schroeder and Risa Wyatt are writers and photographers based in Seattle.

RV Parks and Sites
Founded in 1901, The Camping and Caravanning Club is one of the world’s oldest and largest groups dedicated to all forms of camping. It provides more than 4,000 campsites across the UK and worldwide. Members get discounts, advance bookings, and other perks at sites. Visitors from the U.S. can get a temporary membership for $30.20 plus $6.05 postage (2012camping.co.uk).

More information about campsites near London is available from VisitLondon, the official guide to the city at visitlondon.com/category/accommodation/caravan-and-camping. For information about Weymouth/Portland, see visitweymouth.co.uk; and for Windsor, see windsor.gov.uk