You are here: Home / Top Stories / RVing with Kayaks
This post may contain affiliate links or mention our own products, please check out our disclosure policy here. 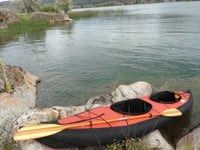 When my wife and I bought an RV a few years ago, we wanted to combine camper explorations with kayaking, a sport we enjoyed doing together. But we always had to reluctantly leave our boats behind because I couldn’t figure out a convenient way to bring them along. This is the story of how I managed to solve this dilemma. The lessons I learned along the way may prove helpful to other would-be RV/boaters.

We bought a custom 20-foot camper, and at first I didn’t know how difficult it would be to carry a traditional rigid kayak, which can be 20 feet long and a couple of feet wide, and weigh between 50 and 100 pounds. After a few trips in the rig, however, I realized the roof of the RV was too high (at nine feet) to store boats up there, and I didn’t want the added problem of towing a trailer.

After studying several options, I decided to find a vessel that could fit easily either inside the camper or in one of the large outside storage compartments. Several boats fit this requirement, but I was a little dubious about how well they would paddle compared to my rigid boats. 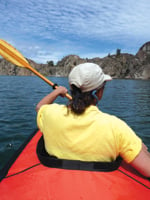 An inflatable kayak was one option. My only experience with them had been a decade ago, when a friend and I paddled together in the San Juan Islands. I was in a 16-foot fiberglass boat, while my friend paddled an inexpensive inflatable that had a flat and bulbous hull shape. When the pull of the current increased, my boat, with its sleek, streamlined hull, was able to cut through it with ease. But my friend started to panic when he realized that, despite paddling furiously, he was being pulled backwards, away from land. Only by taking a longer, diagonal course through the current could he make any headway, because the force of the water pushed against his hull and made the boat difficult to control.

The inflatable boats I tested, however, didn’t have this problem. They had a more streamlined, fish-like shape that made them easy to maneuver in both currents and wind. The Innova Swing II had the most traditional sea kayak feel. At just over 13 feet long, it had plenty of room for two paddlers plus a couple of medium-size dry bags, enough for a day’s outing. It featured a fabric deck to prevent water from splashing into the boat, supported by three aluminum crossbars that gave the deck a peaked shape, allowing water to drain off. Optional spray skirts completely seal paddlers in, a great benefit on cool or stormy days, or when the water is cold. 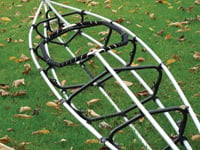 My wife and I were able to maintain a steady 3 mph cruising speed without much effort, thanks to a hull design that plied the water deftly, its tracking aided by a detachable skeg. I was surprised by how simple it was to inflate: just 10 minutes of hand pumping. At only 26 pounds, the Swing II was light enough to carry by myself, something I’m always leery of doing with a fiberglass kayak, whose tonnage is hard to manage solo without fear of rupturing discs. At the end of an outing in the boat, we’d unscrew the inflation valves, wait for the air to empty, and fold the boat up. Its packed size of 26x16x10 inches was perfect for fitting in one of the RV’s several big exterior compartments. 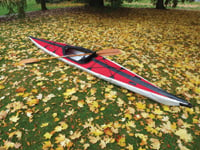 Innova is made in the Czech Republic, with its U.S. distributor located in Burlington, Washington. The company has a reputation for making rugged, high quality boats that are PVC-free. Another kayak in its line is a single called the Safari. It too is light and folds up compactly, though constructed of a heavier (and more durable) material than the Swing II. It is designed for use in rivers, with dozens of small holes perforating the bottom that automatically drain away water that gets into the boat, something that often happens on a fast river. There is no decking, so it’s more canoe than kayak. Highly maneuverable in tight spaces, it is more of a fun boat to play with in rivers and ocean surf, rather than tour. It is difficult to keep tracking straight, plus has the disadvantage of water entering the cockpit through the drainage holes, keeping your posterior permanently wet, which is fine for sunny summer days and warm water, but not so good if it’s cold or you want to stay dry.

Hard to Tip Over
Another manufacturer that offers a line of well-crafted inflatables is Sea Eagle. The model I paddled was called a Fast Track. The name is appropriate. Unlike the kind of inflatable that got my friend in trouble in the San Juans, this one has a sleek, low-resistance hull that glides smoothly through the water with little effort, and a built-in keel that keeps it tracking true. Also unlike most inflatables, this one was incredibly stable, almost untippable. In fact, thanks to a separate rigid inflatable floor, I could even stand up in it and use it like a stand up paddleboard. This feature came in handy when we tied up to a buoy in the middle of a warm lake last summer. We ate lunch, and then slipped over the side for a swim. Getting back into the boat was a breeze. The boat would make an excellent snorkeling platform. And when the wind came up, we unfurled the optional sail and off we went, sprinting downwind faster than two people could paddle.

For paddlers who prefer a more rigid kayak, one that mimics the performance of a traditional fiberglass boat, you might consider another category of easily transportable boats, called folding boats. The one I paddled was a U.S.-made Folbot Cooper. Its 16-foot, 6-inch metal frame snapped together easily without tools, covered by a durable vinyl “skin” with zippers that provide access to the bow and stern. For added stability, two inflatable air chambers run along both sides of the boat. 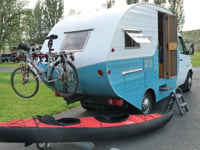 The Cooper carved through the water more efficiently than any of the inflatables, due to its narrower and longer hull, and the tough skin was able to withstand the barnacles of beach landings, which I thought initially might be a problem. The only drawback for RVers is that, though the boat breaks down into a compact 41x18x9-inch storage bag, it takes about 20 to 30 minutes to build or disassemble. If you’re going to be someplace for a few days, that’s OK, but if you’re just dipping in and out of the water in a single day, and then driving to a new destination, an inflatable is probably a better choice.

Any way you slice it, having a boat along on an RV trip adds another dimension of fun and exploration. At one big lake in Eastern Washington, all the RVs, campers and fishermen were clustered on the western shore, where the road ended. We blew up a tandem kayak, paddled for 20 minutes to the east side of the lake, and discovered that this was where most of the wildlife hung out—the hawks, ravens and leaping trout. They preferred the peace, quiet and solitude there. And so did we.

Scott McCredie is a journalist and RVer who lives in Seattle.