You are here: Home / Top Stories / RVing With the Ghosts of Tumco
This post may contain affiliate links or mention our own products, please check out our disclosure policy here. 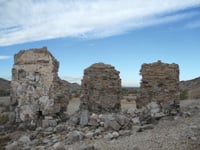 Next time you find yourself RVing through the Southern Californian desert on your way to or from Yuma, stop by and visit the ghost town of Tumco. It’s an interesting stop and RV friendly too.

Tumco is the remains of a gold mining town and is also one of the earliest known gold mining areas in California, preceding the California Gold Rush by 150 years! Gold was first discovered by Spanish colonists as they traveled northward from Sonora, Mexico. According to local legend, two young Mexican boys returned to their camp one evening with their shirts stuffed with gold ore. These muchachos cargados (loaded boys) became the namesake for the surrounding Cargo Muchacho Mountains, where the Tumco gold deposits occur.

Following the first discovery of gold, Mexican settlers worked numerous small mines for many years. Gold was “rediscovered” here January 6, 1884, by Peter Walters and the rush was on. Soon a town that was then called Hedges sprang up to support the miners. Some of the mining claims assayed as high as 7.5 ounces of gold a ton, an extremely rich find. But with the nearest mill to process the ore 14 miles away, the transportation costs were too much for the average grubstake miner to make a profit. 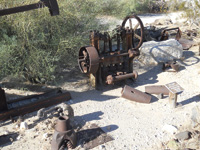 In 1893, a group of California investors decided to take a chance on the mines and formed the Golden Cross Mining and Milling Company. They possessed the capital to develop the mines and build a mill. To operate the mill, a 12-mile wood pipeline was built to pump over 100,000 gallons of water per day from the Colorado River. Additional expenses were incurred shipping mine timbers via the nearby railroad from northern Arizona.

At this point in time the town had a population of more than 3,000. Golden Cross was soon facing financial trouble since the ore didn’t bring the high yield expected and they couldn’t make a profit operating the 40-stamp mill they had constructed. Inept management decided that a straightforward solution would be to add another 60 stamps. However, with a 100-stamp mill capacity capable of crushing 167 tons of ore per day, the problems became worse. It was now necessary to mine some very low-grade ore to keep all 100 stamps going, and the company slid further into debt. In an effort to postpone the inevitable, the firm began cyanide leaching of the thousands of tons of tailings that had amassed around the mines over the years. Within the next two years the company was bankrupt and a receiver was assigned to liquidate the holdings.

Hedges was largely abandoned by 1905 when mining was discontinued. In 1910, the mines were reopened and the town reoccupied under the name Tumco, short for Trumble United Mines Company. Tumco was a typical company town of its day, with workers essentially at the mercy of the mining company. Workers were required to purchase goods at the company store and even though the company did not supply housing, $1 per day to live on company property was taken from their wages. Wages at the mine were $2 to $3.50 per day. Historical accounts of the town speak of wealthy eastern investors, ruthless swindlers and an assortment of colorful characters.

This newest attempt to make a profit from the mines again led to financial ruin in 1914. Tumco never regained its former glory and has been completely abandoned since 1949. Ultimately, over 200,000 ounces of gold were taken from the mines in the area.

The Bureau of Land Management has developed a self-guided 1.5-mile walking tour of the historic Tumco site. The trail passes through the residential, business and mining areas. Nine interpretive panels detail the life and times of the town.

Your walk through history will take you past the remains of two cemeteries, the company store, hospital, house ruins, miners’ club, cyanide vats and other related mining features.

RVing history buffs will want to begin their Tumco experience at the nearby Gold Rock Ranch, where the owners are happy to share their knowledge of local history. The ranch features a free mini museum with an assortment of pictures, artifacts and memorabilia from Hedges, Tumco and the surrounding areas.

IF YOU GO:
Take exit 159 off Interstate 8, 12 miles west of Yuma. Head north on Ogilby Road approximately eight miles to coordinates 32 52.964N 114 50.351W, where you will see a sign on the east side of the road for Gold Rock Ranch. Turn west to reach Gold Rock Ranch in less than a mile or turn east and travel a couple hundred yards to reach Tumco. Both options are via dirt roads suitable for two-wheel drive RVs.

Best time to visit is fall, winter or spring as summer temperatures can reach 120 degrees.

There are acres of free camping between Ogilby Road and the Tumco town site on Bureau of Land Management land. There are some great campsites to be had with fire rings and other improvements made by previous campers. The view of the Cargo Muchacho Mountains cannot be beat and the sunrises and sunsets are spectacular! Dispersed camping is allowed at the site for up to 14 days.

If you need hookups, head over to the Gold Rock Ranch where full hookup RV spaces are available along with other services. The web address is goldrockranch.us.