You are here: Home / Top Stories / RVs for Veterans Donations Provide Shelter, Stability
This post may contain affiliate links or mention our own products, please check out our disclosure policy here.

by Rene Agredano
March 8, 2016March 8, 2016Filed under:
Table of Contents show
A Gift of Shelter and Stability

Tonight when you call it a day and turn out the lights, an estimated 48,000 homeless military veterans will sleep on the street. According to official government counts, the homeless vet population in our country is a growing and complex problem that has yet to be solved. The good news is that if you have an unused RV in good condition, you can be a part of the solution. 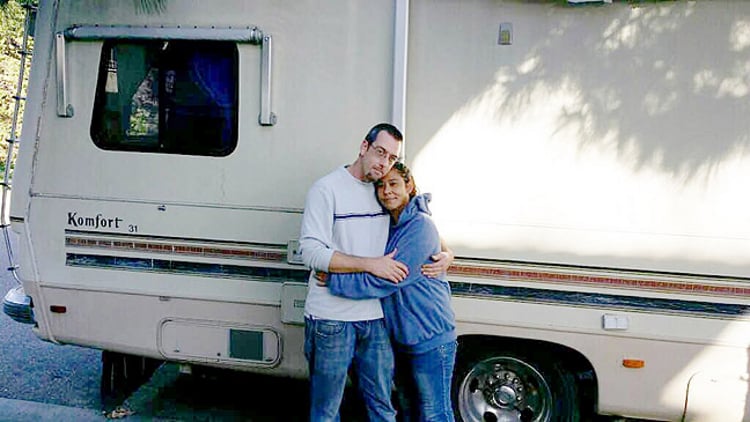 A Gift of Shelter and Stability

In Central California, the non-profit organization RVs for Veterans is serving as an important stepping stone for homeless vets seeking reliable shelter of their own. For the last four years the group has been quietly connecting veterans with private owners of unused motor homes, fifth wheels and trailers who want to gift the RV to a great cause. From the group’s headquarters in Paso Robles, RVs for Veterans operates as a project of the homeless advocacy group Paso Cares which demonstrates that solving the homeless veteran problem begins with a single act of generosity.

“Many of the RV owners are veterans themselves, or have family members who are,” says president Cherie Michaelson. On a rainy day from her busy home office in Paso Robles, she explained that since RVs for Veterans started in 2013 the group has donated 47 RVs to homeless veterans and there are more on the waiting list. Every day she receives contact from individuals seeking shelter, or veterans services organizations with clients in need.

Michaelson doesn’t act as a social worker and there are no probing questions asked about the recipient. All a veteran needs to do in order to qualify for a RV is provide Form DD214, which is proof that they’ve been discharged from the military. Whether they left honorably or dishonorably, are single or married, with kids or without, she doesn’t make it her business to judge their situation. Her single goal is to get a roof over that veteran’s head. Most recently Michelson was frantically looking for a RV that would house a homeless, pregnant veteran who days away from giving birth to her child.

“It’s an easy thing to do, but it takes a lot of time,” Michelson explained. With a small board and a dedicated, small group of volunteers, RVs for Veterans does the legwork to connect the donor with the recipient. To expedite the process, the transaction is kept as simple as possible: there is no money exchanged, just a transfer of ownership on the vehicle title. Many RV owners will go the extra mile to accompany the veteran to the department of motor vehicles to transfer the registration. Donors will often take time to show the veteran how the RV’s house systems and mechanics work, ensuring that the new owner has a safe, reliable home on wheels.

Motor homes are always in high demand. “Lots of people want motor homes, they want to be mobile,” she says. “They don’t always have a truck for a trailer.” RVs for Veterans volunteers always do their best to inspect a donated RV before it goes into the program. Many of the donated RVs are in good shape but Michaelson says the group has the burden of weeding out the acceptable ones from the dilapidated, uninhabitable RVs that some people just don’t want to pay to get rid of.

Whenever she gets a call from a donor, she listens attentively when an owner discusses the RV they want to donate. When she hears a potential red flag describing any issues the RV might have, Michelson stops and makes it clear to the caller that the program is not a free way to dump an old, beat up RV.

Word is quickly spreading about the program and the group is getting busier by the day as Michaelson fields calls from all over the west. With more people hearing about the good work RVs for Veterans is doing, many like-minded people are asking how they can start a similar program in their own regions. Michaelson says she’s always happy to share what RVs for Veterans has learned with anyone who wants to give it a try.