You are here: Home / Top Stories / Rynobus RV is a Party on Wheels
This post may contain affiliate links or mention our own products, please check out our disclosure policy here.

The Rynobus RV proves that you just never know what you can do with an old school bus. What was once a road tripper’s beloved skooklie is now an eye-popping metal art car and social lounge with the fastest deployable mobile performance platform ever constructed. 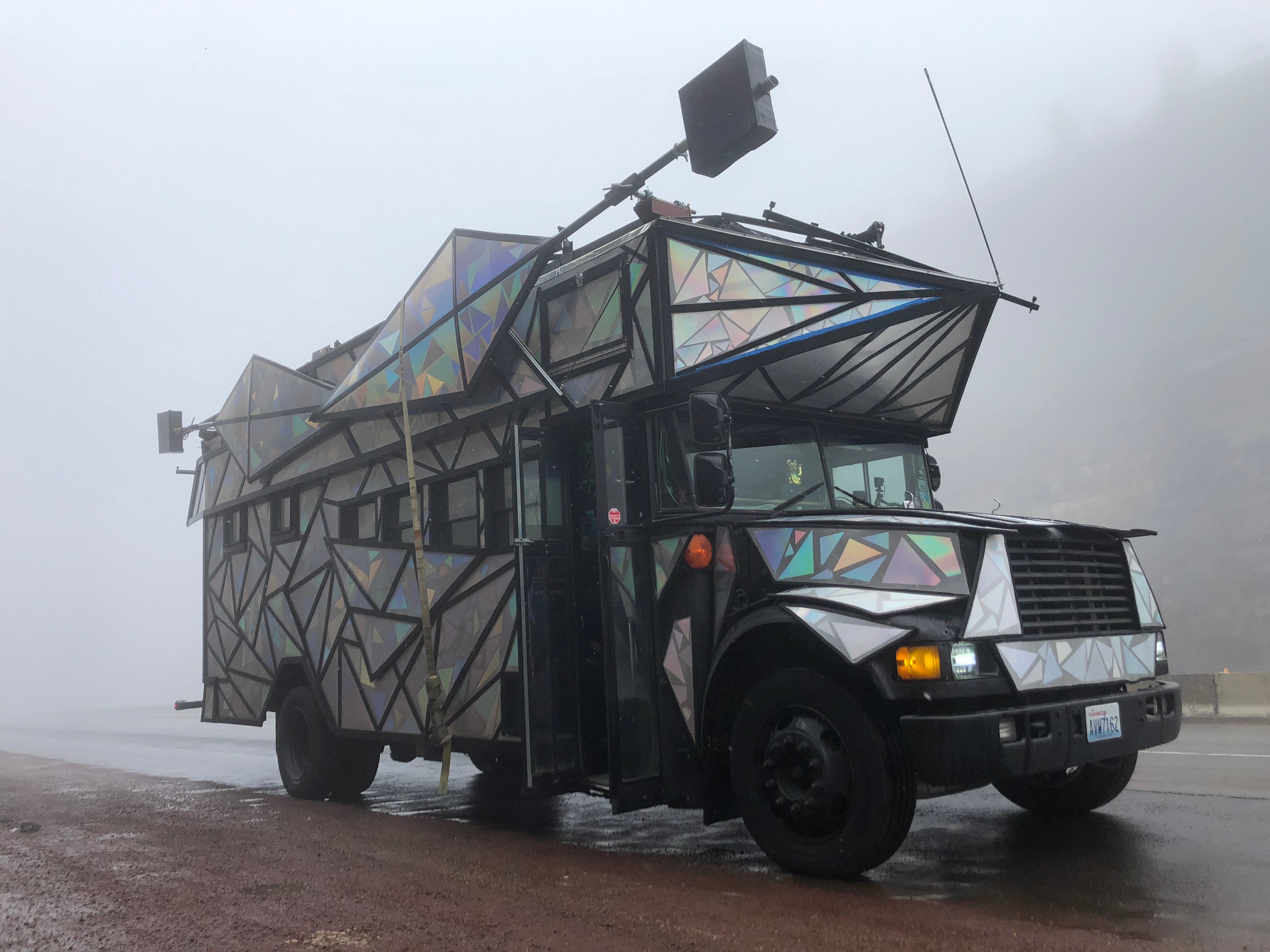 The Rynobus is totally road worthy.

It all started when a Seattle diesel mechanic listed his beloved Skoolie conversion for sale on Craig’s List. The International Bluebird School Bus was already a home on wheels. Now, all it needed was a dedicated owner to give it a second life. John and Jack Lipke were up to that challenge, and transformed the skoolie into an instantly recognizable, show-stopping art car. 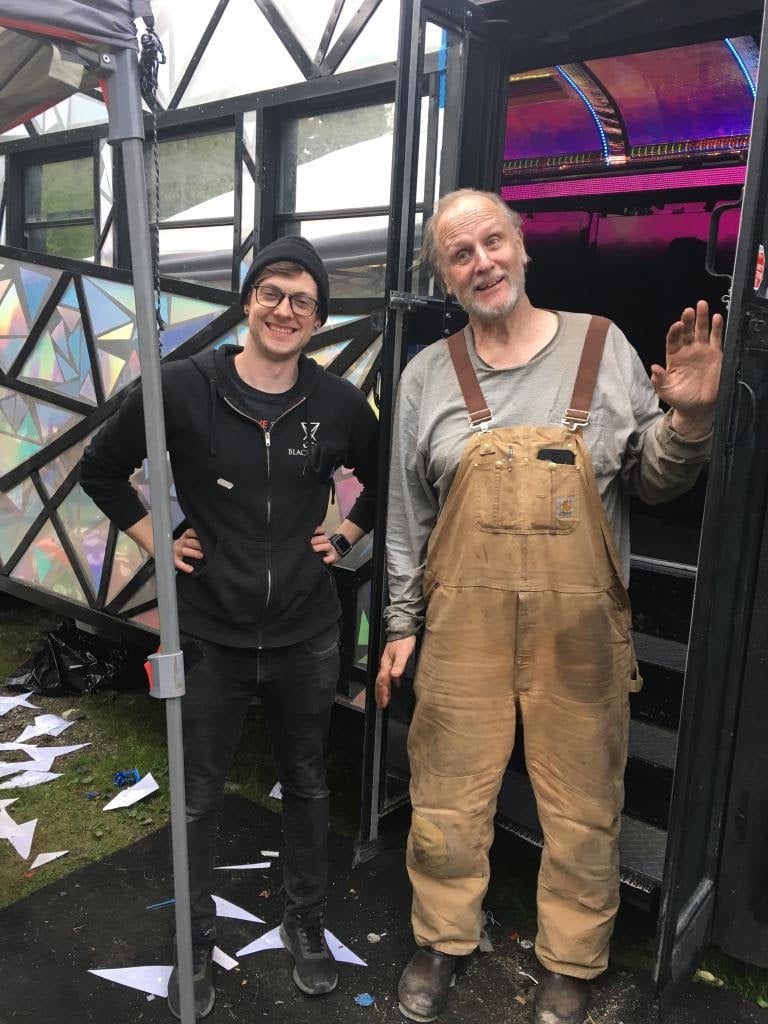 John Lipke is half of the brains behind this unconventional skoolie that bears an uncanny resemblance to a rhinoceros. He’s a retired engineer and lifetime tinkerer, a trait that he handed down to his son, Jack. 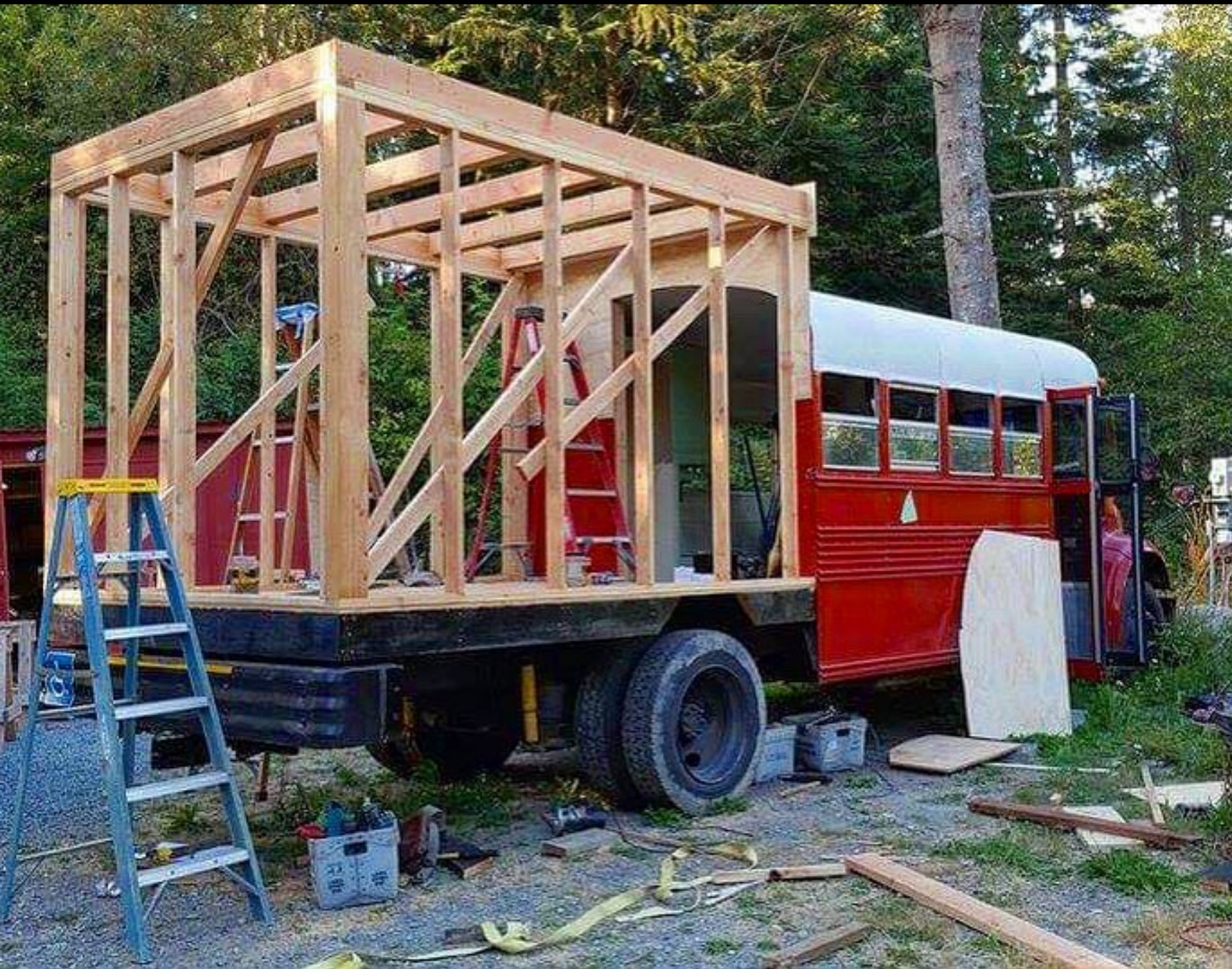 “My father is a lifelong builder and tinkerer, living independent and nearly off-grid, having designed countless electronic products and does woodworking and metal work for fun,” explains Jack. “I initially went to school for vehicle engineering, finished with an art degree, and worked in the video game industry before winding up in video event production at music festivals. The Rynobus is a big mix-up of all these experiences and interests.” 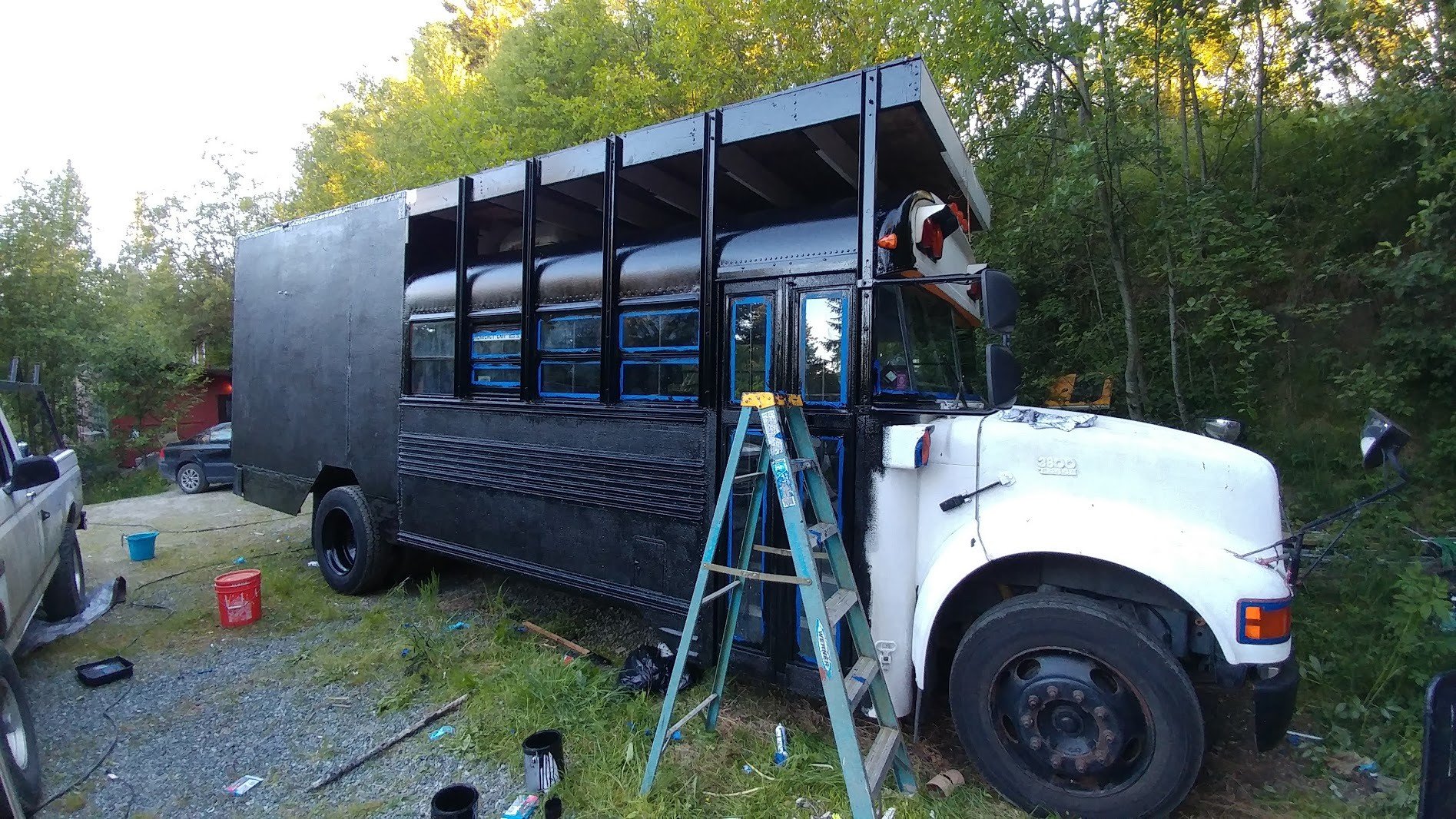 They reimagined a skoolie and turned it into a party stage.

Jack bought the skoolie simply to take it RVing to Burning Man. Today it’s so much more. “The day after I got the bus, I was already drawing plans to build a stage-style art car. I endlessly photoshopped pictures of the base bus into ideas of how to do this. My friends, naturally, were skeptical. I’d never even modified a regular car beyond putting new wheels on a Volvo.” 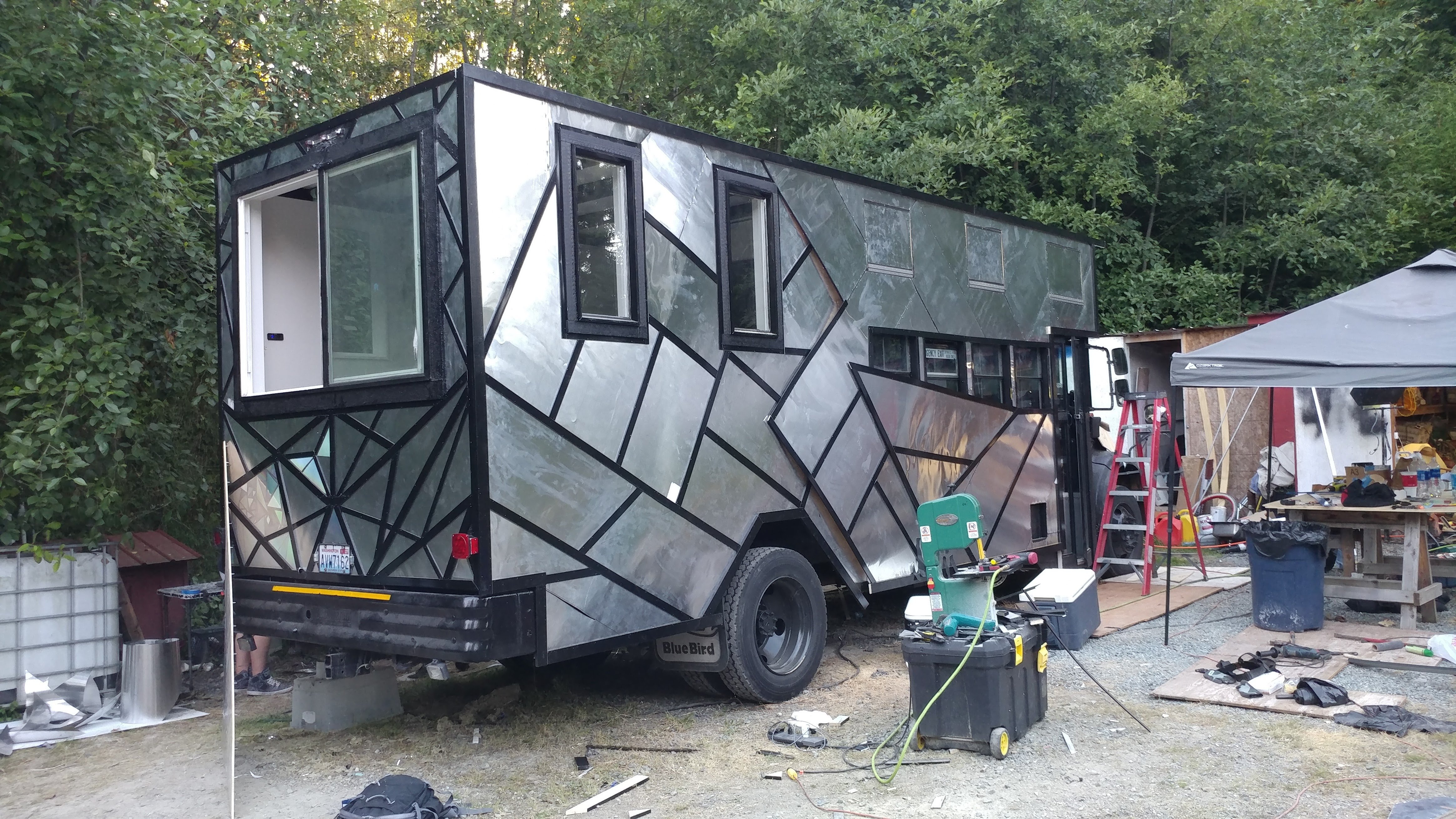 That’s where his dad came in. “So my dad is kind of a mad-scientist fabricator/inventor type, retired and formerly from the film audio engineering industry. He had help me gut and jazz up a Winnebago in college which was pretty fun, so I figured converting a school bus into an RV was right up his ally. This turned into an absolutely monumental undertaking that I’m frankly still surprised he’s down to work on to this day.”

Why the Rynobus is Different from other Art Cars 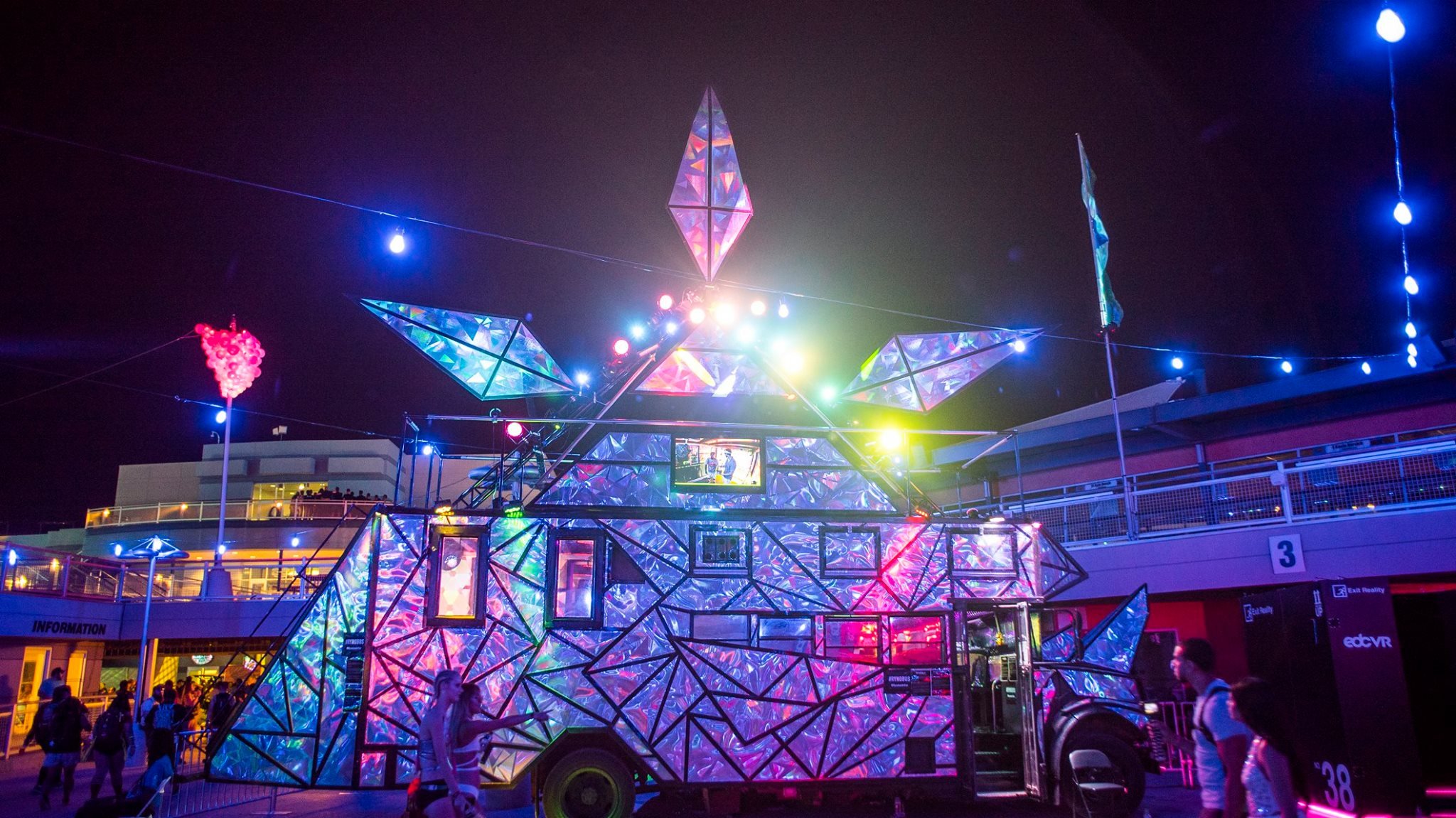 A flame thrower is included with every rental!

Art cars are always a labor of love and more often than not, require a large team and several hours to deploy at festivals and events. At first the Rynobus was the same way, but not for long.

“My dad and I set a goal,” says Jack. “Lets have this art car set up in under 6 hours, with a single worker. This is really where my dad took the lead on engineering. We had so many factors to consider. 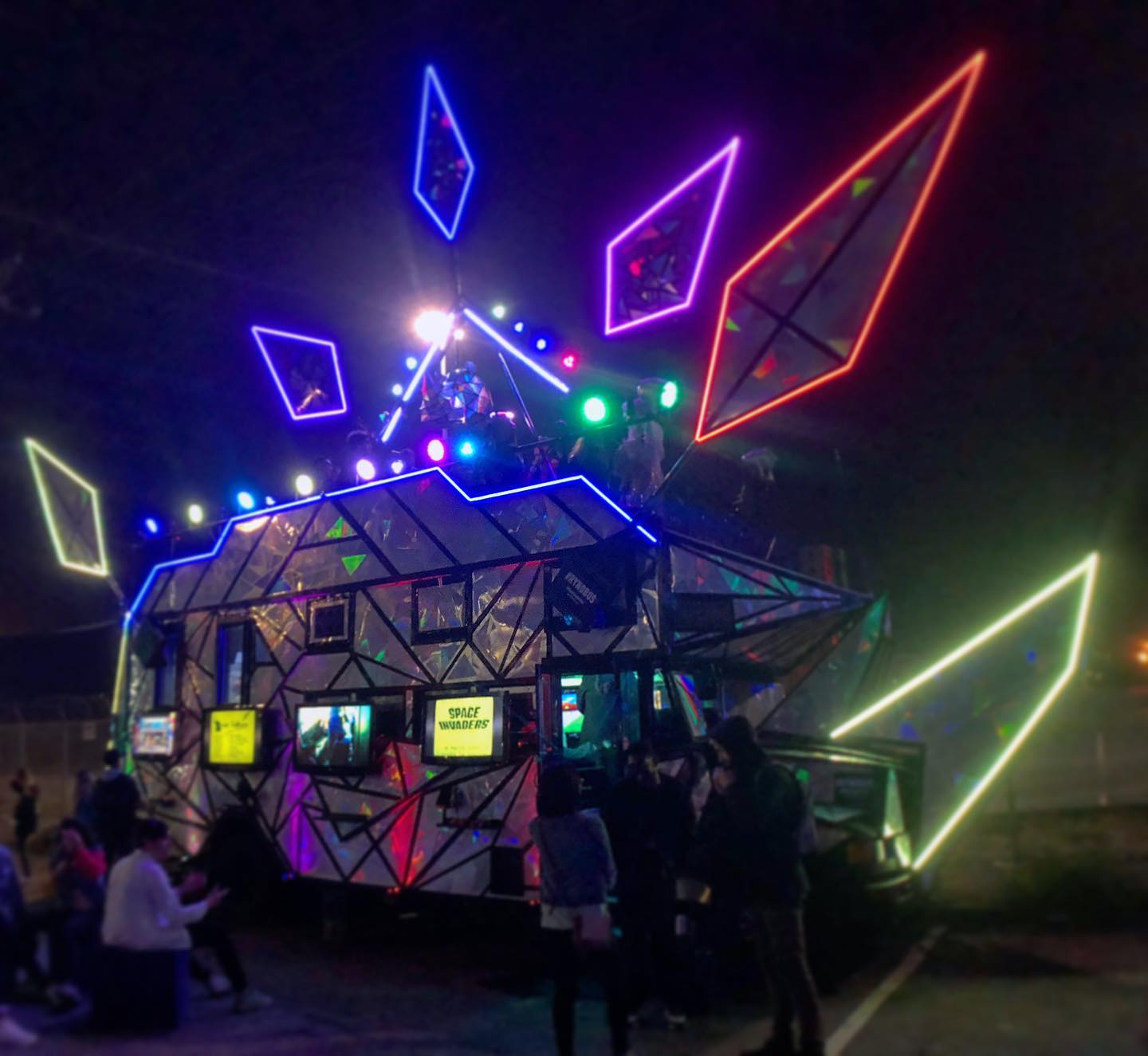 “These huge engineering changes were mostly invisible to the final product. But suddenly taking the vehicle was not a monumental chore, requiring coordinating of volunteers and scheduling days of set up time. We are now down to almost 3 hours set up time with just myself or with a friend,” says Jack. 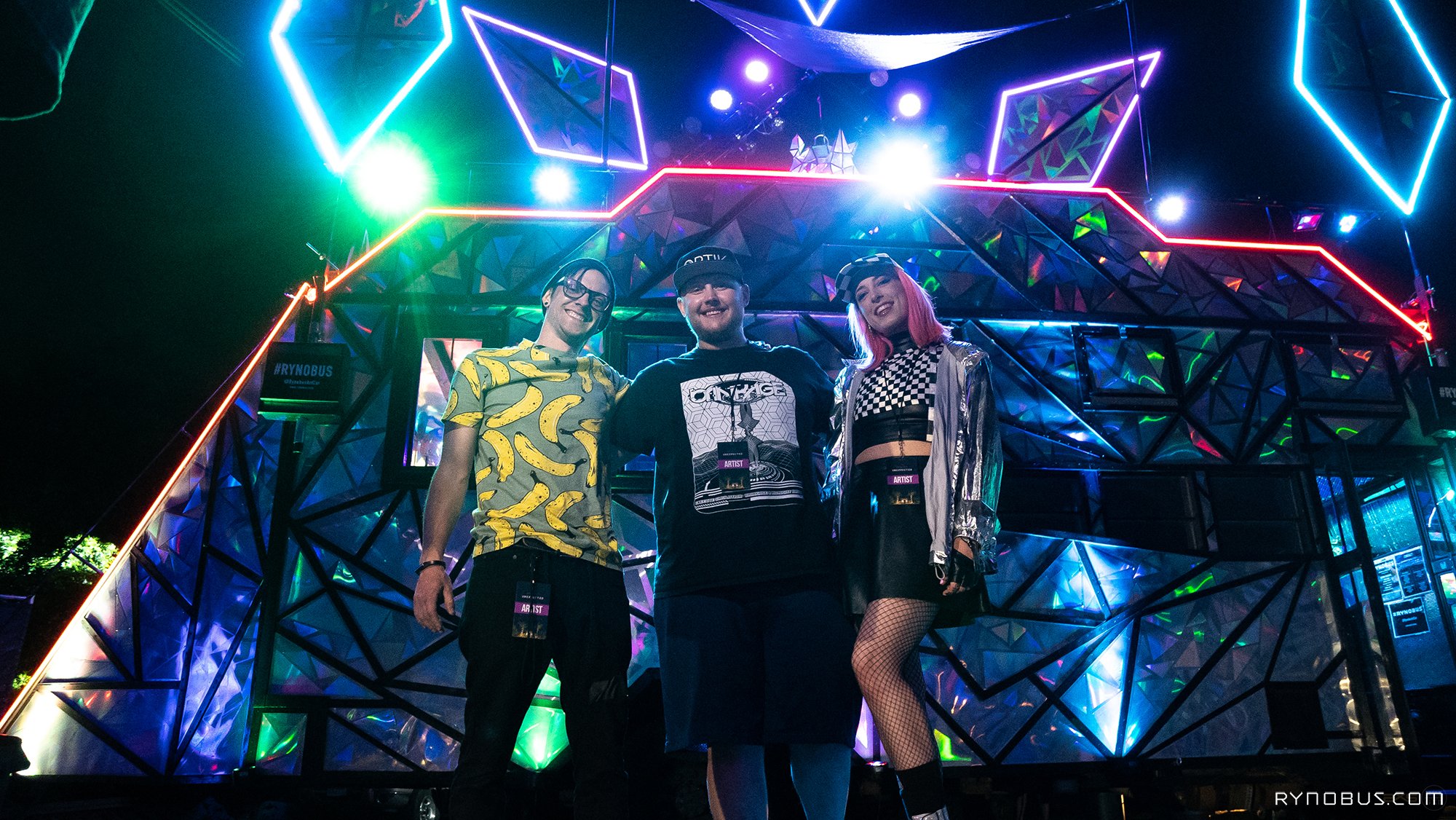 The Lipkes fabricated this otherworldly rolling part using polished aluminum, iridescent coating, and steel. “The Rynobus is built entirely by individuals in the Music and Live Event industry, so every part of the bus is constructed with shows in mind,” they share on the Rynobus website.

The Rynobus stand out from other art cars and mutant vehicles in another way. It features a large enclosed space that’s separated into two rooms. This area is designed for anything from a virtual reality demo space to after-party lounge or a greenroom for show biz performers. 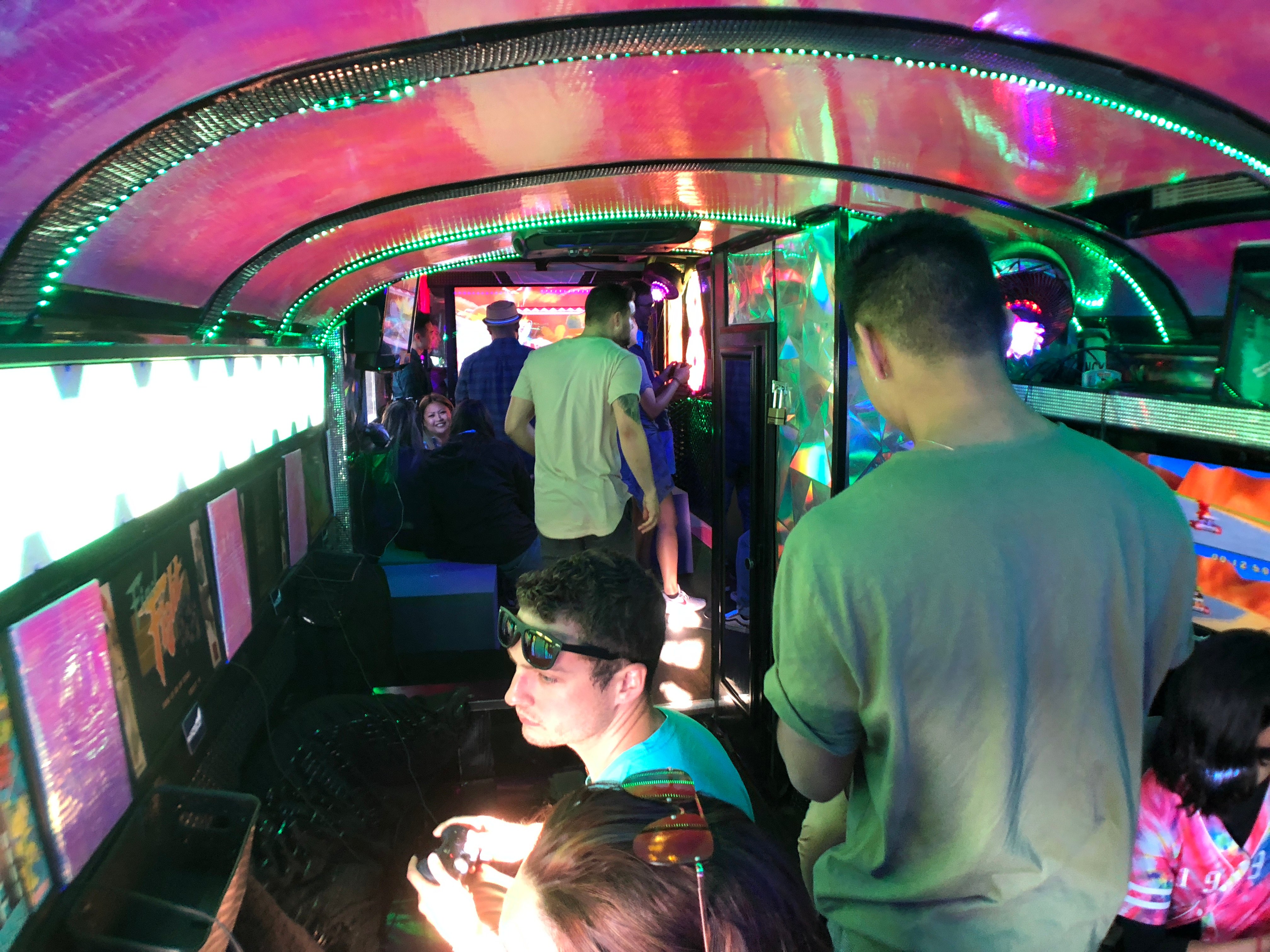 With thirty televisions, three air conditioners, a sink, refrigerator and multiple seating arrangements, the Rynobus welcomes up to 25 visitors at a time to enjoy the most high-tech sound, light and music experiences currently available.

Just one operator deploys the automated systems. Pistons and electronic lifts set up the party stage. The Rynobus RV features are totally customizable for different indoor and outdoor settings. 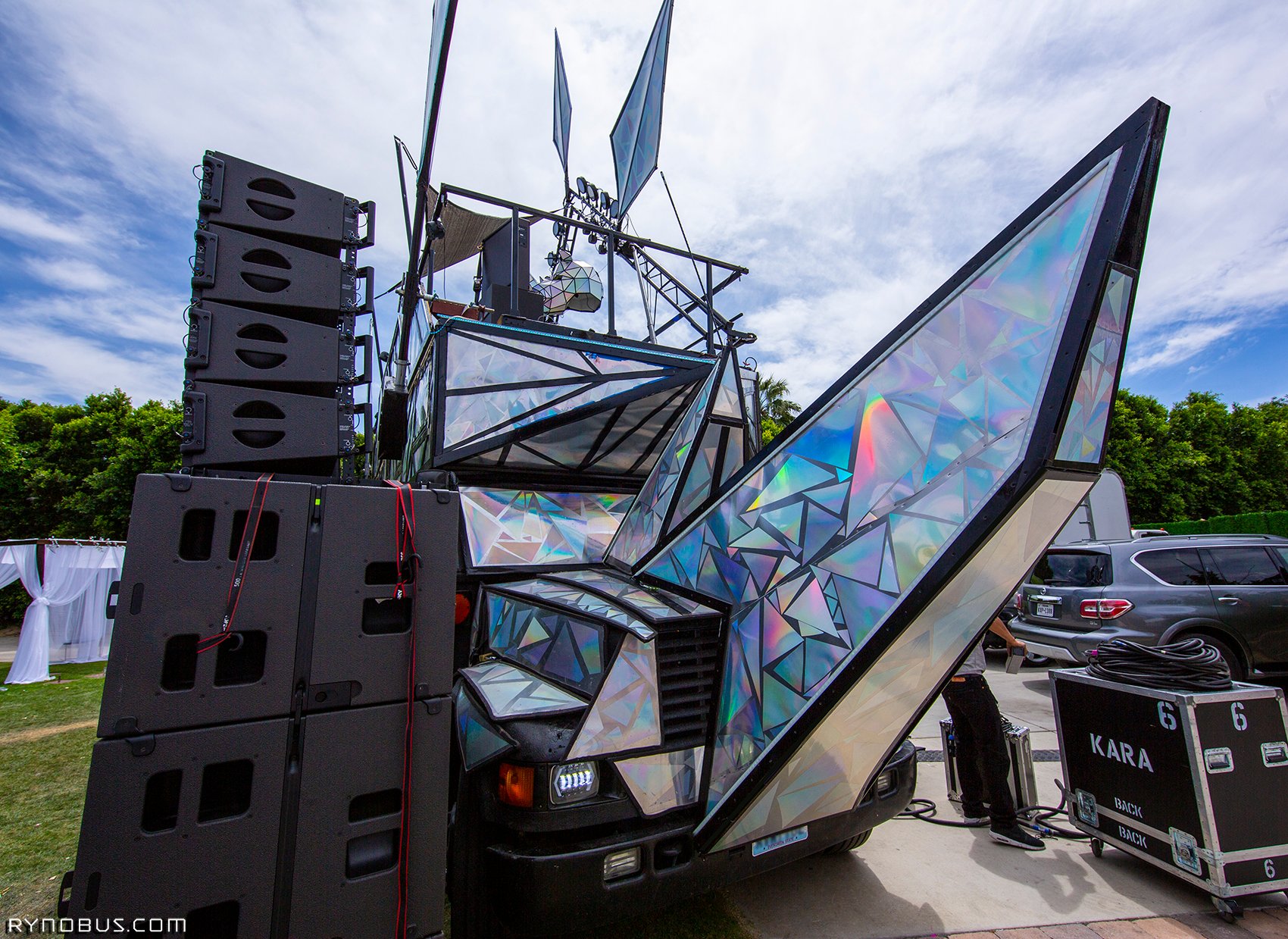 The Rynobus is also an event rental.

The Rynobus is available for rent and nearing its mission-complete stage, explains Jack. He’s ready to tackle fabrication of an all-new art car. “I’m looking at Tour-Coach sized options with RV slide-outs,” he says. “Ideally, I’d love to work on another stage-style art car with large moving hydraulic panels but with a multi-room interior experiences that’s more Meow Wolf than Arcade. Maybe even focusing on an interior that’s more a visually stimulating refuge and a contrast from the bass heavy flame throwing insanity we’ll try to cultivate outside.”