You are here: Home / Top Stories / Sacramento’s Golden History
This post may contain affiliate links or mention our own products, please check out our disclosure policy here.

The exodus from the Eastern U.S., Europe and the Orient was triggered by four little words: “Gold Discovered in California!” Some came by Conestoga wagons, braving the hardship of the plains, eluding enraged Native Americans, and challenging the snow-covered towers known as the Sierra Nevada Mountains. Others endured the hardships of traveling around Cape Horn in South America, or spent months crossing the Pacific Ocean in schooners, landing in the bustling port of San Francisco. They then made their way inland to the little burg known as Sacramento and its surrounding fields of golden opportunity.

What began as a trading fort near the Sacramento River ballooned into a thriving town. Today, the California Gold Rush is long past, but Sacramento still thrives as the state capital, with a population of over 450,000.

The seekers of glittering yellow nuggets a century and a half ago had to hole up wherever they could find a spot to camp. Today there are ample places to stay, unless you arrive in late July, when the state fair at Cal Expo is in full swing. Then, as I found out, it becomes a challenge. With exhibitors, vendors, carnies, concert groupies, and seers of sights converging on the city, campsites become a premium. My base camp was just southeast of downtown at a tree-covered encampment known as the Sacramento Shade RV Park. The name serves it well—late July is hot in the San Joaquin Valley and the towering trees are a cool blessing of relief. 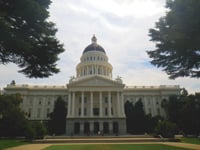 The search for gold in Sacramento these days doesn’t require a miner’s shovel, pan or rocker; it only requires a good city map. My search began in the State Capitol, the towering domed seat of state government modeled after the U.S. Capitol. There are two modes of touring, self-guided, as I did, wandering the halls looking at everything, or accompanied by a volunteer. The governor’s office is protected by a couple of California Highway Patrol officers and a sculpture of the state symbol, a giant grizzly bear. Any chance of my popping in to say “Hi” to Gov. Jerry Brown was foiled by his well-armed and enormously clawed security detail.

California has preserved many of the old offices that served before the latter-day additions to the Capitol. In the old governor’s office sits the phone that conveyed news that shook the city in 1906; San Francisco had been devastated by an immense earthquake and was on fire. 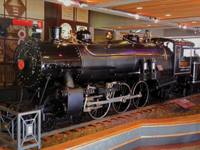 The state Senate and Assembly chambers are etched in rich wooden trim and polished desks of the same, and each room is carpeted in distinctly different colors. The Senate is bright red, the Assembly is green; if a confused representative gets lost all he has to do is look at his feet to determine where he is.

There is a state secret in the capitol—in the depths of the building’s basement is a well-stocked cafeteria. It is open to the public; after all this is the people’s property, so I took advantage, dining as the legislators do. Maybe I thought I’d get my chance to say “Hi” to the governor in the capitol eatery. Nope, Jerry wasn’t there either.

Next stop: the old governor’s mansion. The restored 1800s Victorian structure is elegant, but no longer used, except as a tourist site. I pushed on. Sutter’s Fort State Historic Park is only a short buggy ride from the mansion. It encompasses the history, hardships and life of the early arrivals. Also included at the state park is the California Indian Museum, an excellent tribute to the original land users.

Old town Sacramento is situated right on the Sacramento River, where riverboats once supplied the city with a high-speed transit system, and where replicas now take riders on a river tour. Old town is where the gold extracted by the mining prospectors was quickly dislodged from their pockets by saloons, hotels, mercantile shops, ladies of the evening and other shady sorts.

Sacramento was the western terminus of both the Pony Express and the first transcontinental railroad and there are tributes to that fact in Old Sacramento. A statue of a Pony Express rider recalls the days when wiry young riders traveled here from St. Joseph, Missouri, carrying dispatches and mail. The California State Railroad Museum recalls the completion of the transcontinental railroad, when immigrant laborers toiled in frigid snow and then sweltering desert heat to make the connection that linked the nation and lined investors’ pockets. 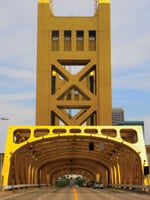 A short walk from the main street is Tower Bridge, which spans the Sacramento River. The former drawbridge’s two immense towers give it its name, but the paint gives it its fame and shines in the spectacular color of golden yellow.

Sutter’s Mill, where the Gold Rush began, is not too distant from the town that grew from the discovery. Outside the city are the fields of gold that lured those who rushed here to get rich quick. Still lying within the streams are some of the glimmering yellow flakes that drove the prospectors mad with “gold fever,” and with luck, a visitor might still find a minor “strike.”

Golden history is only a small nugget; there is so much more to be discovered in this city other than its historical side. As another California historic nugget, the late public television host and travel enthusiast, Huell Howser, would say on his admired TV travel series; the glitter of Sacramento is truly part of “California’s Gold!”

John R. Swaim is a retired computer systems analyst and RVer who lives in Ventura, California.  He has chronicled his travels in two comedic travel books that can be found at 5thwheelturns.com.