You are here: Home / Blog / Sail on the Titanic
This post may contain affiliate links or mention our own products, please check out our disclosure policy here. 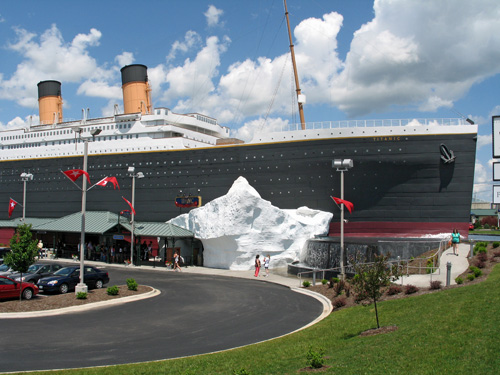 On a recent visit to Branson, Missouri, Lee and I were guests of the Titanic Museum. While we have toured the Titanic many times since it opened in Branson in 2006, each visit weaves its own spell of nostalgia, history, heartbreak, and triumph. We enter the replica of the famous luxury liner as guests, but we leave as Titanic passengers. Upon arrival, each guest receives the boarding pass and a brief bio of a passenger or crew member—a real person who sailed on that fateful voyage. For a walk through history, we become that person. Sometimes, we have been a first class passenger; other times, a second or third class. It does not matter. We experience the ship as that individual—and we do not know until the end of our tour if we survived or perished. 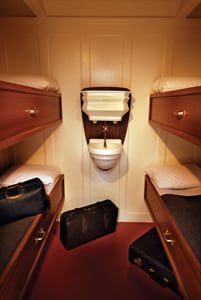 Each time I visit, I am caught up in the stories and the tragedy of what happened when the great ship collided with an iceberg on that cold, starlit night. Franz Karun was a third-class passenger, age 39, traveling with her four-year-old daughter. She ran a boarding house for railroad workers in Galesburg, Illinois, and had traveled to her native Slovenia to transact business. She and little Manca were returning to their new life in the United States.

Lillian Bentham, a second-class passenger, thought the Titanic was the most magnificent thing she had ever seen—surpassing all the tourist sights she and her group of ten friends had toured in Europe. Her godfather, a Mr. Douton, traveled with the group. She was returning to a new family home in Rochester, New York. When they were told the luxurious “unsinkable” ship was taking on water, she did not take any of it seriously. She watched people being loaded into lifeboats, but she thought it silly to leave such a big ship to be set adrift on the frigid ocean in a little boat.

And the stories go on and on. As we toured recently, our guide was the spirited and courageous Molly Brown; a survivor of the Titanic’s sinking. She led us through various levels and rooms depicting the famous ship, narrating her voyage from her viewpoint, reflecting more of the personality of the legendary Molly Brown, characterized in folk tales, a Broadway play, and eventually, the MGM movie, “The Unsinkable Molly Brown.” The myth of “Molly” Brown has little to do with the real life of Margaret Tobin Brown, although it speaks to her spirit. Margaret was never known as “Molly.” The name was a Hollywood invention. 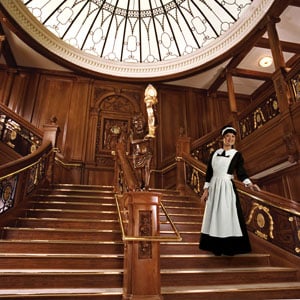 A Maid on the Grand Staircase

While touring with the John Jacob Astor party in Cairo, Egypt, Margaret Brown had received a message that her first grandchild was ill. She booked passage for New York immediately; the earliest ship she could get was the Titanic. Traveling as a first-class passenger, few people knew she was aboard—despite the fact that Margaret Tobin Brown had already made a significant name for herself advocating literacy, education, women suffrage, and human rights in Colorado and throughout the United States.

After the ship struck the iceberg, Margaret Brown helped load others into lifeboats and eventually was forced to board lifeboat six. She and the other women in that wobbly boat worked together to row, keep spirits up, and dispel the gloom generated by the emotional and unstable Robert Hichens. However, Margaret’s most significant work occurred on the rescue ship, Carpathia, where she assisted Titanic survivors onboard and afterwards in New York. By the time Carpathia reached New York’s harbor, Margaret had helped establish the Survivor’s Committee, been elected as chair, and raised almost $10,000 for destitute survivors. Her language skills in French, German, and Russian were an asset, and she remained on Carpathia until all Titanic survivors had met with friends, family, or medical/emergency assistance. Not until then did she realize she was still in the same salt-brined dress she wore when getting into lifeboat six. Many called her the “Heroine of Titanic,” a title she humbly denied. 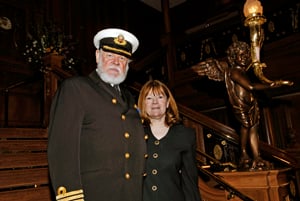 The guide Molly Brown led us to the Grand Staircase, a focal point in the museum, and costing more than $1million dollars to replicate. The stairs lead to a reproduction of a first-class cabin and also the first class dining room, sections of the ship where Margaret Tobin Brown would have frequented during the voyage. Dinner menus are posted for each class. Throughout the tour, memorabilia and personal information about various passengers is exhibited.

The Titanic Museum Attraction in Pigeon Forge, Tennessee, opening in 2010, is a larger version of the museum in Branson. Both are created by John Joslyn, who also was behind the live 1986 TV show, “The Mystery of Al Capone’s Vaults” and the 1987 “Return to the Titanic…LIVE.” That particular show, hosted by Telly Savalas, was about Joslyn’s expedition to the Titanic. Wall screens in one section of the two museums continuously run film of the mission. 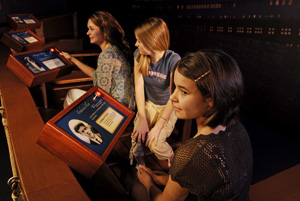 Guests Sit in Reproduction Lifeboat and Listen to Stories of Survivors

Interactive exhibits and also changing themes keep the museums fresh and interesting to guests on repeat visits. For example, on March 7 through May 29, 2016, the RNS Titanic Violin that belonged to Bandmaster Wallace Hartley makes its first public display since its auction to an anonymous European collector for $1.7 million dollars. Co-owner of Titanic Attractions, Mary Kellogg-Joslyn, explains:”Bandleader Wallace Hartley’s violin has become the iconic symbol of the Titanic saga. Found strapped to his body after the sinking, it was returned to his wife-to-be, only to be lost to the world until it resurfaced almost a century later.” Now under an exclusive arrangement with auctioneers Aldridge & Sons and the secret owner they represent, the cherished violin will be on display in the Branson museum, and later, on June 5 through August 14, 2016, at the Pigeon Forge, Tennessee facility.

Kellogg-Joslyn continues: “The Titanic violin may never be played again. But one of the final songs Wallace Hartley was said to have been playing during the ship’s final moments can still be heard in our imaginations:

Nearer, my God to thee;

Nearer, my God to thee, 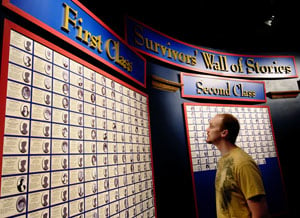 While the tragedy of the sinking of the Titanic is solemn—some might say depressing—the story is staged throughout the museum in interesting displays. For instance, one can dip a finger into water that is the temperature of the ocean on that night. Portions of the deck incline at different levels to demonstrate the ship’s listing at ongoing times during its sinking. One can sit in a replica of a lifeboat and press a button to hear different stories of survivors. Enlarged newspapers cover one wall, reporting the tragic sinking—and also questioning how and why it happened. I also come away with questions. Why were there not adequate life boats? Why were some of the lifeboats not filled to capacity? Why was the ship steaming over a known ice field at that rate of speed? Why did boats nearer than the Carpathia not respond to the calls of distress? All these questions and more will never be answered.

Over the past 100 years, the tragedy of the Titanic has turned into a story—one that is often romanticized by movies and books. Slowly over the last century, the painful memories of those who survived, as well as the families of those who perished, have made their way into history. The last survivor, Millivina Dean, died in 2009 at age 97. Lillian Asplund, the last one who had any memory of the night, died three years earlier at age 99. Does this mean that the Titanic Museums merely hold stories—and not the calamity of that fateful night? No, both museums go far beyond relating the stories—those of heartbreak, of courage, and even heroism. Co-owner Mary Kellogg-Joslyn notes that at the museums, they pay tribute to the victims, many of whom were simply on board a sinking ship at the wrong time. Others who went down with the ship, perhaps made human errors: the Titanic’s captain, Edward Smith, who must have approved of the vessel’s speed; chief officers on the mighty ship. Engineers who kept the lights on until the end. Then there were the musicians, led by bandleader Wallace Hartley, who continued playing hymns until the majestic vessel broke in two and slipped into the black ocean waters. Ironically, J. Bruce Ismay, head of the White Star Line, who was responsible for the Titanic having so few lifeboats, escaped to one. The stories go on and on, some short; others, merely a snatch. Yet, together they make up a tapestry that tells the bigger story of a ship destined to be the greatest ever built—believed to be unsinkable—and yet, on its first voyage turned into the catastrophe of the century.

The Titanic Museum transports guests to a time more than a hundred years ago and into the lives of those who lived in elegance, and those who traveled on that great ocean liner and had perhaps, never before had indoor plumbing. Yet, the museums are also a forum for history, a saga that new generations need to know, to ponder, and to place alongside other tragedies and disasters in our world—times when bad things happened unexpectedly and even unjustly, engulfing innocent people. The Titanic’s stories are timeless—worth repeating and adding to our memory banks.

For more information go to www.titanicattraction.com. Reservations are recommended for the exhibition of the Wallace Hartley Titanic violin. Call 1-800-381-7672.